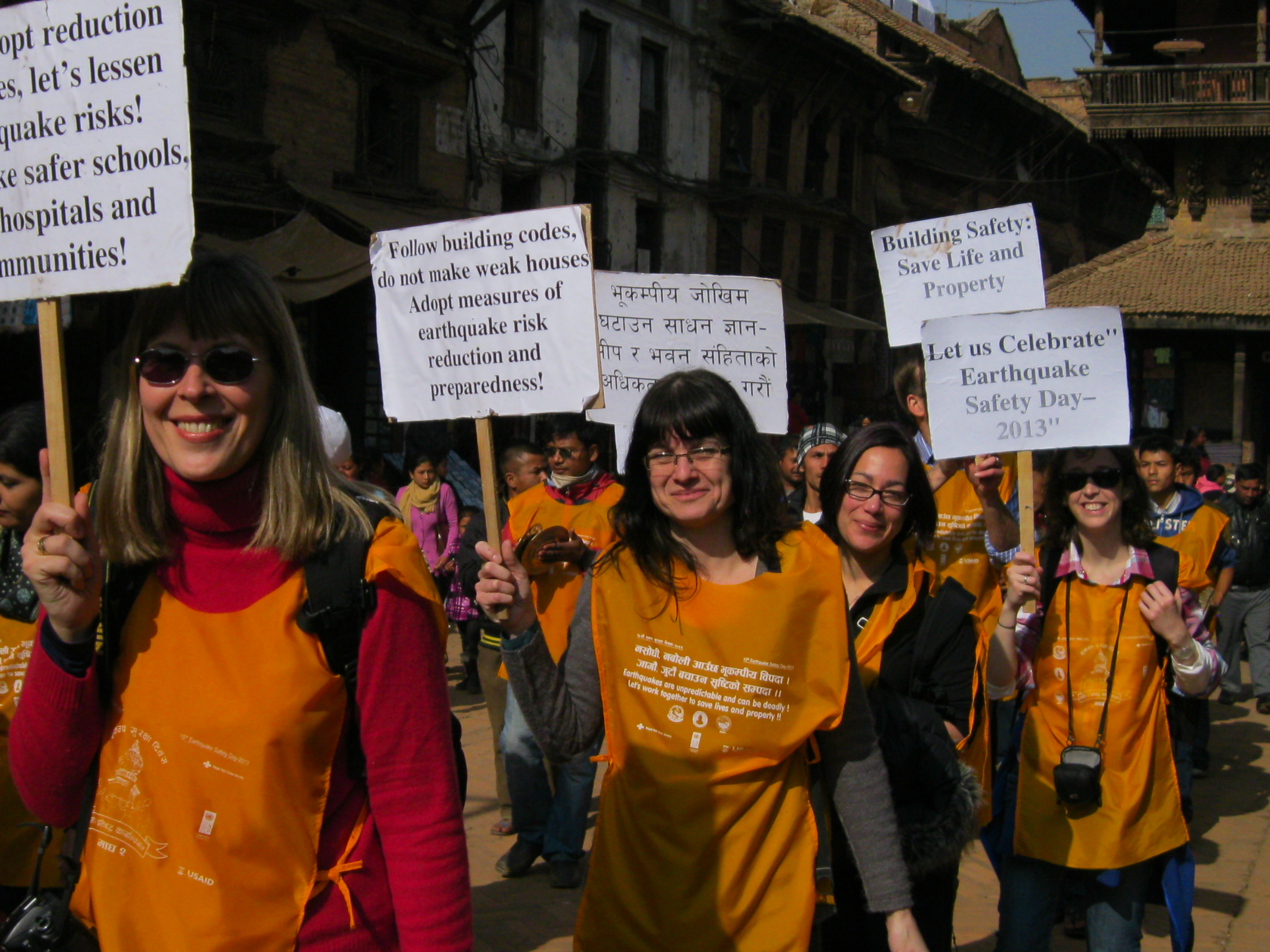 Members of the EwF team participating in the National Earthquake Safety Day in Nepal in Bhaktapur in January 2013.

The Earthquakes without Frontiers project was launched in Nepal and Bihar State in January 2013.  The launch events, organised in collaboration with our project partners, brought together more than 50 national level stakeholders involved in earthquake risk reduction in Nepal and Bihar with the aim of refining the research questions so they are relevant to stakeholder needs.

With the aim of ascertaining how science can be used more effectively to inform policy and practice.  Preliminary conclusions can be found here.

The second phase of the research (2014-15) focused at the community level.  Four to five case study areas (both urban and rural) were identified in collaboration with our local partners for more detailed research.  These follow a transect through Nepal and into Bihar State with the aim of capturing different geological and cross-border settings.

Research topics emerging from discussions with stakeholder partners include:

At the same time, we have been investigating patterns of earthquake-triggered landslides, trying to develop a quantitative understanding of how landslide material moves through the landscape after a large earthquake; an activity given particular urgency following the 2015 Gorkha earthquake (below). This phase of the research builds on existing models of slope stability that predict the size and shape of shallow landslides, and that simulate the damaging effects of repeated earthquakes on hillslope materials. We will test our model outputs against compilations of earthquake-triggered landslides from recent events in Pakistan and China.

An EwF meeting was held in Kathmandu in April 2015, 10 days before the Gorkha earthquake.  This was a very successful 3-day interaction between EwF researchers and colleagues in NSET (National Society for Earthquake Technology) in Nepal, who hosted the meeting.  The event was also attended by collaborators from Bihar State Disaster Management Agency in India and by other principal EwF partners from Iran, China and Kazakhstan.  Discussion focussed on the situation in Kathmandu and Nepal/north India and was inspiration for all concerned, and many important new relationships and collaborations were formed.  Of course, at the time nobody was aware how imminent was the Gorkha earthquake, which occurred two weeks later.

The Gorkha earthquake of 25 April 2015 has been a major focus of the EwF team since it happened.  Activity has been principally in: 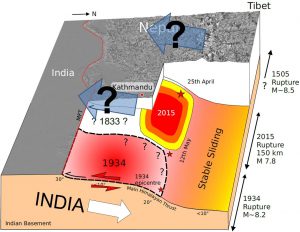 The 2015 Gorkha earthquake only ruptured the lower (10-20 km) part of the Main Himalayan Thrust, on which India slides beneath Nepal, unlike historical earthquakes, such as in 1934, which broke all the way to the surface. The shallower part will eventually move, probably in a future earthquake, and the movement in 2015 has also increased the likelihood of movement to the west of the 2015 earthquake, which last broke in a great earthquake of 1505. A substantial earthquake threat therefore remains. See Elliot et al (2016). Cartoon by John Elliott.

Among the deliverables and consequences were: