The Seismic Future of Cities

Seismologists have pointed out for decades that the relentless rise in global population and the growth of megacities in the developing world are bringing enormous numbers of people within range of potentially devastating earthquakes (e.g. Tucker, B. E. Trends in Global Urban Earthquake Risk. Seismol. Res. Letts. 75, 695-700, 2004, Bilham, R. The Seismic Future of Cities, Bull. Earthquake Eng., 7, 2009.) It is obvious from the figure below that many of the world’s megacities are closely associated with places where, in the last millennium, earthquakes have caused tens and hundreds of thousands of deaths. 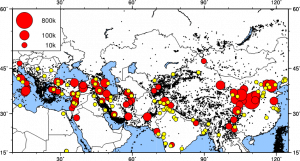 The close association between cities and earthquakes is not a coincidence; it is a legacy of history and geology. These cities were originally small habitations located at the foot of mountain ranges. The mountains are bounded by faults that lift the mountain ranges, creating the topography that allowed the cities to control access to trade routes, and delivering a supply of water to otherwise inhospitable terrain. Within the relatively recent past, these small habitations have grown into megacities (Jackson, J. Fatal attraction: living with earthquakes, the growth of villages into megacities, and earthquake vulnerability in the modern world. Phil. Trans. Roy. Soc. London A, 364, 1911-1925.)

About 85% of the world’s fatal earthquakes have occurred within Eurasia and the severity of this threat is increasing rapidly as millions of people every year migrate into megacities in vulnerable locations, many of which were devastated by earthquakes in the past, when their populations were much smaller. A fundamental problem is that devastating earthquakes such as those in Bam, Iran in 2003 (30,000 deaths), Muzzafarabad, Pakistan in 2005 (75,000 deaths) and Wenchuan, China in 2008 (70,000 deaths), almost invariably take place on faults that were either previously unknown, or whose threat had not been recognized (England, P. & Jackson, J. Uncharted Seismic Risk, Nature Geoscience, 2011, 4, 348-9). 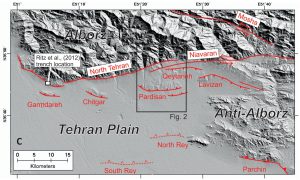 Topography of the Tehran plain, with active faults drawn in red. The North and South Rey ‘faults’ are dotted, due to uncertainty about whether their scarps are formed by faulting. From Talebian et al (2016), Active faulting within a megacity; the geometry and slip rate of the Pardisan thrust in central Tehran, Iran, Geophys. J. Int., 207, 1688-1699. 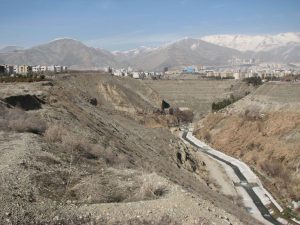 View taken in 2008 north up a gorge cut by a river flowing south through the uplifted anticline above the Pardisan blind thrust in Tehran, Iran. Natural features of the gorge are now almost entirely obscured by construction. Photo: Morteza Talebian. See also here.

An important part of the Earthquakes Without Frontiers project has been work with partners in prominent Asia cities, such as Almaty, Tehran, Bishkek, Ashgabat, Tabriz and Xi’an, to find the faults that threaten these cities, and to improve our understanding of them.  For most of the people living in these cities the previous destructive earthquake was before living memory and earthquake risk has a low priority, despite the increasing vulnerability related to urban growth and development.