Our past field work campaigns in Kyrgyzstan and Kazakhstan focussed rather on the northern edges of the Tien Shan because we wanted to understand, among other things, where the deformation front is and how deformation propagates into the forelands. In our most recent trip to Central Asia we visited a number of interesting sites in the central parts of Kyrgyzstan. Before we started off we analysed satellite imagery and digital elevation models and observed evidence for dip-slip and strike-slip faulting in the very centre of the mountain chain.  This led us to think about where the Tien Shan is deforming internally, at which rates, and if we can find out which faults ruptured in the recent past. Finding these faults, determining their slip rates, and dating the last surface rupturing earthquakes will allow us to address a number of interesting questions: 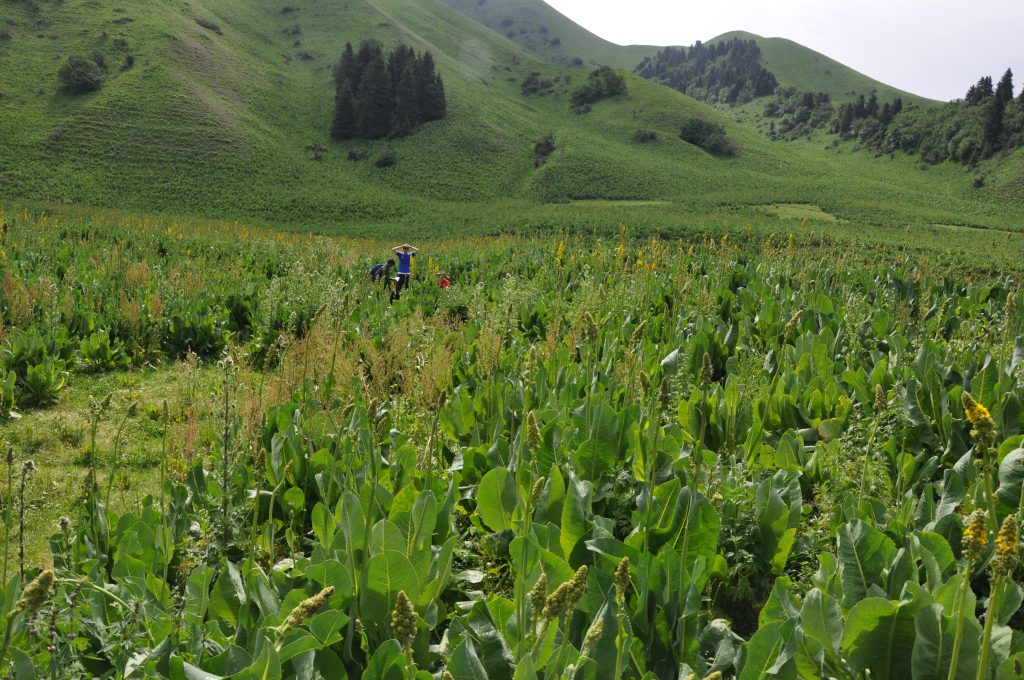 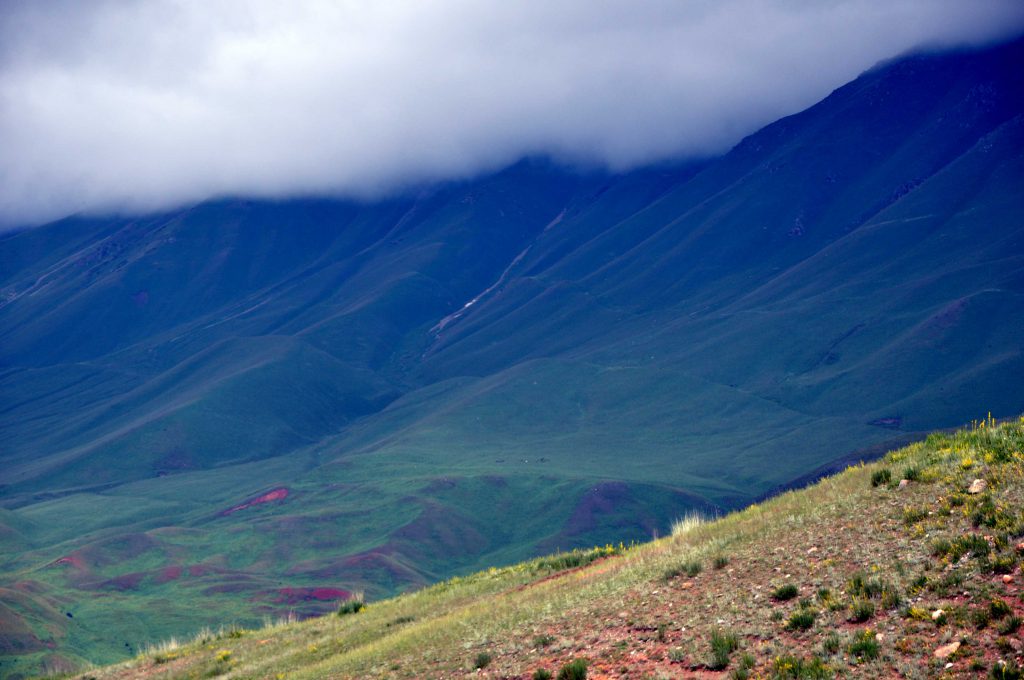 A set of uphill-facing fault scarps. 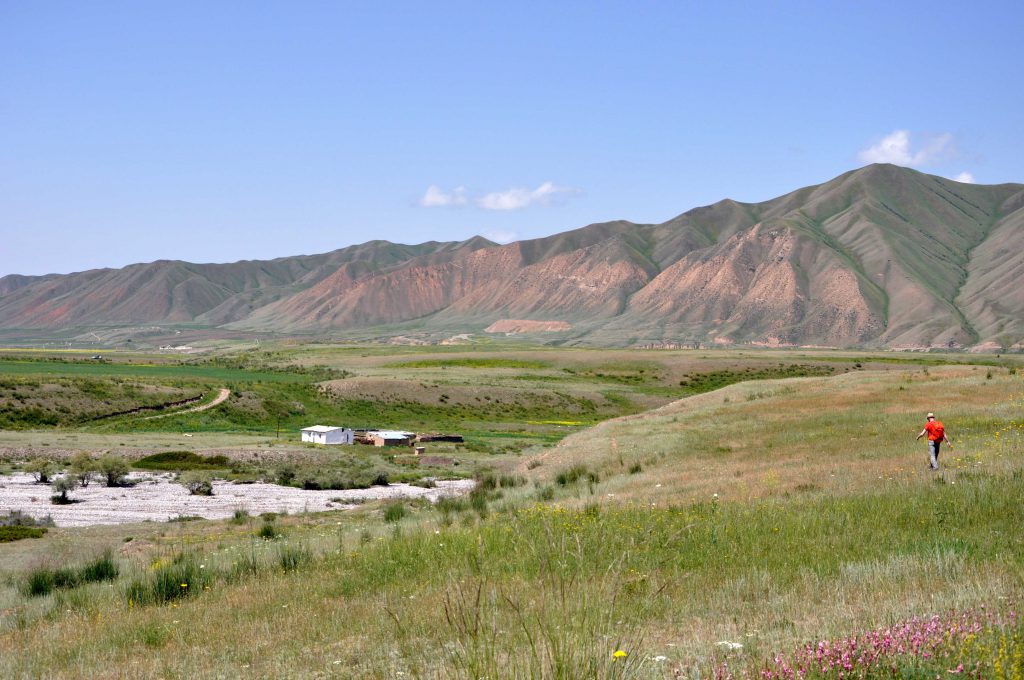 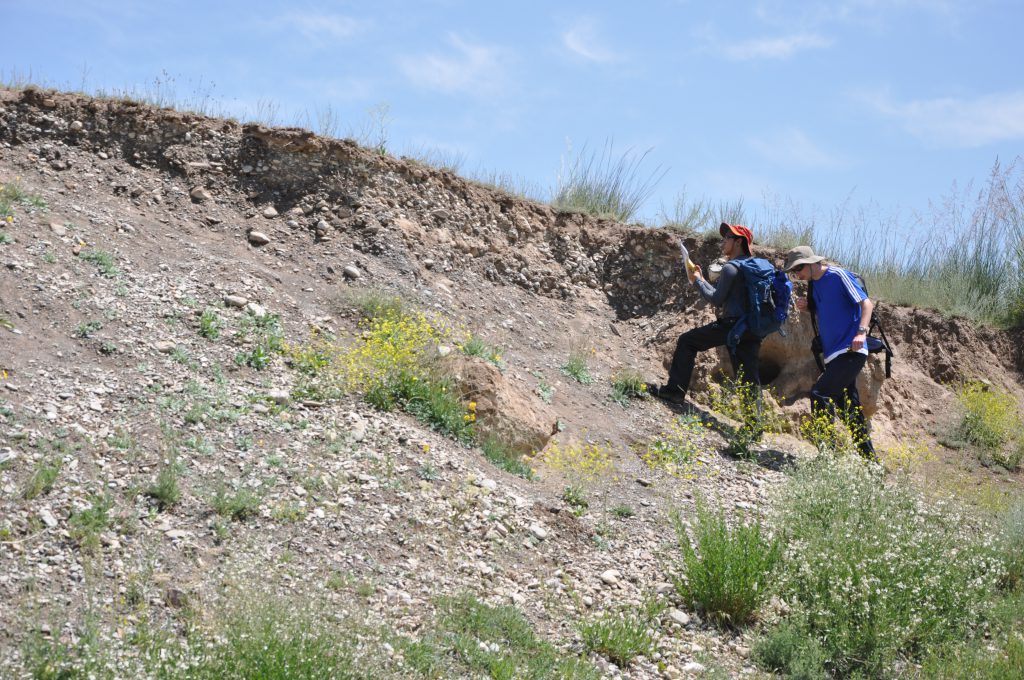 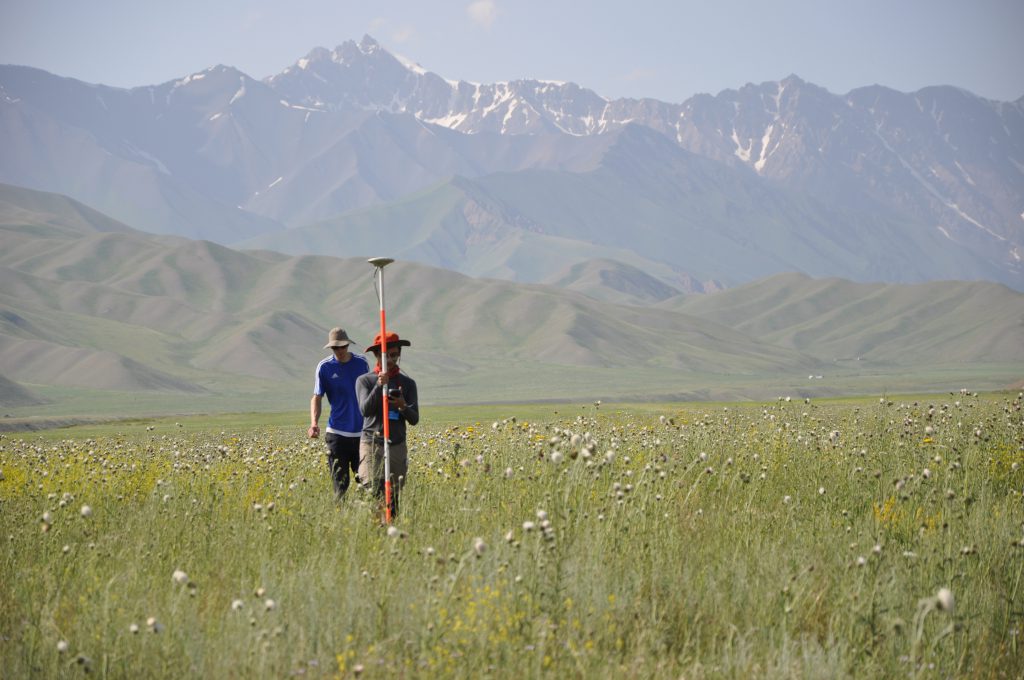 DGPS surveys were run to measure the offsets across the fault.

We were a team of scientists from Oxford (Richard Walker and John Dianala) and Cambridge (Andy Howell and Christoph Grützner, now at Jena University), led by our colleague Kanatbek Abdrakhmatov from the Institute of Seismology in Bishkek. Our first target was located near the famous Naryn Basin. A set of huge uphill-facing fault scarp is developed here in one of the steep slopes, and we even found very young fluvial surface to be offset by the fault. However, attempts to excavate and date the most recent offset had only little success due to the very shallow groundwater table. It was decided to at least produce a high-resolution elevation model (DEM) so that we can analyse the morphology of the site. Several hundreds of aerial photos captured with our drone will be used to compute the DEM. 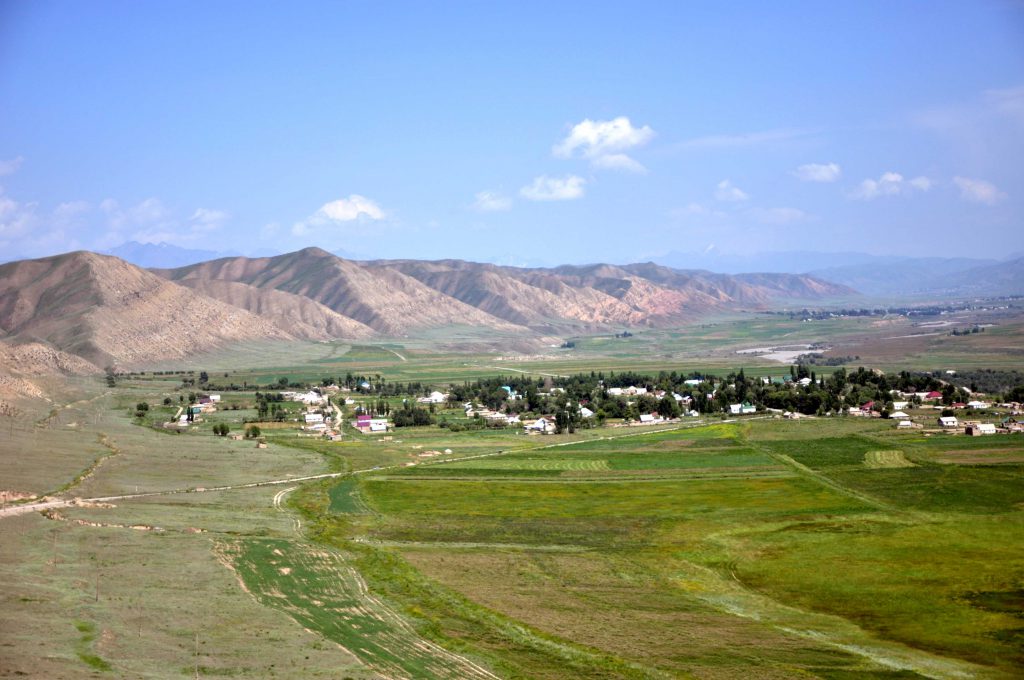 Tilted layers testify to Neogene-Recent faulting and folding near Naryn. 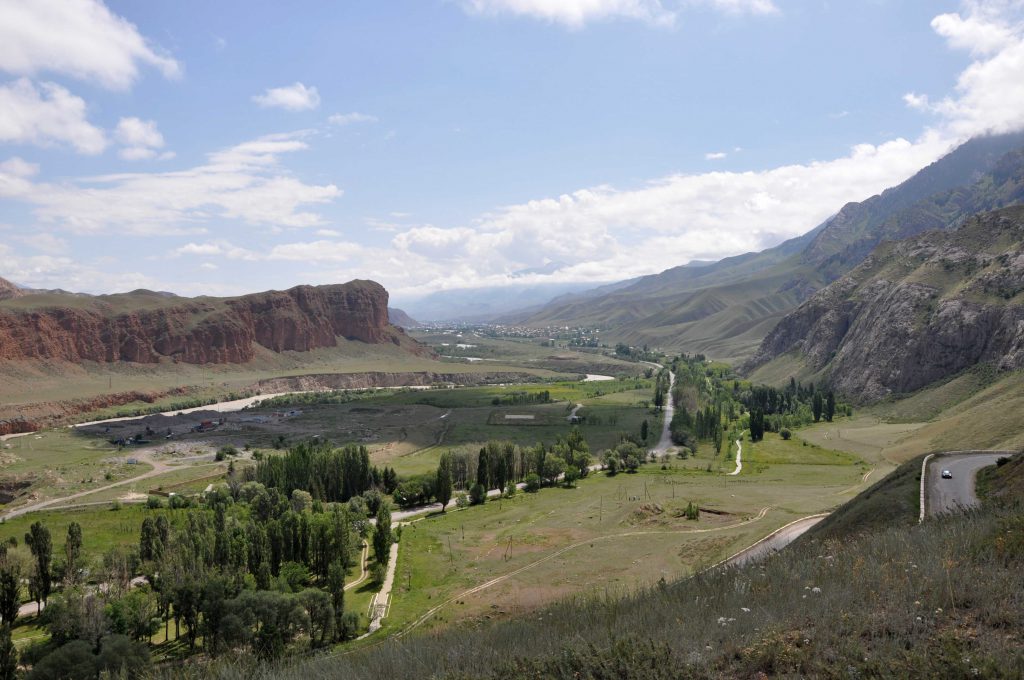 Tilted Neogene rocks, the fault crops out near the river. 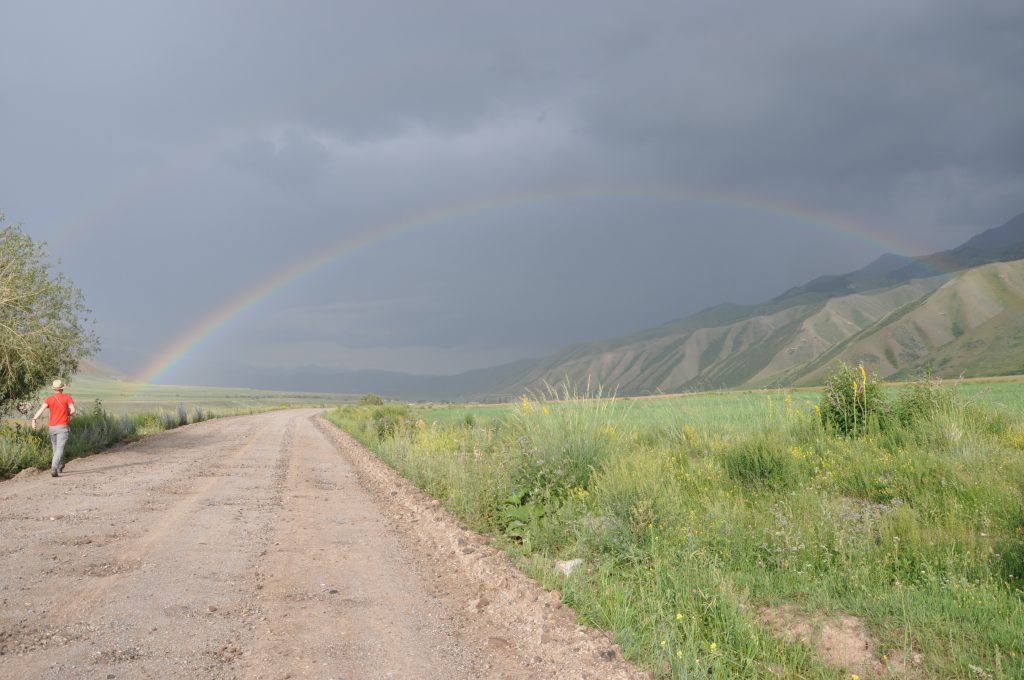 Teh fault is probably at the end of the rainbow.

In an adjacent flood plain we also encountered offsets in young surfaces and we droned a large area in order to precisely measure the amount of offset and possibly also the slip vector of the fault. We then moved on to higher ground and surveyed a fault in the high mountains south of Naryn. The fault scarps is somewhat degraded here and this rupture is probably a bit older than the ones we had seen before. We traced it for several kilometres and droned a good part of it. A long hike into the high mountains, always following the scarp, not only led us to discover some interesting sites, but we were also stunned by the wonderful hospitality of the locals who invited us to their yurts and served fresh bread and fermented horse milk (Кымыз). 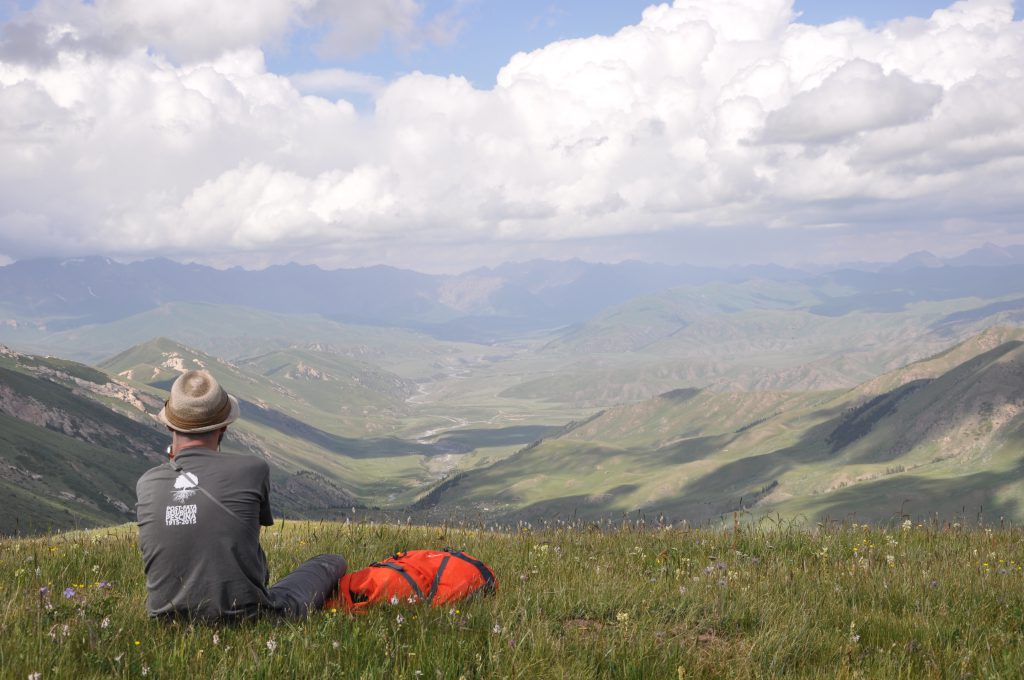 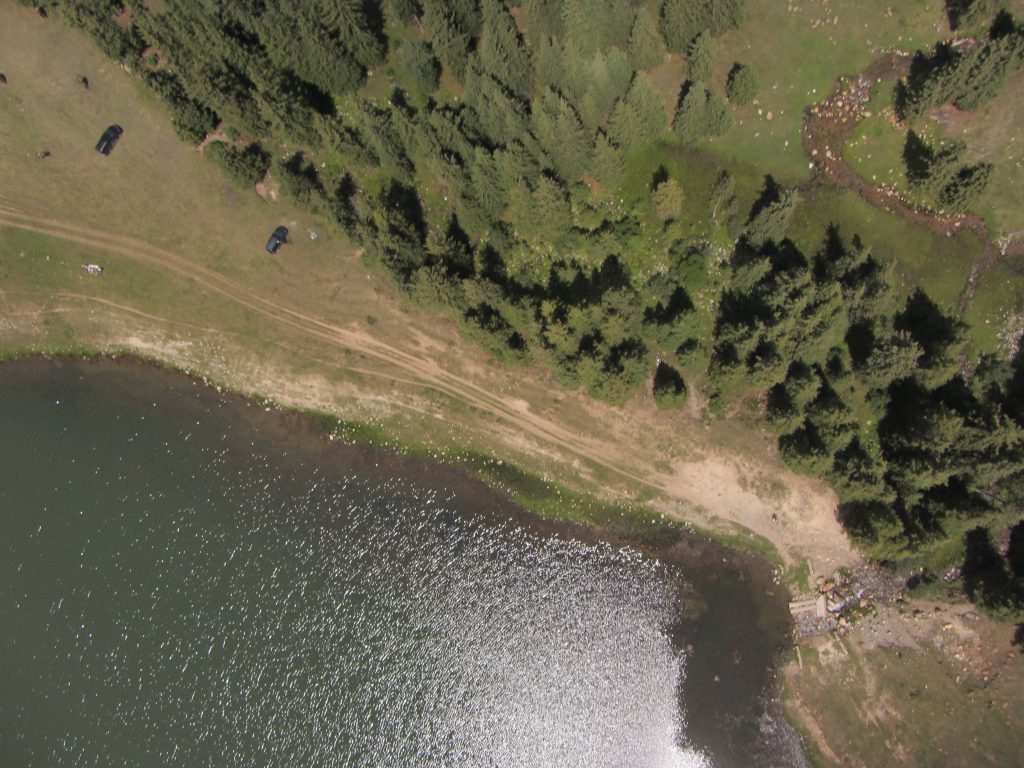 Aerial photograph of the scarp that formed during the 1911 Chon-Kemin Earthquake and now blocks a little stream. 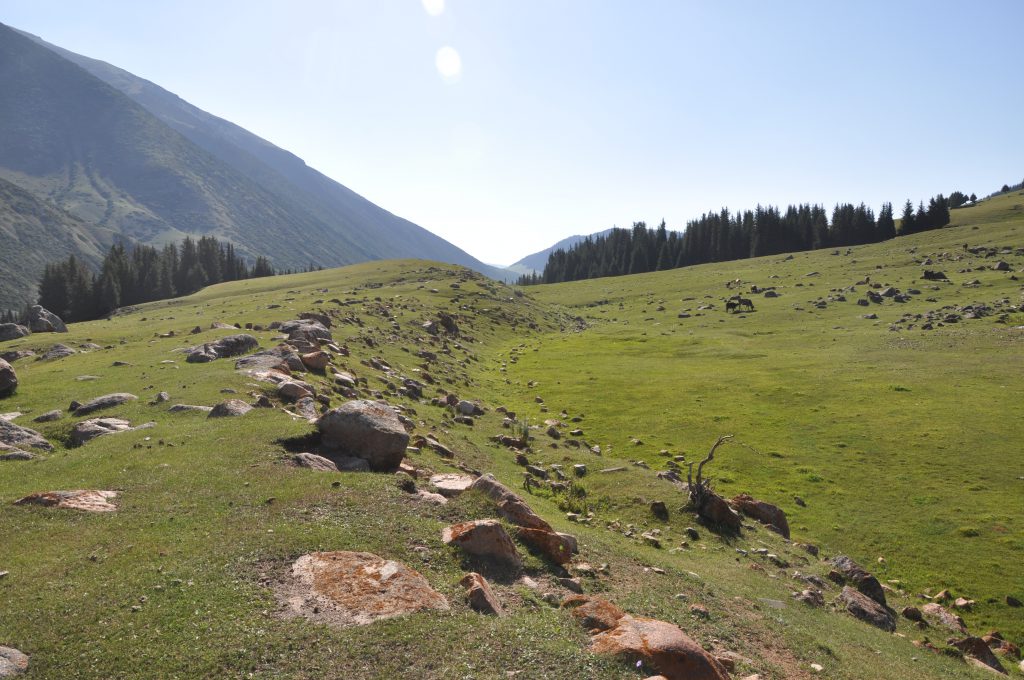 This scarp formed in the 1911 Chon Kemin Earthquake (M~8) and dammed a small stream. 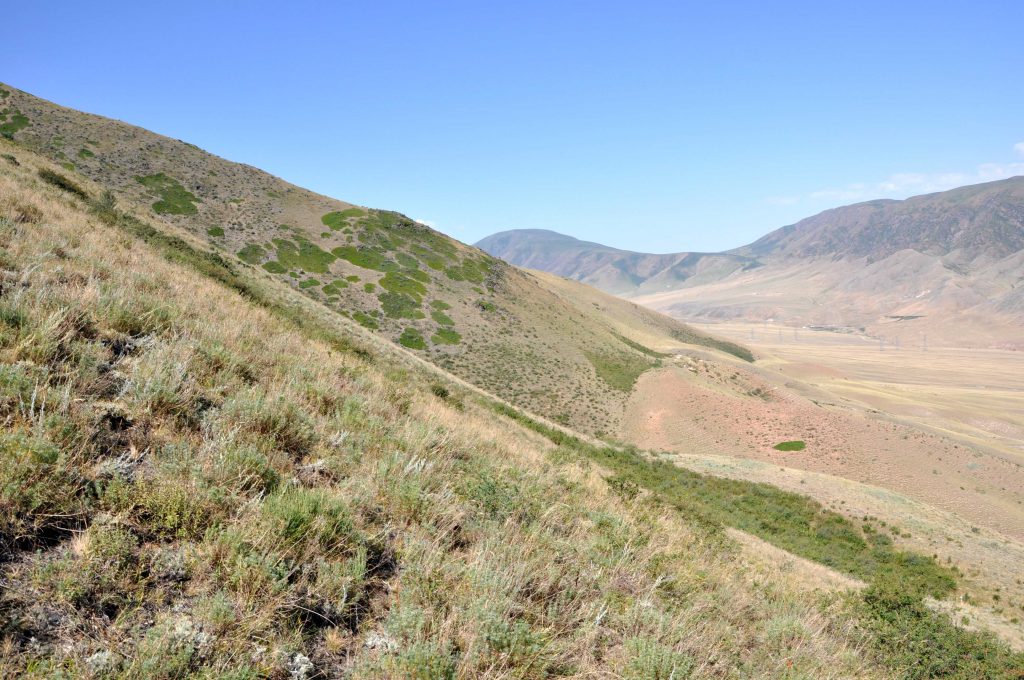 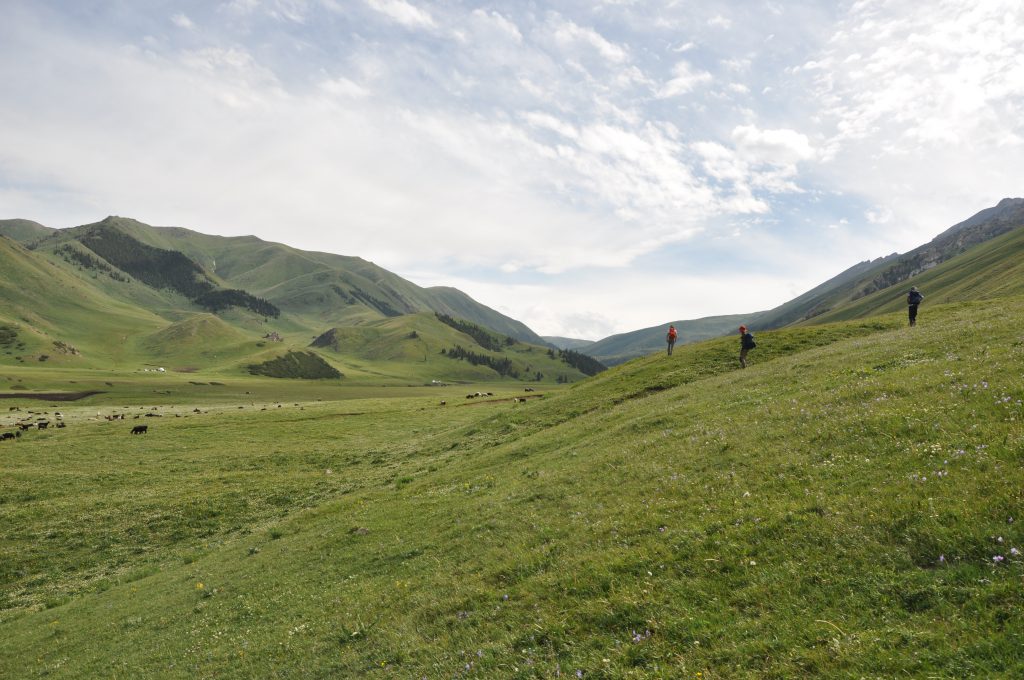 A cluster of earth scientist climbing the fault scarp.

Our last study site was located at the northern coast of Lake Issyk Kul, where we mapped a thrust fault and a strike-slip fault. The latter had a rather faint expression in the landscape, while the thrust fault showed a scarp of several metres height.

We thank our driver and our cook, and we are grateful to Kanatbek because as always he perfectly organised the logistics and showed us the best outcrops in the region.