The Main Kopeh Dagh Fault in Turkmenistan is more than impressive. It’s a NW-SE trending right-lateral strike-slip fault with a wonderful morphological expression that can be traced for several hundreds of kilometres. This fault marks the northernmost deformation front of the Eastern Iran-Eurasia convergence zone, and Turkmenistan’s capital, Ashgabat, sits right on one of its strands. Last year, an EwF team conducted field work in order to determine the fault’s slip rate by dating offset alluvial fans and river terraces. This year, another expedition set off to Turkmenistan with the aim to find out when the last major earthquake happened on this fault. Knowledge on the last major event would help us to better understand the rupture behaviour of this fault, and to get an idea on the hazard it poses to the people living next to it. The devastating Ashgabat Earthquake of 1948 probably did not rupture the main fault, but a secondary strand. However, there is abundance evidence for single-event surface rupture not very long ago, geologically speaking. James Jackson (Cambridge), Richard Walker (Oxford), Nick Dodds (Oxford), and Christoph Grützner (Jena) visited several sites that could help to solve this question. 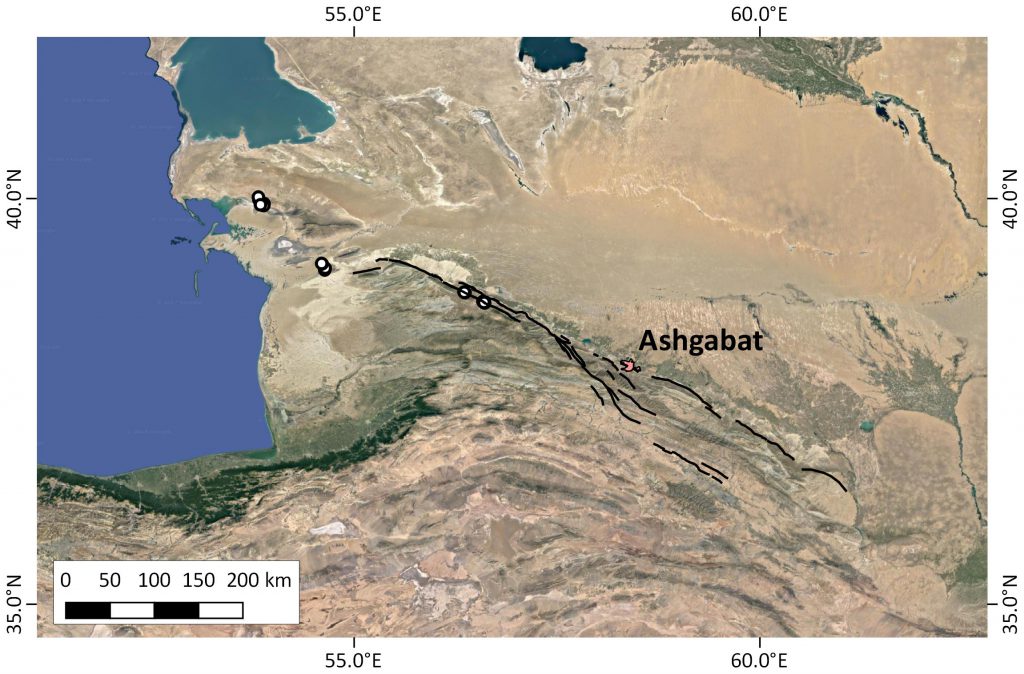 Map of the investigations in 2017.

We focussed on a site where the landscape has recorded a major pre-historic earthquake. The fault trace is marked by a change in slope (a so-called ‘scarp’) that was created when the earthquake offset the surface. We found fault offsets of approximately 5 metres horizontally and around 1-2 m vertically, which we interpret as the result of the last surface-rupturing earthquake. Sediment has ponded against the scarp where it is uphill-facing. This sediment would post-date the last earthquake and thus allow us to determine the timing of the last event. We excavated two shallow trenches across the fault scarp to sample the sediment. 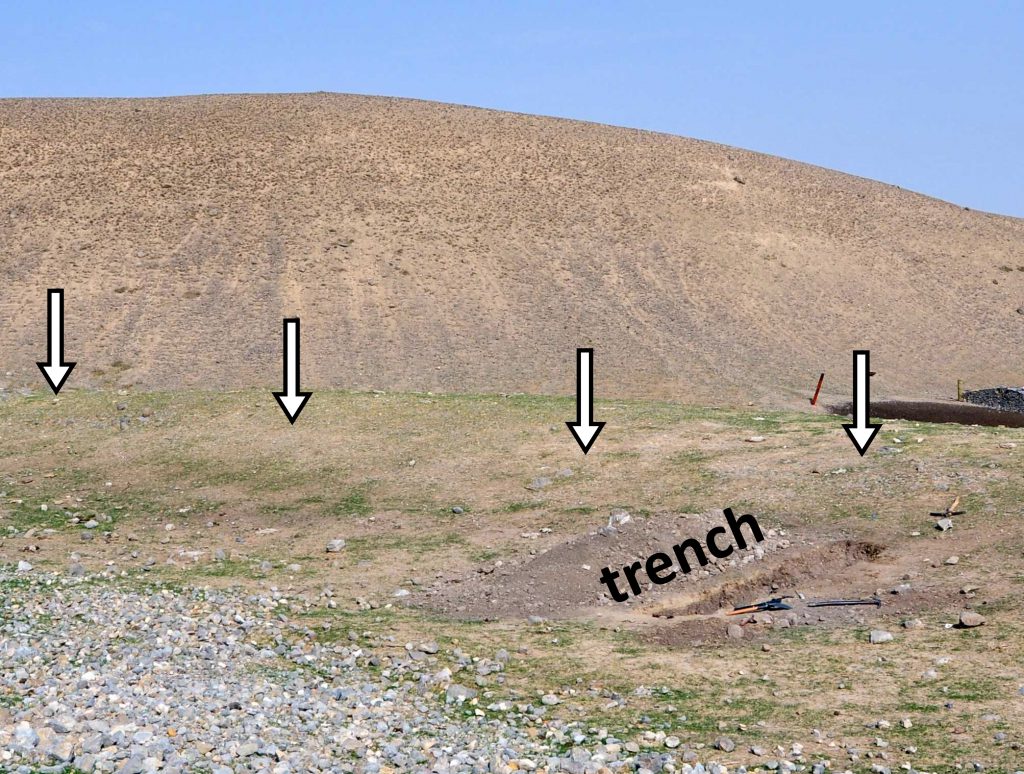 Trench 1 dug across the fault. The fault scarp is marked with arrows.

The fault scarp can be traced for several kilometres and is marked by the white arrows. 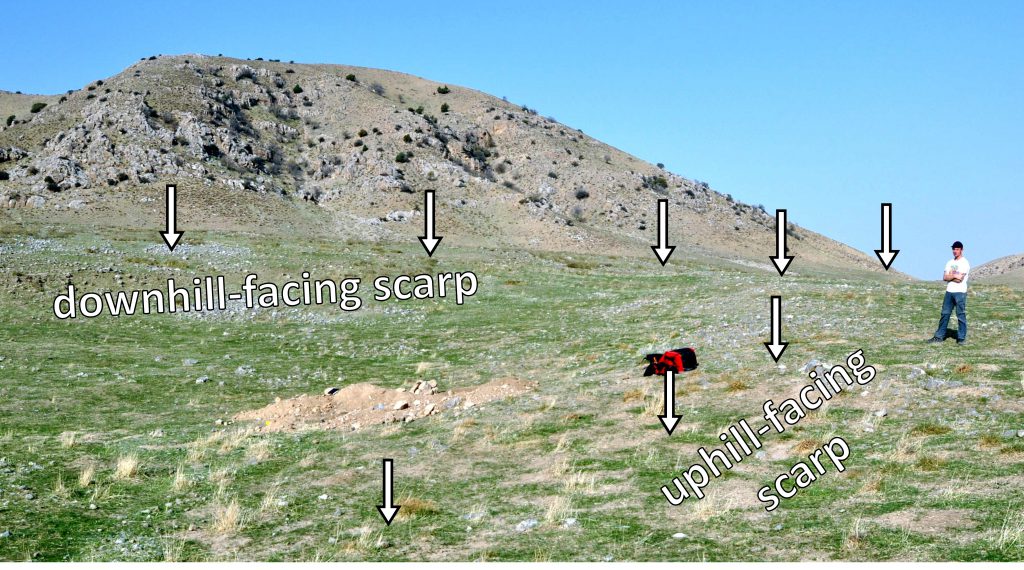 Trench 2 across the fault.

We encountered fine grained-sediment with pieces of charcoal. In addition, we collected one OSL sample for optically stimulated luminescence (OSL) dating of the sediments (Rhodes, 2015). This technique measures the burial age of the material. Due to the natural occurrence of very small amounts of radioactive elements in the silts and sands, defects in the lattices of quartz and feldspar grains accumulate as soon as the sediment is not exposed to sunlight anymore, i.e. after deposition. We sampled the material in light-proof steel tubes. In the lab the sample tubes will be opened in a darkroom and will be subjected to defined doses of light or infra-red radiation. This treatment triggers the defects in the crystal lattices to be reset, which goes along with the emission of light (luminescence). The intensity of the luminescence signal is proportional to the amount of time for which the sediment has not seen sunlight. Thereby we can determine the timing of deposition and, thus, get a post-date on the last major earthquake.

We collected a set of high-resolution photographs from the trench walls. Using Structure-from-Motion, a photogrammetry technique, we will build a precise photorealistic model of the trench (Reitman et al., 2015). This enables us to create a virtual outcrop for our studies. We sketched the trench in great detail and took notes on the nature of the sedimentary units.

In order to measure the offset we recorded a topographic profile across the scarp by means of a yardstick and a clinometer. We took a series of photographs from the surrounding hills to create an additional SfM-model of the entire valley with the trench in its centre.

We also visited the trace of the Main Kopeh Dagh Fault at the Purnua/Turtarak site. We mapped a ~1.5 km-long section of the fault, which is clearly expressed in the landscape. Right-lateral offsets in streams were found to be ~5 m at several sites, which may correspond to the last major earthquake. Vertical offsets manifest as breaks in slope along the fault trace. We observed a clear change in lithologies across the fault—river gravels are juxtaposed against fine-grained, wind-blown sediment known as ‘loess’. 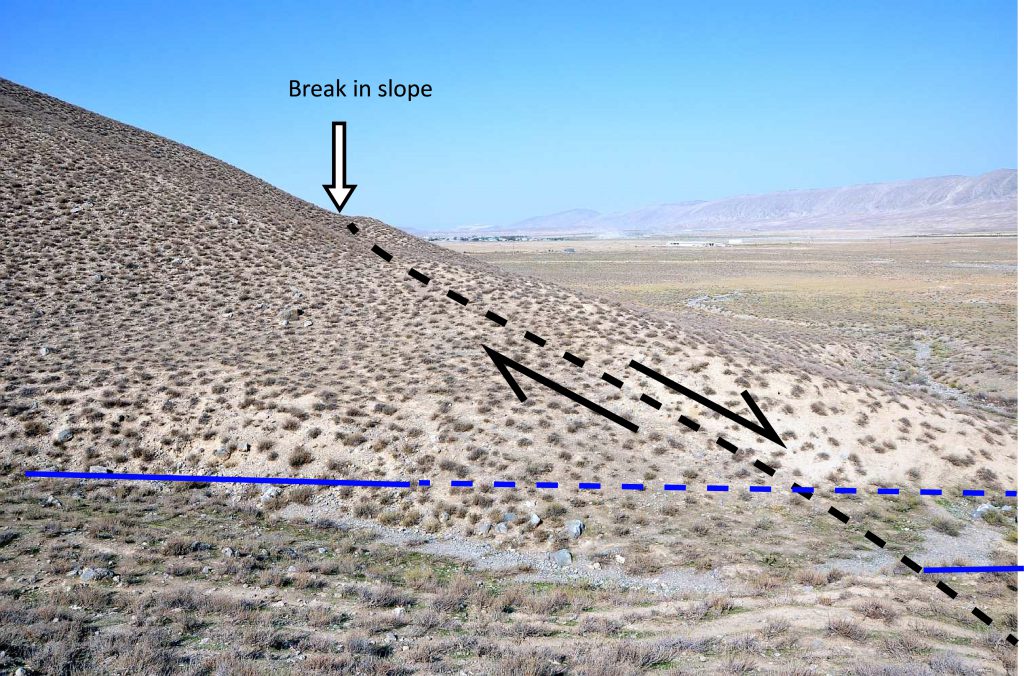 At the Purnua site, right-lateral offsets of around 5 m were found in small streams (blue line).

At another site we inspected two lineaments that we identified on satellite imagery before. From remote sensing data it was not clear whether these features were old shorelines from a relatively higher Caspian Sea level, or whether they are fault scarps. We found two ridges that we identified as sedimentary features, most likely old beach ridges, in outcrops. We sampled the shoreline in order to date them. The data will help us to determine if this region was subject to faulting after the formation of these shorelines. Thus, this work is an important contribution to understand the deformation of the crust between the Main Kopeh Dagh Fault in the southeast and the Apsheron sill in the Caspian Sea to the northwest. 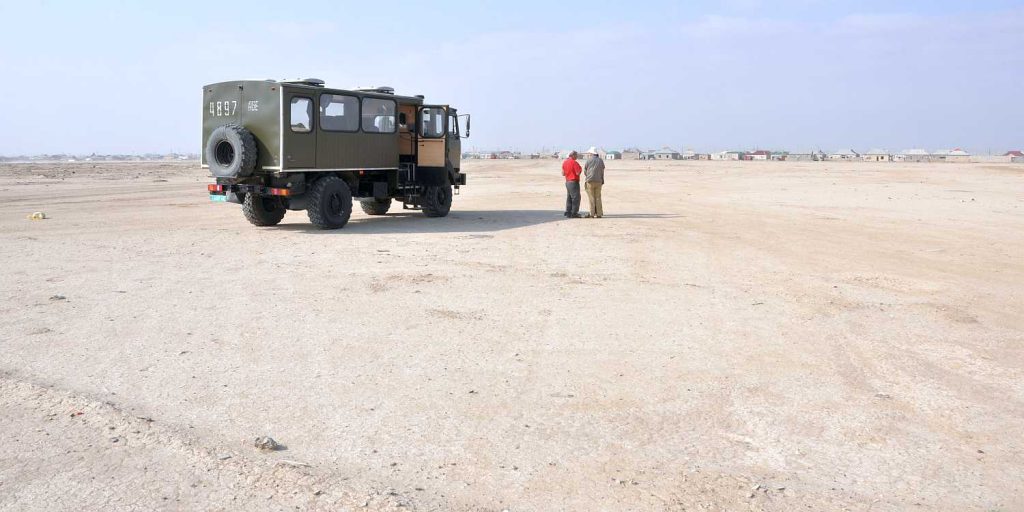 Location of the 2000 earthquake surface ruptures near Kum Dagh. 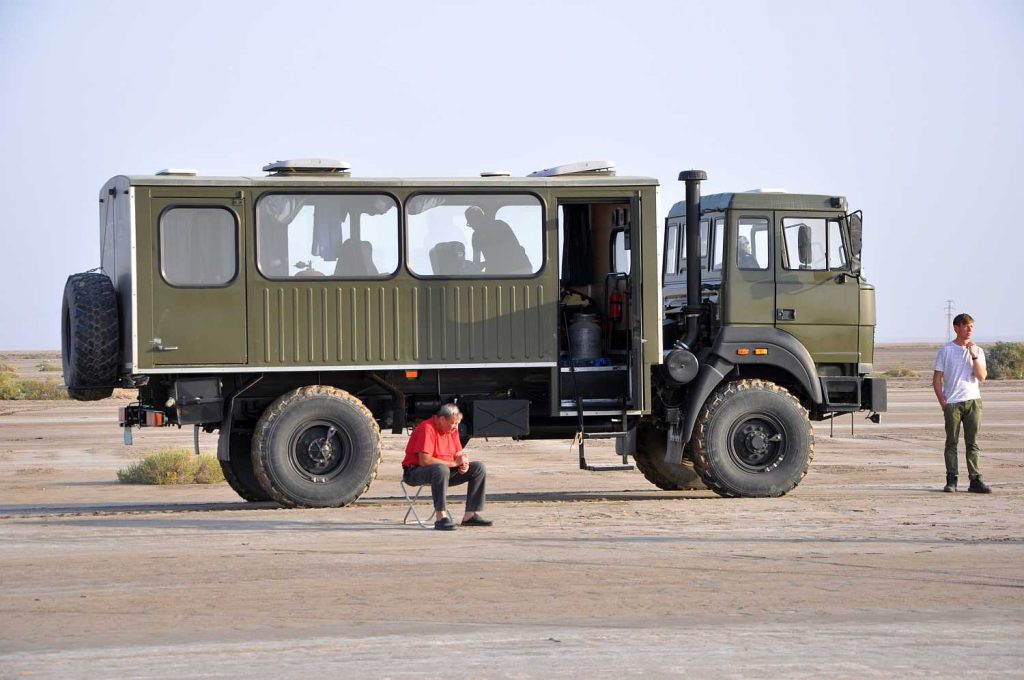 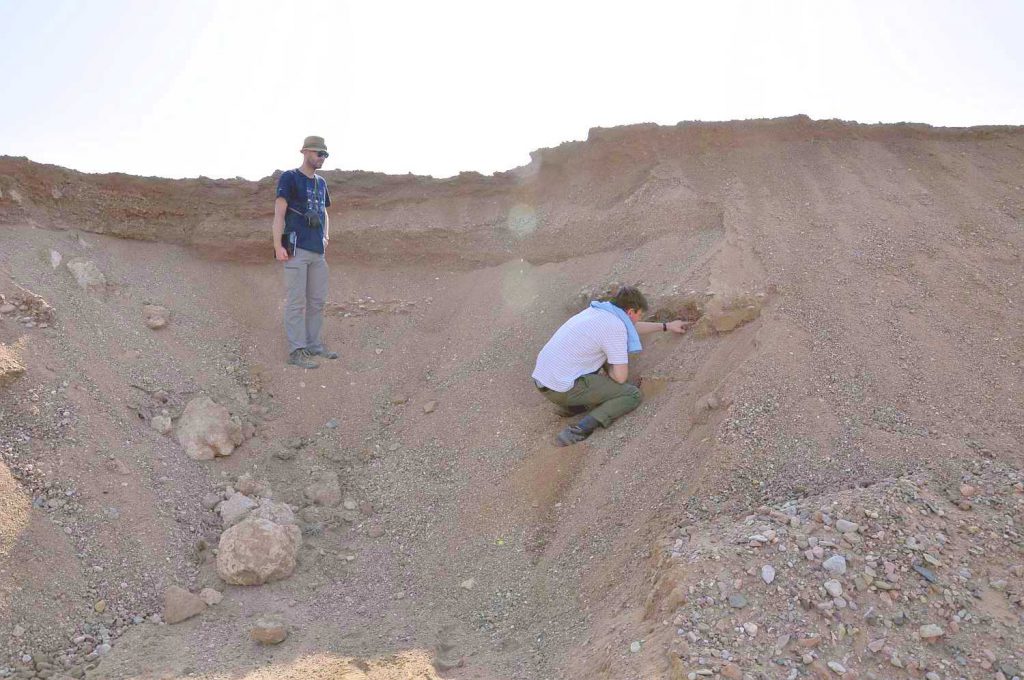 The Baya Dagh mud volcano near Kum Dagh was the aim of our investigations on 27 October. This interesting feature is situated in the eroded core of an anticline and exhibits both the reservoir rock and the cap rock of one of the main hydrocarbon fields in this area. The reservoir rock, consisting of well-sorted quartzitic sandstone, towers the surrounding clay layers. It was most likely extruded in a sandblow due to overpressured pore liquids, and parts of it lithified close to the surface. Erosion then removed the soft clay layers and created a spectacular dyke-like exposure. Our observations here allowed us to draw some conclusions on the stress state in the subsurface, completing the understanding of the regional tectonic setting and the formation of the hydrocarbon reservoirs. 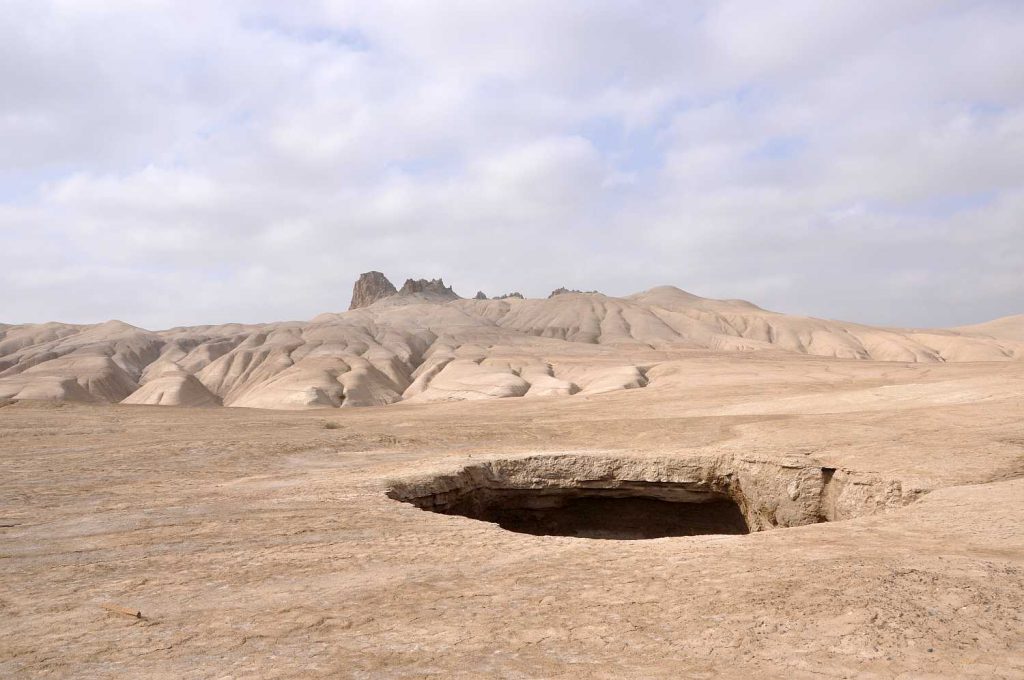 This crater on Baya Dagh mud volcano was active a few years ago according to our local guide. 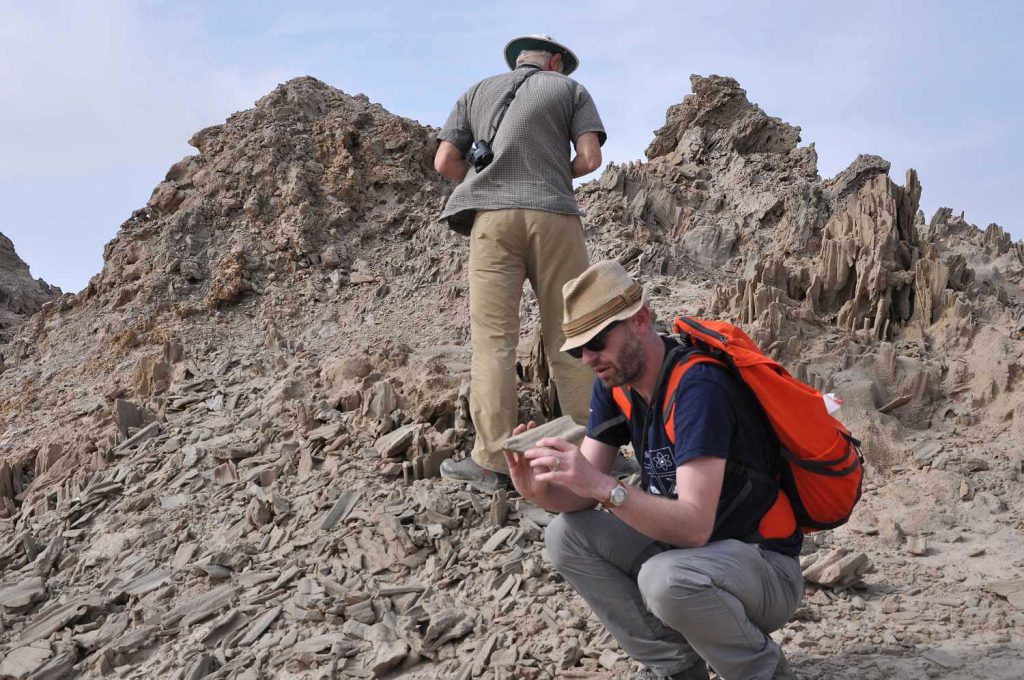 The final stop on 27 October was the city of Kum Dagh. An earthquake in the year 2000 had caused 22 km-long surface ruptures in this area, which are not well-documented in the English literature. Our field guide and Yevgeney Bezmenov reported their accounts of the surface ruptures and showed us the location of their occurrence and their strike. These observations shed light not only on the earthquake-related hazards, but also on the source parameters of this rather unusual seismic event.

We owe thanks to our colleagues from Turkmenistan, namely Geldy Begenjev (Head of Geophysical Laboratory), Yevgeney Bezmenov and Robert Mirzin (both Research Engineers, Geodynamics Laboratory) from the Academy of Sciences. Annaniyaz Golayev was the most careful and reliable driver who managed to reach even the most remote outcrops.