Iran:  Our longest-standing collaborative research relationships have been with colleagues in the Geological Survey of Iran, the Institute of Earthquake Engineering and Seismology, and the University of Zanjan.  We have carried out joint fieldwork and other projects for 20 years over most of the country, including post-earthquake investigations, regional and specific studies of active faulting, paleoseismology, earthquake seismology and regional geodynamics. 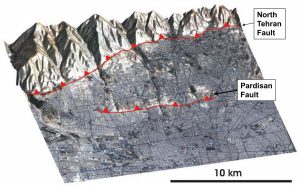 A recent highlight has been the characterization of a major active fault within Tehran itself (see Talebian et al 2016).  In 2014 EwF delegates  participated in a Symposium on Earthquake Geology, Seismology, Engineering and Tectonics, Tabriz, Iran (run jointly with Geologica Survey of Iran).  This was one of the first occasions when EwF used international partners to help local scientists in their dialogue with civic leaders and decision makers: a very constructive and positive experience, since repeated in Kathmandu, Jammu, Almaty and Bishkek.  Conclusions and final statements can be accessed here http://earthquake.conference.gsi.ir/en/contents/Closing-statements/Closing.statements.html

Turkey:  Work in Turkey has been concerned mostly with post-earthquake investigations, such as the 2011 Van earthquake (Elliot et al 2013), regional geodynamics involving GPS and seismology, and patterns of faulting (Howell et al 2017).

Greece:  Work in Greece has concentrated on origin of historic large tsunami earthquakes originating in the Hellenic subduction zone near Crete and Rhodes, and their threat to the eastern Mediterranean basin.  This work combines seismology, GPS, coastal geomorphology and Quaternary geology and tsunami modelling, and is in collaboration with Costas Synolakis of USC , Los Angeles and the Technical University, Crete. 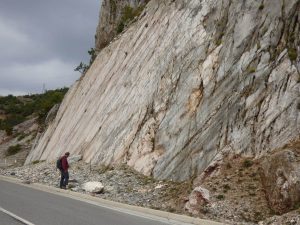 Albania: we are involved in collaborative research with colleagues from the Polytechnic University of Tirana and the INGV, Roma, Italy on combining seismology, GPS and field investigations of faulting to better understand the geodynamics and earthquake hazard in Albania.  Recently this collaboration extended into Kosovo and Macedonia, and will be integrated with our already relatively detailed knowledge of active deformation in Greece.