Tsunamis in the Eastern Mediterranean

It is probable that all the margins of the eastern Mediterranean are exposed to major, though largely uncharacterized, tsunami hazard [England et al., 2015]. For example, Ammianus Marcellinus, writing in the late 4th century, described an earthquake and tsunami on 21 July 365 CE that destroyed cities and drowned thousands of people in coastal regions from the Nile Delta to modern-day Dubrovnik.

. . and solid earth was shaken and trembled, the sea with its rolling waves was driven back and withdrew from the land …Hence, many ships were stranded as if on dry land, and since many men roamed without fear in the little that remained of the waters, to gather fish and similar things with their hands, the roaring sea, resenting this forced retreat, rose in its turn; and over the boiling shoals it dashed mightily upon islands and broad stretches of the mainland, ……. For the great mass of waters, returning when it was least expected, killed many thousands of men by drowning. 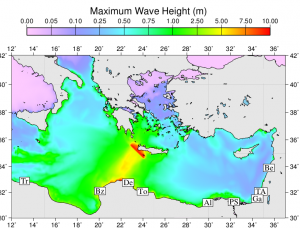 Hydrodynamic calculations of maximum wave heights in the Mediterranean basin following the 365 CE earthquake (from England et al., 2015). Colours display the maximum height of the sea surface in the 4 hours following the earthquake. The heights of the waves increase greatly in shallow water at the coasts. The locations of modern cities are denoted by two-letter abbreviations: Tripoli; Benghazi; Derna; Tobruk; Alexandria; Port Said; Gaza; Tel Aviv; Beirut.

Other tsunamis are known from historical records: Alexandria was devastated by another tsunami in 1303, and an earthquake off the shore of Lebanon generated a tsunami in 551. Events like these would, if repeated in today’s world, have devastating effects. We have been using a combination of geological, seismological, and geodetic observations to try to determine the locations of underwater faults that may lead to future tsunamis in the region.

These observations are beginning to suggest that the tsunami hazard in the Eastern Mediterranean does not follow the usual pattern. Recent major earthquakes that caused tsunamis, such as those in Sumatra (2004) and Japan (2011) took place on the major thrust faults that mark the boundaries between plates. In contrast, the Magnitude 8.3 earthquake that caused the tsunami of 365 CE took place off the coast of western Crete on a fault that is within the Aegean crust and is separate from the plate boundary [Shaw et al., 2008]. 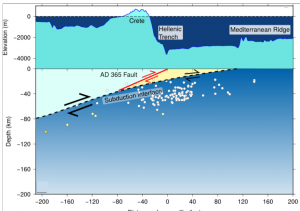 Sketch of the configuration of faulting in the Hellenic plate boundary at the location of the 365 CE earthquake (from England et al., 2015). The lithosphere of the south Aegean and its underlying upper mantle are shown in light blue; Nubian lithosphere and its upper mantle are shown in darker blue. Topography is shown at an exaggerated scale. Yellow shading represents the thick sedimentary pile on top of the Mediterranean sea floor. The subduction interface is shown by the dashed line separating the Nubian plate from the overlying sediment and the Aegean lithosphere. The 365 CE earthquake took place on the fault that is shown in red.