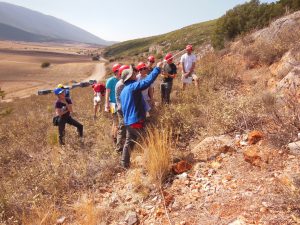 Our geological fieldwork in China has focused on the Ordos region of Shaanxi, Shanxi, Gansu, and Ningxia. This has been a collaboration between the China Earthquake Administration, the Shaanxi Seismological Bureau, and the Universities of Cambridge and Oxford.

In particular, we have concentrated on identifying the faults that are likely to have been responsible for earthquakes that caused major destruction cities in the historical past. These include the 1556 Huaxian earthquake, which killed an estimated 830,000 people, and whose epicentre was close to the city of Xi’an (present population 8 million).  Other destructive events include the 1739 earthquake at Yinchuan in Ningxia, and the 1920 Haiyuan earthquake in Gansu.

We have mapped the sources of these earthquakes, and produced estimates of their magnitudes and locations through an analysis of their surface ruptures that are preserved in the landscape, and which can be mapped remotely using high-resolution digital topographic models derived from satellite imagery. To aid assessments of earthquake hazard at a regional scale we have also undertaken studies of the slip-rate of the major active structures, many of which have no historic record of earthquakes but which constitute important sources of hazard, and performed regional analyses of the accumulation of strain. 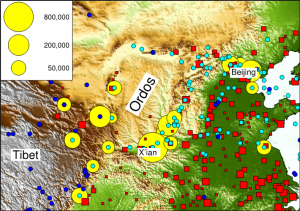 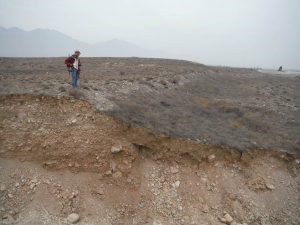 Dr. Zhikun Ren of the CEA standing on the fault ruptures of the 1739 Yinchuan earthquake. A recent road-cut exposes a cross-section through the rupture. Photo: Richard Walker [See: Middleton, T. A. and Walker, R. T. and Parsons, B. and Lei, Q. and Zhou, Y. and Ren, Z. (2016) A major, intraplate, normal-faulting earthquake: The 1739 Yinchuan event in northern China. Journal of Geophysical Research: Solid Earth, DOI: 10.1002/2015JB012355]

This work focuses on the two fundamental gaps in earthquake-risk reduction in China: (i) that between scientific understanding of the risks and hazards, and the knowledge that communities need in order to design effective practices of governance; (ii) the gap between the top-down and bottom-up approaches to the governance of earthquake disaster risk reduction (EDRR). Our work is rooted in the two-thousand-year historical record of earthquakes in the region, which allows us to investigate a suite of methods for bridging these gaps. In this work, we have been collaborating closely with researchers, policymakers and operational agencies at local, provincial, and national level, working to integrate local (bottom-up) and national (top-down) approaches to EDRR.

China has a wealth of existing knowledge and practical experience in reducing earthquake disaster risk at the community level, but this information is held in a disseminated fashion, with different stakeholders often being unaware of useful information and practices known to others. With our partners, we therefore organised a writeshop in Xi’an on 17-19th April, 2015 to bring together the voices of different groups working on earthquake risk – with a focus on rural communities in Shaanxi Province.

The English version of the publication is accessible here. As a result of this writeshop, a demonstration EDRR project has been developed in Cheng Huo township, Sha’anxi. This intervention was carried out in the early summer of 2017 in conjunction with Gender Development Solution, a national NGO, involving training of the local community in EDRR and sharing best practice across the whole of Long County.

Hong Kong Polytechnic University, Gender Development Solution, the Sha’axi Emergency Management Office, Northwest University are now, in collaboration with UNISDR and funded by the ONE Foundation, expanding this work across a wide region of Shaa’anxi province.

A seismic Scenario for Weinan City

The 1556 Huaxian (Magnitude close to 8) earthquake occurred close to Xi’an, the ancient capital of China, and was responsible for the deaths of over 800,000 people. Xi’an now has a population of around 10 million, and the Weihe Basin, in which Xi’an is situated, contains several other large cities  (figure below). While the probability is relatively low that an earthquake as large as that of 1556 will repeat in the near future, the historical records show that many smaller earthquakes have occurred in the Weihe Basin the past.

We are joining the Earthquake Administrations of China, of Sha’anxi Province, and of Weinan City, along with Sha’anxi Gender Development Solutions, and Geohazards International, a scenario based on a known historical earthquake – the 1568 magnitude 6 ¾ Xi’an earthquake, which was perhaps an aftershock of the 1556 earthquake. The purpose of this scenario is to calculate the consequences, for the city of Weinan and its surrounding rural communities, if the 1568 earthquake were to recur. These calculations will then be fed into future policies about earthquake risk reduction in the region.

The outcomes of the scenario study, completed under the follow-on NERC programme Increasing Resilience to Natural Hazards in China  (IRNHiC), include narratives as a story line for the public (here), with accompanying and supporting factual and technical material for government and public-safety professionals (here), and an overall project report (here).