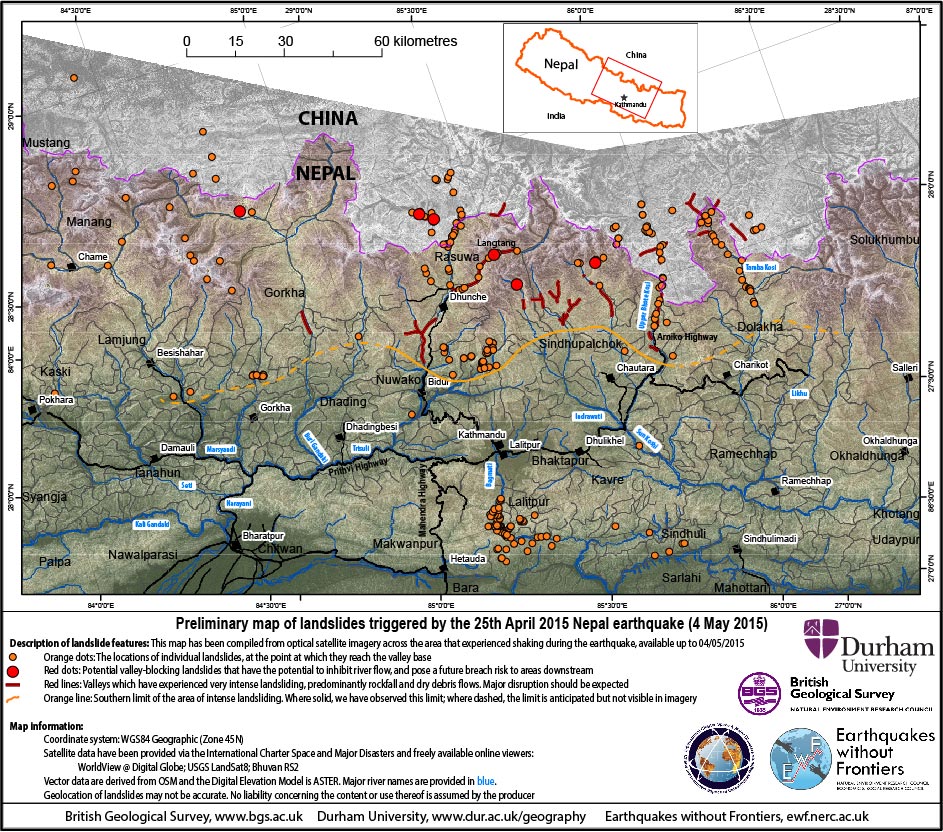 Please note: High and low-resolution versions of this map in both colour and black & white can be downloaded as PDF files from: ftp:\\topdog.dur.ac.uk\njr\nepal_eq

We were working to three objectives: identification of large landslides (1) blocking valleys and potentially causing significant secondary hazards; (2) affecting villages; and (3) disrupting infrastructure, such as roads. The team has undertaken a thorough investigation of available satellite imagery from multiple sources. The imagery has been investigated at 1:5,000 to 1:10,000 scales (with smallest features that can be distinguished ranging from about 5 to 15 m). Image resolution ranged from 2 m to more than 22 m. The team has obtained access to satellite imagery covering c.55,000 km2 with approximately 25% cloud-free. Analysis of imagery from the high Himalayas by the Charter Project Manager’s institution (NRSC-ISRO) has also been evaluated by the UK team.

We summarise some preliminary conclusions:

The Arniko Highway (north to Tibet) is reported to be blocked from near Larcha to the Tibetan border by numerous rockfalls. This area has had chronic landslide problems prior to the earthquake, and the road is regularly impassable during the monsoon.

The Prithvi Highway (the main route from Kathmandu south to India) has also experienced ongoing landslide problems since the earthquake, including large rockfalls onto the road. This road has suffered extensive landsliding in the past. In August 2000 a single landslide blocked the road for 11 days, leading to severe shortage of fuel and other commodities in the metropolitan area.

Note that the 2014 Sun Koshi landslide which cuts the Arniko Highway just upstream of the Bhote Kosi Hydropower plant, and the rock dam that it created, appear to be intact. The river and lake levels do not appear to have changed during the earthquake.

High and low-resolution versions of the above map in both colour and black & white can be downloaded as PDF files from: ftp:\\topdog.dur.ac.uk\njr\nepal_eq