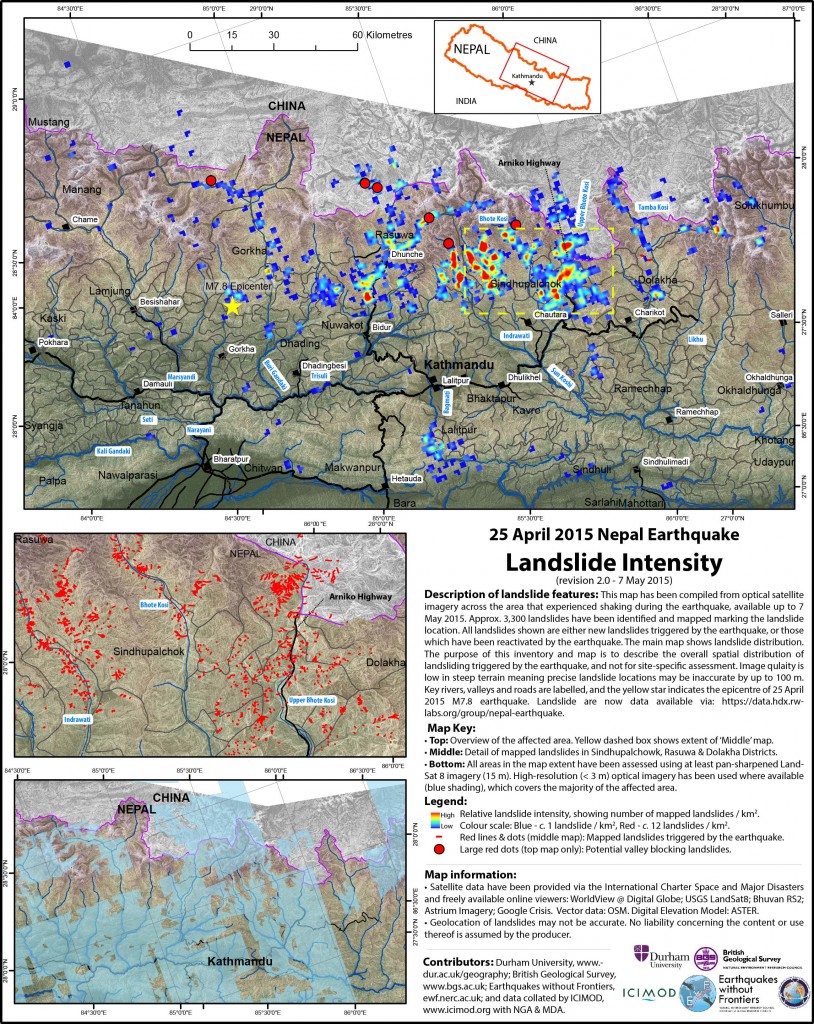 Please note: A higher-resolution version of the map, and black-and-white versions, are available from: ftp://topdog.dur.ac.uk/njr/nepal_eq/UPDATE_20150508/

The UK mapping team has worked to three objectives that were defined by the UK Department for International Development: identification of large landslides (1) blocking valleys and potentially causing significant secondary hazards; (2) affecting villages, and (3) disrupting other infrastructure, such as roads. The team has undertaken a thorough investigation of available satellite imagery from multiple sources.

Landslide observations have been interpreted from satellite imagery by highly-experienced geoscientists. If additional data have been included (e.g. Tomnod crowd-sourced information on damage) they have been clearly identified on the database and on the maps.

The satellite imagery has been sourced from the International Charter Space and Major Disasters as well as directly from data providers. Pre- and post-earthquake imagery was used to ascertain that landslides were active post-earthquake; i.e. either there was no landslide present on the landscape pre-earthquake or the pre-existing landslide had moved visibly on the imagery since the earthquake.

The coverage, detail and quality of the landslide inventory are primarily determined by the available imagery. The main challenge has been to obtain cloud-free optical imagery and activities are still ongoing to source these data. The imagery has been investigated at 1:5,000 to 1:10,000 scales (with smallest features that can be distinguished ranging from about 5 to 15 m). The image spatial resolution ranged from 2 m to more than 22 m – some images were greyscale (panchromatic) while others were colour (multispectral). At 22 m resolution it is only possible to distinguish major events (larger than ~100 m on the ground) and the detail is not available to ascertain if they are solely associated with the earthquake or are part of the natural landscape processes in the area.

The team has obtained access to satellite imagery covering c.55,000 square kilometres with approximately 25% cloud-free (figure 1). Analysis of imagery from the high Himalayas by the Charter Project Manager’s institution (NRSC-ISRO) has also been evaluated by the UK team.

The imagery was loaded into a Geographic Information System (GIS) and points / lines /polygons digitised on screen, directly onto the imagery. In some cases it was not possible to obtain the satellite imagery but they could be viewed on the supplier’s web portal, in which case the landslide information was traced out on the portal and transferred by eye to the GIS. Maximum uncertainties on landslide locations are ~100 m, but vary across the area depending on the type of imagery used. 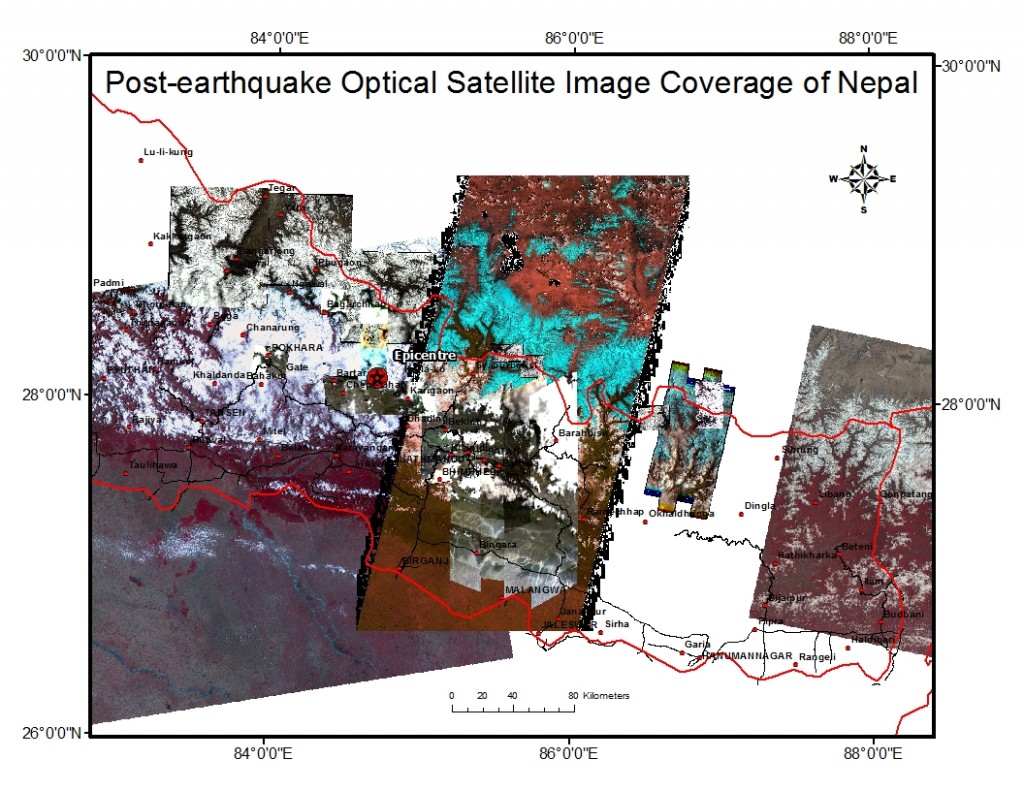 Figure 1. Post-earthquake optical satellite imagery of Nepal (current to: 7 May 2015)

We summarise some preliminary conclusions:

The Arniko Highway (north to Tibet) is reported to be blocked from near Chaku to the Tibetan border by numerous rockfalls. This area has had chronic landslide problems prior to the earthquake, and the road is regularly impassable during the monsoon. The pre-existing Sun Koshi landslide dam that crossed the Arniko Highway at Jure appears intact.

The Prithvi Highway (the main route from Kathmandu south to India) has also experienced ongoing landslide problems since the earthquake, including large rockfalls onto the road. This road has suffered extensive landsliding in the past. In August 2000 a single landslide blocked the road for 11 days, leading to severe shortage of fuel and other commodities in the metropolitan area.

Note that the 2014 Sun Koshi landslide which cuts the Arniko Highway just upstream of the Bhote Kosi Hydropower plant, and the rock dam that it created, appear to be intact. The river and lake levels do not appear to have changed during the earthquake.

Valleys north of Melanchi, feeding into the Indrawati:

Dhunche north to the China border in Rasuwa District: