New paper on earthquake science in DRR policy and practice

Background: one of our priorities in the Earthquakes without Frontiers project has been to understand how earthquake science is used in disaster risk reduction (DRR) efforts across the partnership countries. To what extent are DRR activities informed by, or underpinned by, scientific knowledge of earthquake hazard? What parts of that existing hazard knowledge are being used, by whom, and in what ways? What parts are not being used, and why have they not been taken up? What new scientific knowledge would be most useful, and are there applications or end users for that knowledge that are already identified?

To begin to address these questions in Nepal, one of our case-study countries, members of the EwF team convened a series of focus groups in Kathmandu in early 2014. The groups included Nepali Earth scientists, as primary creators of earthquake hazard knowledge, as well as representatives of the major primary users of that knowledge: NGOs, major donor organisations, UN agencies, and engineers. The outcomes of this study have now been published as a working paper by the Overseas Development Institute. Below, we reproduce the executive summary of the working paper. The full text is available at https://www.odi.org/publications/10450-earthquake-science-drr-policy-and-practice-nepal. 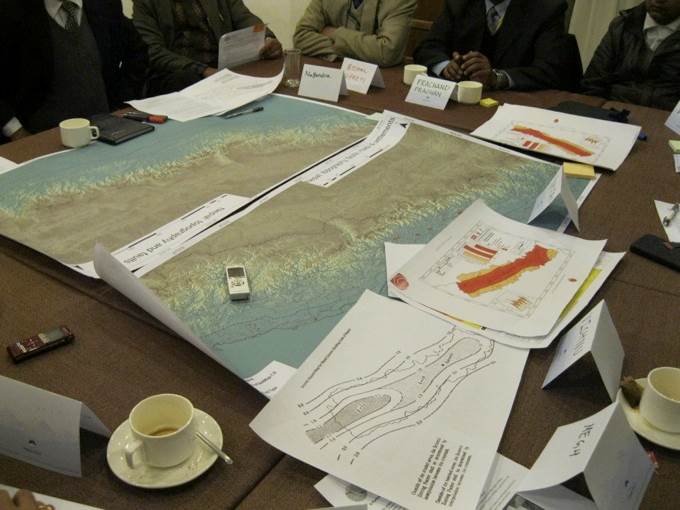 Earthquake science in DRR policy and practice in Nepal

This working paper summarises current and potential uses of earthquake science in disaster risk reduction (DRR) and resilience-building activities in Nepal. It is written for anyone with an interest in earthquake DRR in Nepal, in particular scientists who generate earthquake science and practitioners and policymakers who could use it. The study has been undertaken as part of the Earthquakes without Frontiers (EwF) project, funded by the UK Natural Environment Research Council and the Economic and Social Research Council. The project aims to support governments, non-governmental organisations and communities to build resilience to earthquakes and secondary hazards along the Alpine-Himalayan belt. It is focused on four case study countries: Nepal, the neighbouring Indian state of Bihar, Kazakhstan and China.

Nepal is a geologically active country with a long history of destructive earthquakes – most recently in the 2015 Gorkha earthquake sequence. There have been substantial advances in the scientific understanding of earthquake hazard in Nepal, but it is not clear how that understanding has informed, or could inform, national and international investment in earthquake DRR activities, and to what effect. The aim of this paper is to understand the role that earthquake science plays in DRR policy and practice in Nepal by seeking answers to the following questions:

In January 2014, we conducted a set of interviews and focus group discussions with local scientists, engineers, urban planners and representatives of major donor and practitioner organisations that are involved in DRR activities in Nepal. We found that earthquake science is widely used by those responsible for DRR in Nepal. Much of this science, however, is very general, and for most users it is used to inform broad opinions or choices rather than specific plans. This under-utilisation happens in part because potential science users don’t know what science can say (and therefore what questions to ask), and because scientists don’t know what those potential users need. Many of the questions that are directly addressed by earthquake science are far removed from the questions of those involved in DRR. Where earthquake science does provide knowledge of direct relevance to DRR, the wider context around the DRR activity has at least as much influence on what can be done as the science itself.

We found that there is appreciable earthquake science capacity in Nepal, with expertise on both primary and secondary earthquake hazards. Local scientists are often less connected to DRR organisations (e.g. donors and NGOs) than are international scientists, leading to frustration and disengagement with the DRR process.

We argue that science could be used both more often and more instrumentally within resilience work to guide and advance disaster preparedness and management, and to support DRR policy priorities and activities. These potential uses can be distinguished in terms of the primary end users:

We recommend the creation of a sustainable, government-led science advisory group, composed of national and international earthquake scientists, which could be called upon by potential users from the DRR community for advice at every stage of the disaster cycle in Nepal. This group could help to condense and assess available scientific information on earthquake hazards.

To ensure that end users can draw on expertise from this group, and from earthquake science more generally, we recommend that the model of the Nepal Risk Reduction Consortium – an existing partnership between the Government of Nepal and the humanitarian and development community, tasked with coordinating DRR activities in the country – be developed and extended as a way of ensuring explicit cooperation between government, donors and NGOs. This model provides a potential gateway for science to enter into DRR activities because it connects the relevant users and provides clear focus areas for engagement around a particular aspect of DRR, acting both as a conduit and as a point of contact for science and scientists.

We also recommend that scenarios be used more widely for contingency and logistics planning, as a specific mechanism for allowing earthquake science to be taken up and utilised by a range of end users. These scenarios can allow exploration of different possibilities – for example, the effects of earthquake occurrence during day-time or night-time hours on casualties, or the impacts of structural retrofitting efforts that are focused on particular districts or particular building types.  They also have the potential to identify possible impacts that are currently not considered, such as the effects of earthquake-triggered landslides, or earthquake impacts in rural districts as well as urban areas. The scenarios would be most effective if they were consensus products from a science advisory group (as recommended above), including government representatives, that could provide a collective and authoritative voice, backed up by peer-reviewed earthquake science.