In June 2015 an EwF team of UK and Kyrgyz scientists went to Kyrgyzstan to conduct field work in the Suusamyr valley. An earthquake of magnitude MS7.3 happened there in 1992, leaving more than 70 people dead. Several aftershocks exceeded magnitude 6. This thrust earthquake is interesting because it produced intense and widespread secondary earthquake environmental effects (landslides, rockfalls, secondary ruptures, mud eruptions, etc.), but remarkably short primary surface ruptures only. Little is known about the causative fault and other active faults in the area, which is why we decided to have a closer look.

In 1992, ruptures of several metres height occurred near the Suusamyr river, but were limited to few hundreds of metres in length. Some 25 km to the west, another set of surface ruptures appeared, which were only about 1 m in height and less than 3 km long. 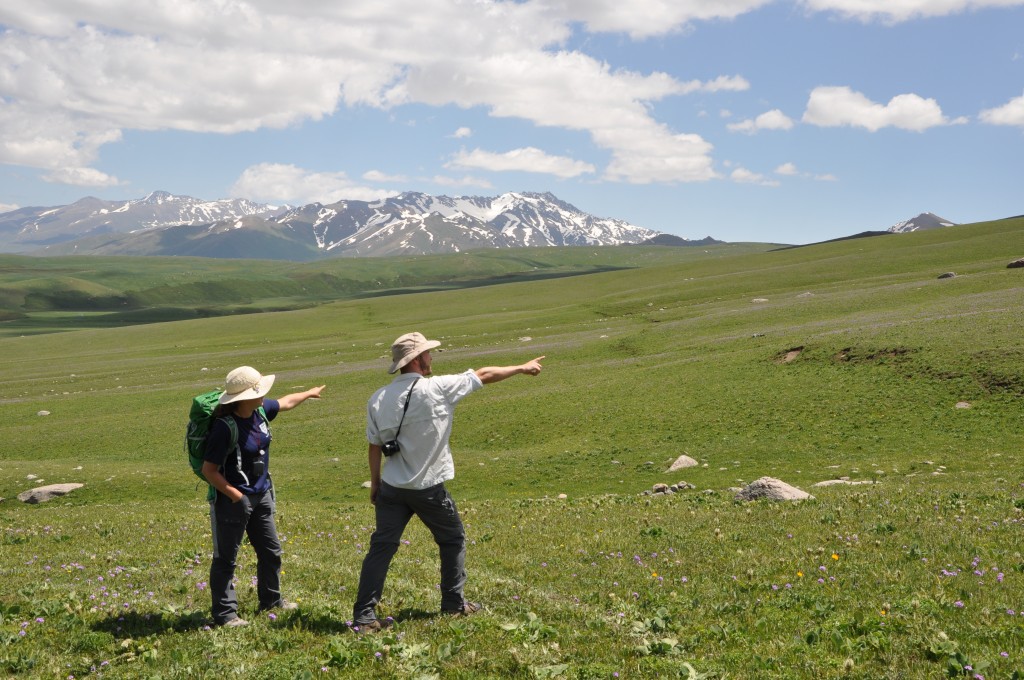 The surface ruptures of the 1992 Suusamyr Earthquake, western section. 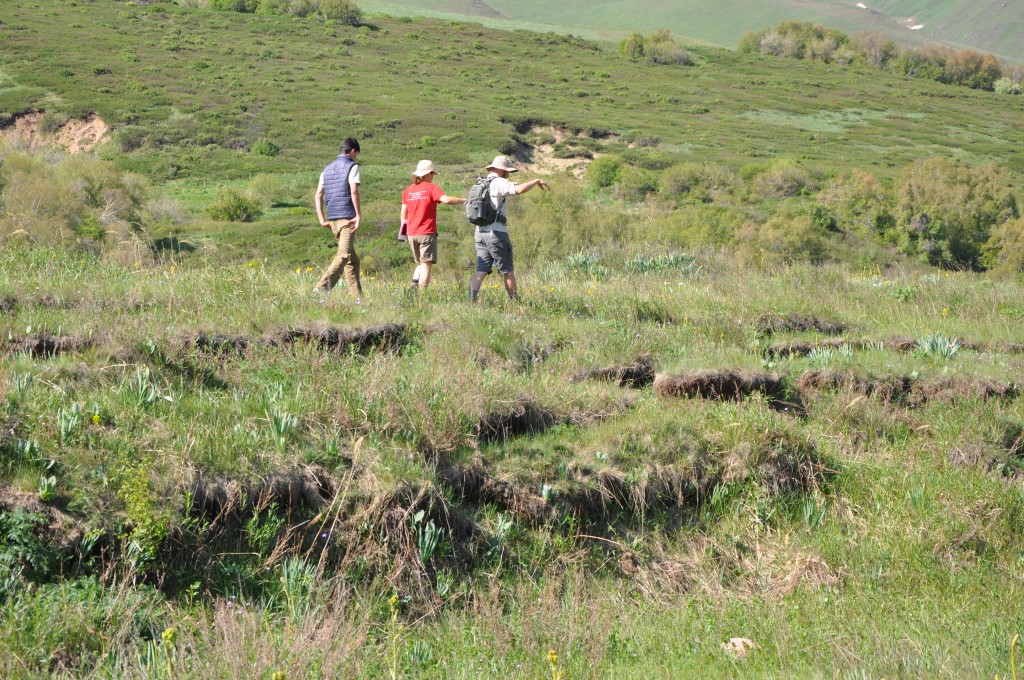 The surface ruptures of the 1992 Suusamyr Earthquake, eastern section.

In order to better understand the distribution and mechanism of surface faulting we produced high-resolution digital elevation models (DEMs). We used SPOT stereo imagery to create a DEM of the entire valley and analysed other satellite data that were available, e.g. de-classified CORONA imagery. In the field we mapped the surface ruptures and measured the offsets with differential GPS. Using a drone we collected thousands of aerial photos which will be used to compute a DEM with the structure-from-motion technique. 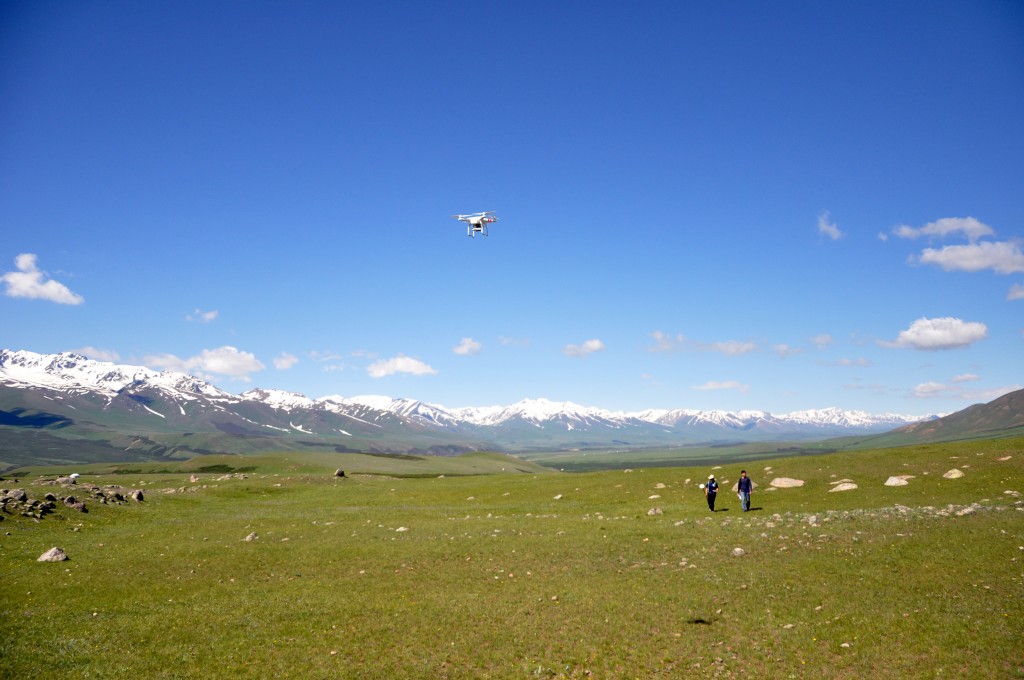 Capturing aerial images with our drone.

We also visited the sites where landslides and other secondary earthquake effects were observed in 1992. The landslides were mainly responsible for the death toll in this sparsely populated area and they completely destroyed the main highway between Osh and Bishkek. Secondary ruptures in a graben-like geometry were found on a nearby ridge.

Huge landslides happened during the 1992 earthquake. 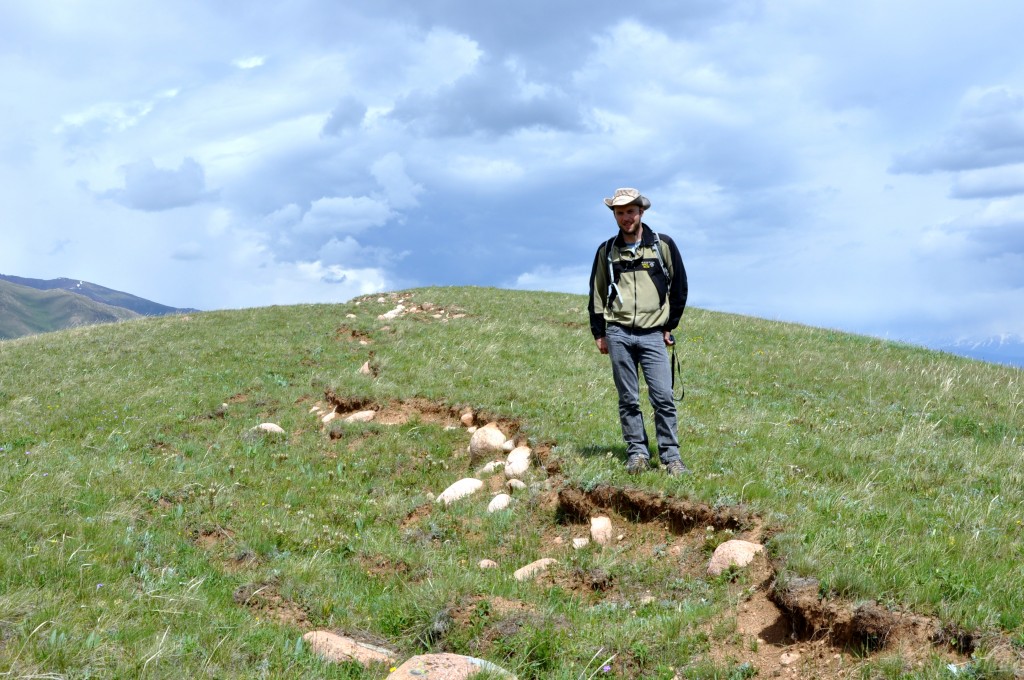 As we knew that the surface ruptures in 1992 were fairly short, we wondered if past earthquakes had caused different effects. We started looking for the traces of previous large earthquakes in the landscape and we found fantastic examples of deformed river terraces and growing anticlines. The terraces were surveyed with DGPS and with our drone and we dug sample pits to determine the age of the abandoned surfaces.

An alluvial fan in the Suusamyr valley. 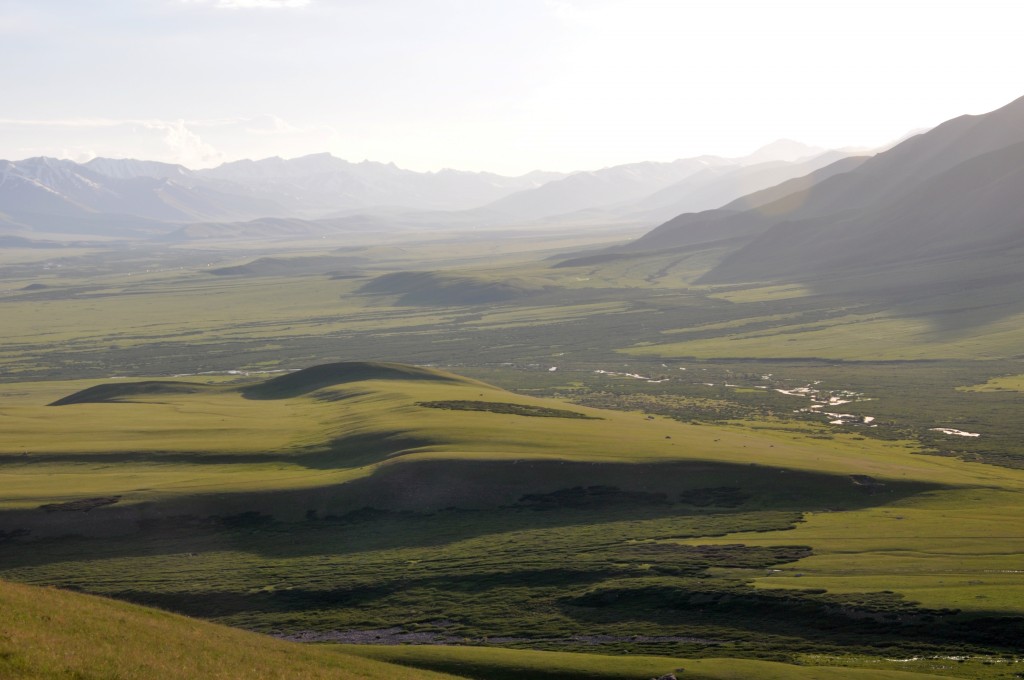 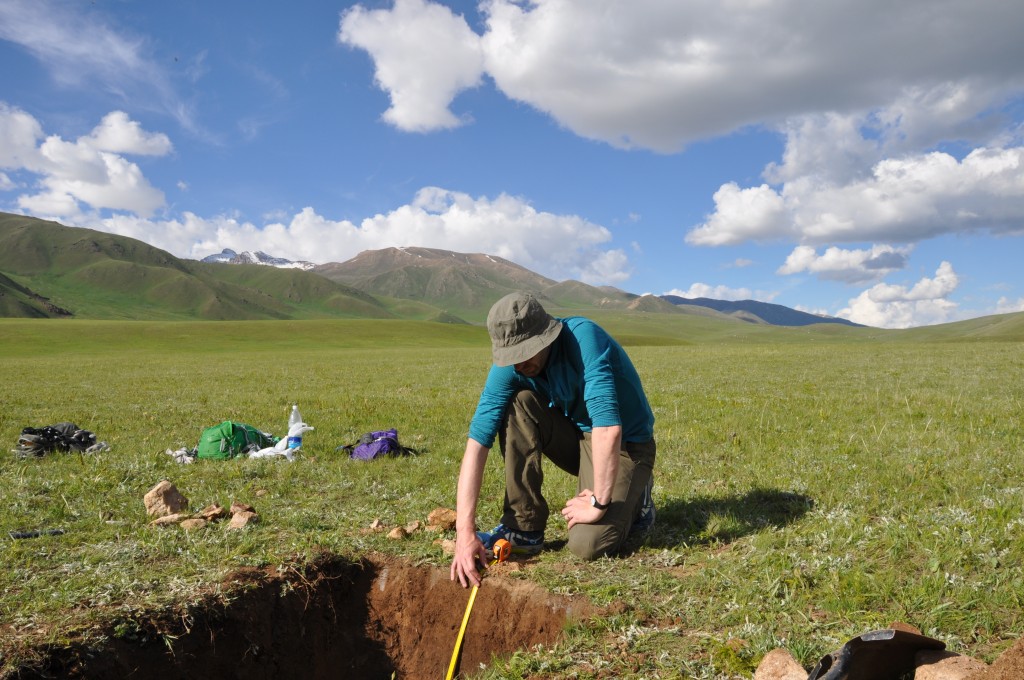 Yet even better, there was a fault a scarp that looked rather young, geologically speaking. We excavated a trench by hand across it to see if the sediments would tell us something about the earthquake that ruptured the surface here. Not only did we encounter a beautiful thrust fault and warped and faulted sediment layers, but we also found material suitable for dating – charcoal and fine grained sediments for OSL analysis. 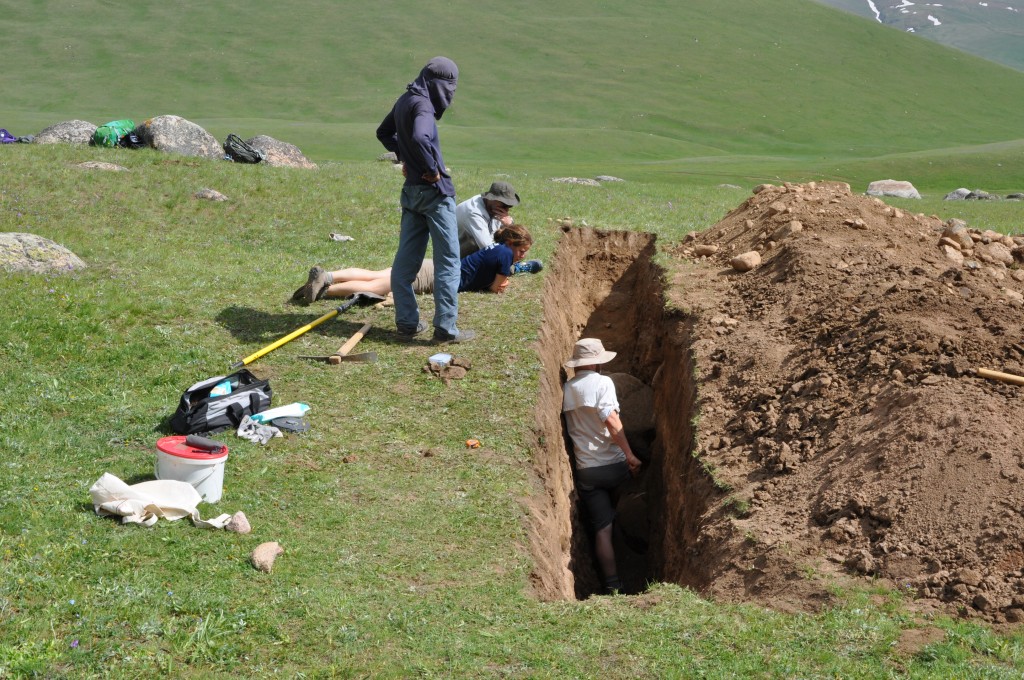 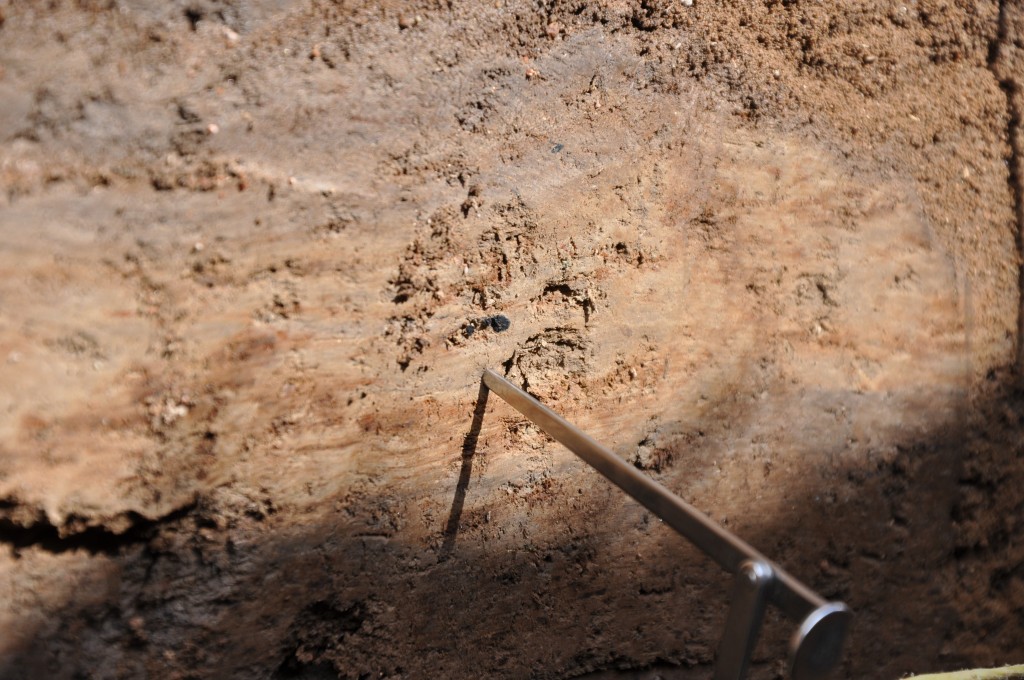 …and encountered charcoal which allowed us to date the deformed layers. 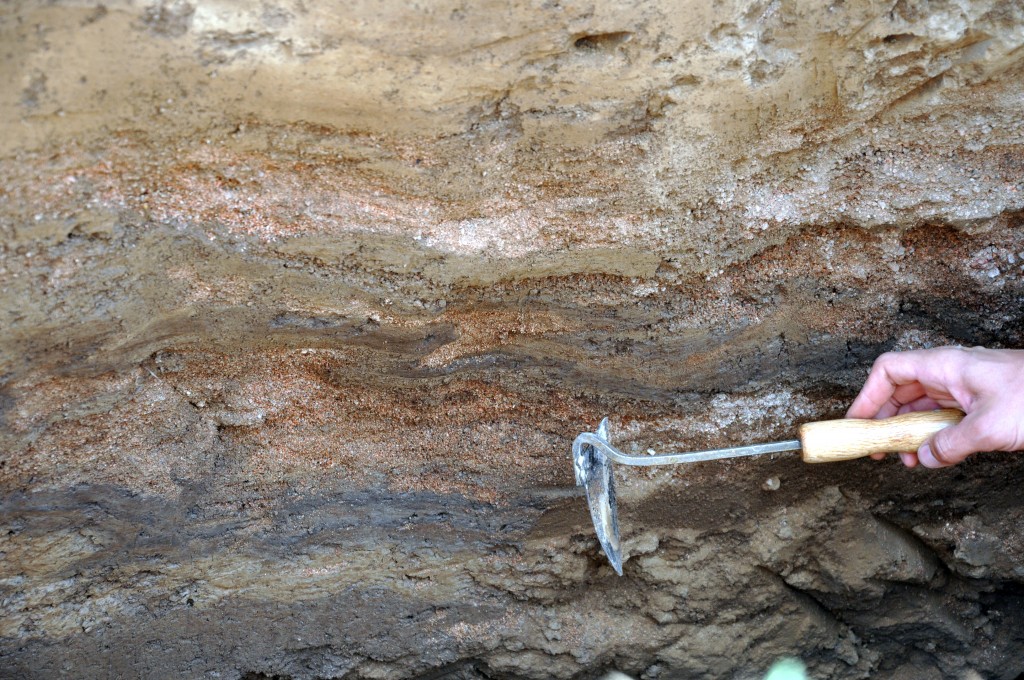 Deformed sediment layers in the trench, folded and faulted by a paleoearthquake.

Most of the data that we collected will be processed by Eleanore Ainscoe for her PhD thesis. Apart from this, Austin Elliott is interested in the styles of surface faulting, Christoph Grützner wants to find out more about the paleoseismology data and the secondary earthquake effects, and Richard Walker is keen on working with the DEMs.

A big thank you goes to Kanatbek Abdrakhmatov for organising the field work, to our field crew, the great drivers and our cook!