Three members of the EwF team represented the project at a recent workshop in Chengdu, China, hosted by NERC, ESRC, and the National Natural Science Foundation of China (NSFC). The workshop brought together about 50 researchers from the UK and China, and was aimed at scoping out a possible joint UK-China research programme on geohazards, with a particular focus on earthquakes in China. Lena Dominelli, Barry Parsons, and Alex Densmore presented different aspects of EwF, and put special emphasis on three specific developments: the close links that we are developing with the China Earthquake Administration, Hong Kong Polytechnic University, Gender Development Solutions (GDS), and World Vision; the advances that can be made by getting physical and social scientists together with stakeholders early in the research process; and the importance of viewing both hazard and vulnerability as changing in time, both before and after a large earthquake. It’s clear that the lessons learned so far in EwF, and in the Increasing Resilience to Natural Hazards programme more generally, are being learned from. Our sincere thanks to all the staff at RCUK-China, NERC, ESRC, and NSFC who worked so hard to make the workshop so successful – particularly Lesley Aspinall and Chris Franklin from NERC, Yao Yupeng from NSFC, and Eloise Mellor and Alexa Mills from the ESRC.

After the workshop, we spent a sobering day among the ruins of Beichuan, a small town in the Longmen Shan west of Chengdu that was devastated in the 2008 Wenchuan earthquake. A museum just outside the town preserves a view of the event and some of the stories of those who were caught up in it, while the town itself has been set aside as a memorial for the 8,000 residents who lost their lives. Prof Zhang Peizhen of the China Earthquake Administration was in Beichuan days after the earthquake and gave a valuable perspective on both the human and physical sides of the event. 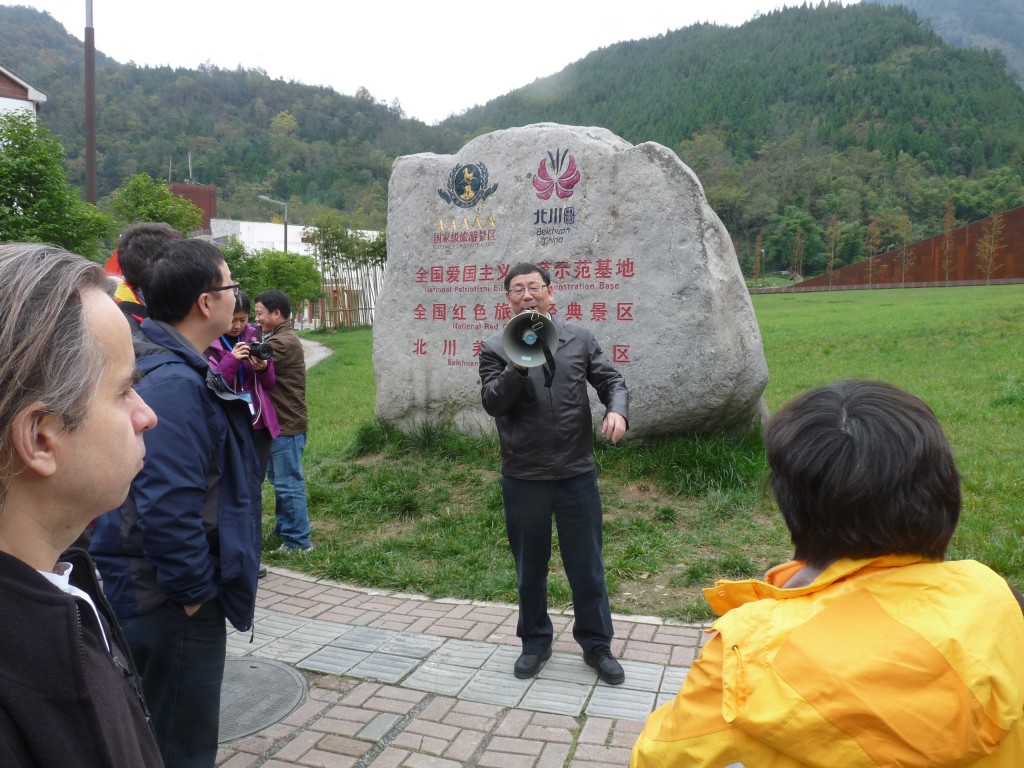 It was particularly striking to see first-hand the effects of the landslides that devastated both the northeastern and southwestern parts of Beichuan, as well as the post-earthquake influx of sediment that has buried parts of the ruined city by more than 20 m: 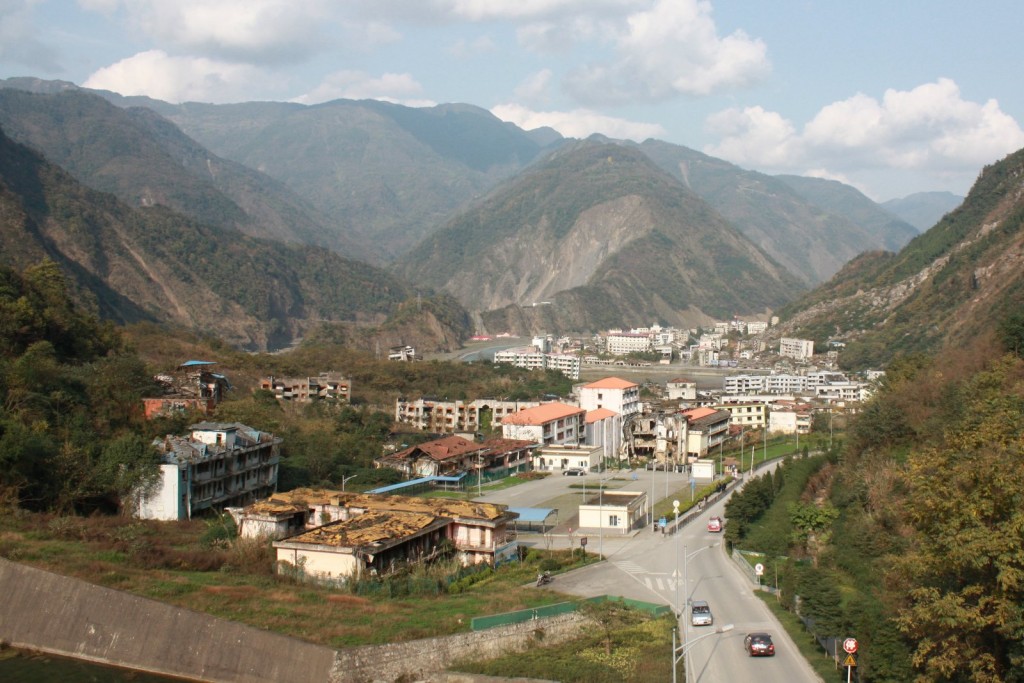 The team was impressed, and heartened, to see that survivable buildings can be, and were, built in Beichuan – not with any special techniques or materials, but with care and attention to building codes. More widespread application of those practices would undoubtedly have prevented at least some of the loss of life. The photo below shows a house that was built immediately adjacent to the largest surface rupture that occurred during the earthquake – more than 10 m of slip. Despite this enormous offset of the ground, and the intense shaking, the house was essentially undamaged: 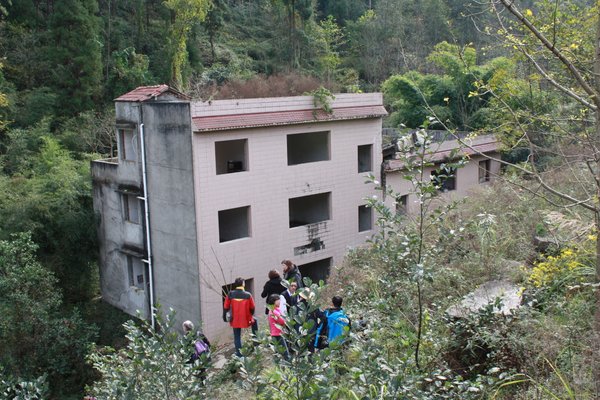 The next day, the EwF team, Zhang Jun of EwF partner organisation GDS, and representatives of NERC and ESRC visited Yingxiu, a town that has taken a very different path than Beichuan after the earthquake. Of the 12,000 residents in Yingxiu before the earthquake, more than 7,000 were killed, and most of the town was flattened. 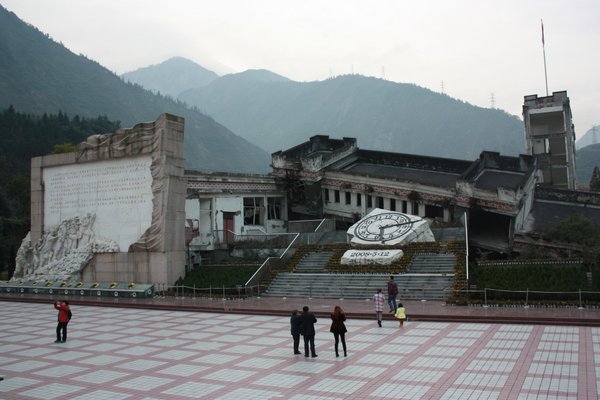 Like Beichuan, Yingxiu has a museum commemorating the earthquake and its victims, including an excellent display, upon we might draw in working in the Weihe Basin, on earthquakes in general, what happened in the Wenchuan earthquake, how buildings can be strengthened against earthquakes and what people, particularly children should do in an earthquake: 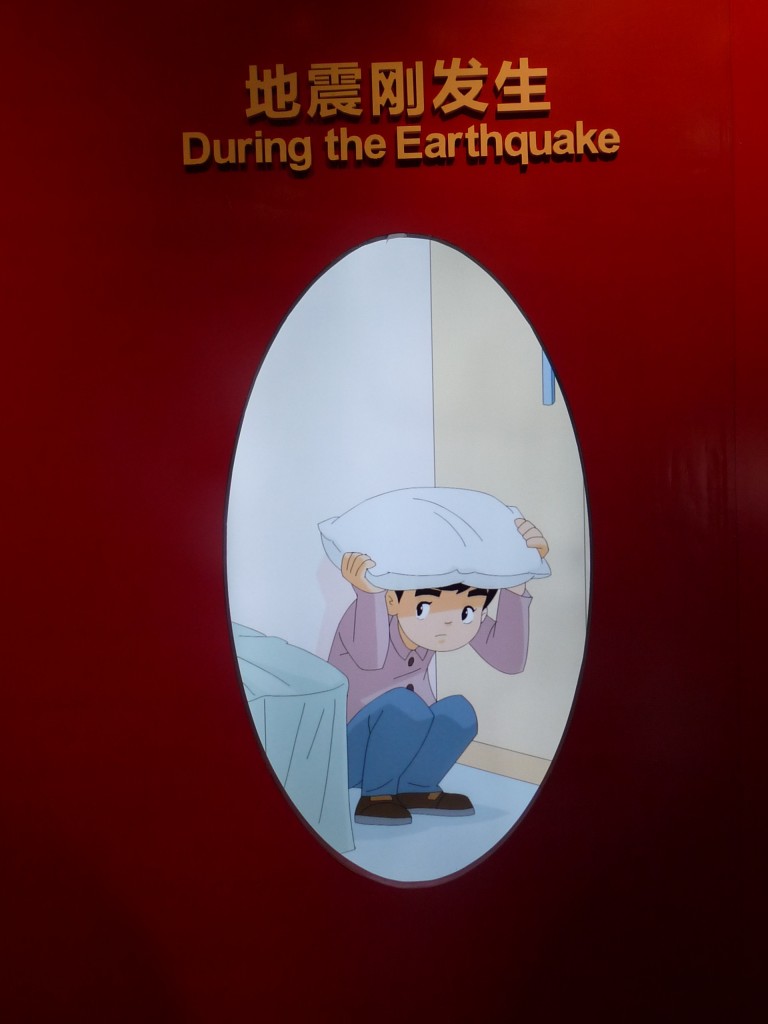 Similar displays could be very useful for educating communities in the Weihe Basin on earthquakes and how to prepare for them. Unlike Beichuan, however, Yingxiu was rebuilt in place, using architecture that reflects the Qiang ethnicity in the region. We visited the new Yingxiu Primary School and met the staff of the Sichuan Expanded Mental Health Network, which has been active in rehabilitation and recovery efforts in Yingxiu since shortly after the earthquake. Dr Tim Sim of Hong Kong Polytechnic University, part of the EwF team and other members of his team, had a chance to describe the impressive work that has been undertaken in helping children, parents, and teachers to cope with their losses. The visit culminated in a village guozhang dance and barbecue in Zhangjiaping, where the EwF, NERC and ESRC teams joined in the dancing and singing – to much amusement all around.

After an intense three days of workshop discussions, it was very welcome to spend a few days in some of the communities that had been so badly affected – to see the awful destruction that earthquakes can wreak, to be emboldened by the stories of hope and survival, and to remind ourselves yet again of why we do this work and why resilience is such an important part of the recovery process.