The legacy of the September 2012 Yunnan earthquake sequence

In early September 2012 a series of small but shallow earthquakes affected Yunnan Province in China.  The main events were two earthquakes on 7th September, an Mw=5.6 event at 03:19 UTC (11:19 local time) and a Mw=5.3 event at 04:16 UTC (12:16 local time).  Although small these two earthquakes caused considerable damage in the epicentral area, with a reported 81 fatalities, 800 injuries and over 6500 houses destroyed.  Direct economic costs are estimated to be over $500 million.

The worst affected area was Yiliang County.  The chaotic scenes during the earthquake, and in the aftershock sequence, are well-captured by this amateur video that was recorded at the time:

Unfortunately, it is a common facet of earthquakes in mountain areas that they leave a legacy of unstable slopes, many of which then collapse as landslides in the first heavy rainfall event.  In Yiliang this appears to have happened yesterday, resulting in a genuine tragedy.  In the town of Zhenhe,  within Longhaixiang Township in Yiliang County a slope collapsed without warning yesterday morning, burying a primary school.  In total 18 young children, who were in the school to take additional classes on the National Day holiday in order to make up for the schooling that they lost as a result of last month’s earthquakes, were killed.  A local person also died. 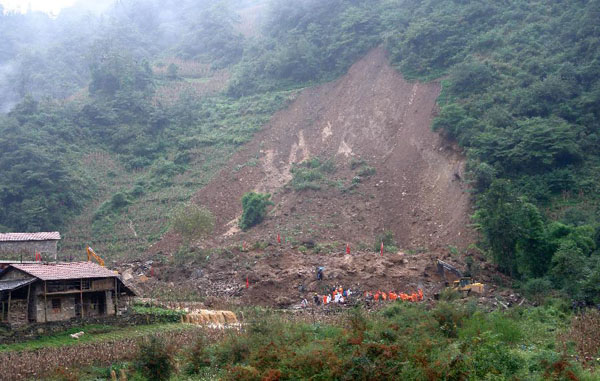 Unfortunately, it is likely that further landslides will affect this area in the coming months or even years, meaning that careful hazard management will be essential.