This article was first published in the Blue Marble,The magazine of the UK’s National Centre for Earth Observation, in Winter 2011.

Almost two hundred people died in the recent earthquakes in New Zealand.  Now, with careful analysis of radar measurements, NCEO scientists have discovered that the hazard for the city’s inhabitants may not have gone away. In September 2010, a large earthquake surprised the population of the South Island of New Zealand. It
ripped a 30km tear across farmland outside the city of Christchurch. In just a few seconds, roads, trees and fences were jolted sideways and permanently shifted by up to four metres. Fortunately, no one was killed. Then, less than six months later, another big
quake shot up right under the city. This time, the sheer proximity of the earthquake resulted in the deaths of 186 people and a partial exodus as others sought temporary refuge elsewhere. 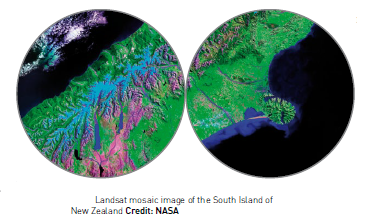 Earthquakes are common in New Zealand and the country’s geological survey has mapped many faults in the Southern Alps of the South Island. The whole country is being squeezed and stretched as the geological plates of the Pacific and Australia collide.
New Zealanders are caught in the middle of a tectonic struggle that has been going on for millions of years.

Chicane
The earthquake danger for the region of Christchurch (with a population of 330,000) was thought to lie on mapped faults high up in the hills and snow-capped mountains, not in the low-lying regions of the fertile Canterbury Plains on which the city lies. However, both recent major earthquakes happened on previously unknown faults, hidden beneath the gravels of the Canterbury Plains. These faults are not the fastest moving in New Zealand and probably have not ruptured for many hundreds or thousands of years. Satellite radar
and optical images are allowing my colleagues and I at the Centre for Observing and Modelling Earth’s Tectonics (COMET+) to find the exact locations of the faults that broke in these earthquakes and, perhaps more importantly for assessing future seismic
hazard, the places that did not.

The ground can be permanently moved by metres in large, shallow earthquakes
as trillions of tonnes of the Earth’s outer crust are shifted in a matter of seconds.

In the first New Zealand earthquake, parts of the northern end of the Canterbury Plains were pushed closer to the city by up to four metres. At the fault line, this caused a big step in the criss-crossing pattern of roads that were previously constructed straight, resulting in a chicane as if on a racing track. We have used satellite images from WorldView-2 with a half metre resolution to measure 50 of these bent roads and hedges. These can then be compared to what our field geologist colleagues measured on the ground in the days after the earthquake. 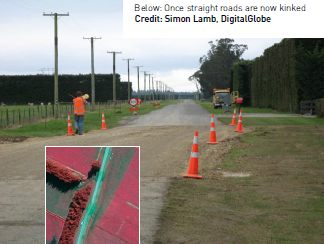 On the ground, however, it is only possible to make measurements along the line of the fault where the offsets of roads and fences can be found. We get a much bigger and better picture of the smaller ground movements when we use satellite radar measurements. These observations are also more useful than those
from optical imagery ones, as they can be used at night and in cloud because the radar signal goes right through the haze.

Elastic band
The radar instrument on board a Japanese satellite called ALOS acquired images before and after both earthquakes. By looking at the difference in time it took the radar to bounce off the Earth and return to the satellite, it was possible to create a map of how far the ground moved in each earthquake. By using simple models of the Earth that treat it like a
big elastic band, we can find out where the faults lie because this is where the earth has snapped the most. Perhaps more importantly, our models indicate that there has been very little ground motion in-between these two earthquakes. This is referred to a seismic
gap and lies to the western edge of Christchurch. If a potential fault line lies here then it is under increased pressure and could break in the future – the gap being long enough that the earthquake generated could be just as big as before.

The population of Christchurch now faces an uncertain future and some difficult choices.
Earthquakes cannot be predicted and the uncertainties in the probabilities of more significant earthquakes in the coming decades are large. The conclusions we draw from the satellite observations will permit a much more informed decision to be made by the New Zealand government regarding the location and strength of future buildings in the region; something that would not have been possible at this level of precision prior to the advent of remote satellite observations.