Over the past six months Sam and Katie have been engaging in research to examine how earthquake risk reduction (EQRR) is governed in Nepal and the Indian State of Bihar.   A series of interviews and focus group discussions have been undertaken with a range of stakeholder groups, including international organisations, government bodies, and national and international NGOs, with a view to understanding the policy and legislative context and the role of different stakeholders in EQRR.  This stage of the research has focused on state level policy and planning and below we offer some preliminary reflections.  The next phase will explore how national level policy plays out at the local (district/village) level; and how earthquake science is currently informing policy and practice.

The EQRR landscape in Nepal is complex, reflecting a post-conflict state with a weakly functioning government.  This is undoubtedly a challenging environment in which to build an earthquake resilient society. Indeed, the Disaster Management Act, which was first drafted in 2007, still has not been ratified. Fortunately a UN Development Programme-funded initiative to develop a national strategy is serving as a common foundation to guide stakeholder interventions. With relatively high levels of funding being channelled through multi-lateral and bi-lateral donors, a considerable amount is being achieved in terms of EQRR. This includes retrofitting hospitals and schools, the identification of open spaces in Kathmandu for use in disaster situations, community-based risk reduction and institutional strengthening.  The number of stakeholders involved creates significant coordination challenges. These are being effectively addressed by the Nepal Risk Reduction Consortium (NRRC).

But is this a sustainable scenario?  There are aspects of EQRR that require strong centralised governance, for example establishing and overseeing national emergency operating centres and maintaining critical lifeline services.  This role does not necessarily need to be played by the state but it does require a long term vision, resources and authority.  Currently the NRRC is taking a strong lead in this area but what next for Nepal? Findings suggest that the Government of Nepal needs to accord higher priority to developing institutional structures such as a national disaster management authority so they can own the process and lead future resilience building in Nepal.

In the Indian State of Bihar, by comparison, EQRR is in its infancy.  For a long time, the focus of the Government of Bihar (GoB) has largely been disaster relief, a reflection of the State’s susceptibility to flooding and the catastrophic 2008 Kosi flood disaster.  However, the current Chief Minister is making disaster risk reduction (DRR) a key priority.  This began in 2007 with the establishment of the Bihar State Disaster Management Authority (BSDMA) to manage DRR activities across the state.   While the BSDMA was relatively inactive until the current Vice-Chairman was appointed in 2010, rapid progress is now being made.  New legislation is being drafted and ratified, while older legislation is updated.  Examples include the State Disaster Management Plan along with standard operating procedures, the Bihar Urban Planning and Development Act and building by-laws, with guidance provided by the National Disaster Management Authority.  But, while there are plans for a national and district level emergency operations centres and for all new buildings (public and private) to adhere to earthquake safe standards, there are currently no formalised plans to retrofit existing building stock – even priority life line infrastructures including hospitals.

Despite Bihar receiving very little donor funding for DRR, funding is not considered to be a major constraint on EQRR implementation with funding provided by the State Government.  However, a lack of awareness amongst government stakeholders and the wider public, along with limited capacity and expertise particularly in technical sectors such as civil engineering and architecture, are cited as key constraints.  Efforts are being made to address this gap through training programmes which are being rolled out at the state, district and panchayat levels.  These include state-wide training programmes for engineers, architects, contractors and masons. 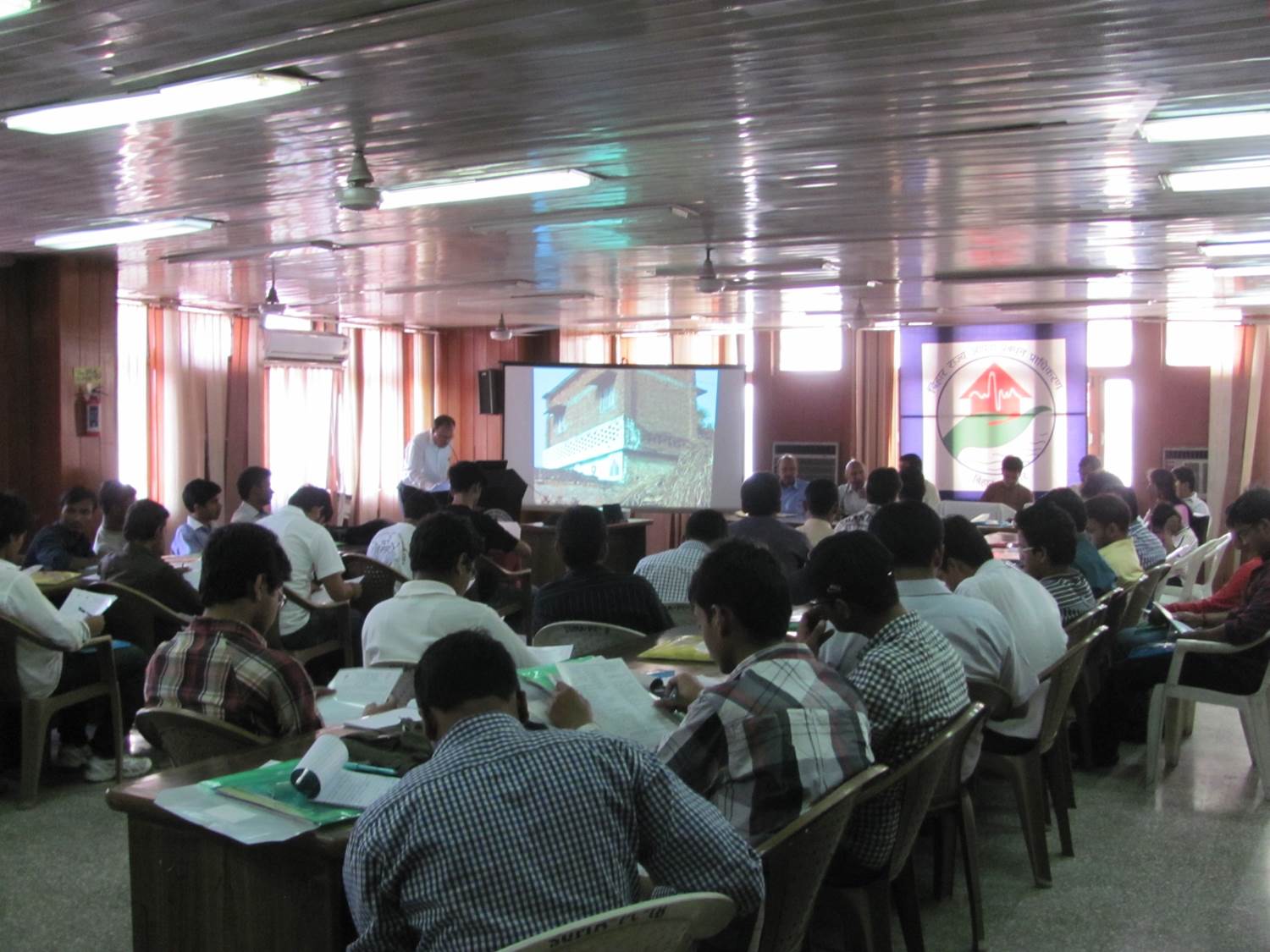 Lectures on earthquake engineering for engineering students organised by the BSDMA (source: BSDMA)

While there is a lot of political will in Bihar at the highest level of government, the GoB does not seem to be planning for a major earthquake tomorrow, whereas in Nepal, certainly among donors, there is a recognition that a devastating earthquake could happen at any time and the country needs to be ready.  The earthquake felt in Kathmandu a few weeks ago will hopefully provide continued impetus for on-going preparedness efforts in the region.