The 2015 Gorkha earthquakes triggered more than 22,500 landslides, focused along the major river valleys in the hill and mountain districts of central and western Nepal, and were equivalent to several hundred years of ‘normal’ monsoon-triggered landslide activity in these districts. The 2015 monsoon caused numerous additional landslides, focused in the areas that were hardest-hit during the earthquake, and at rates that were still 10-20 times greater than a normal monsoon. The 2015 monsoon also reactivated many of the landslides that were triggered by the earthquake, generating highly mobile debris flows (mixtures of sediment and water) that have travelled long distances downslope during intense rainstorms.

The 2015 monsoon strength was widely considered weaker than normal. As expected, during the dry season (October 2015 – June 2016), few landslides have changed. The 2016 monsoon is forecast to be normal, and so more intense than 2015, and so landsliding is expected to be as, if not more, severe in 2016. Furthermore, areas with the greatest degree of landslide activity in the earthquake and the 2015 monsoon will be at greatest risk of further landsliding, including debris flows, during the 2016 monsoon.

Landslides – both those triggered by the earthquake, and by subsequent rainfall – pose two forms of hazard to people and infrastructure (Fig 1): 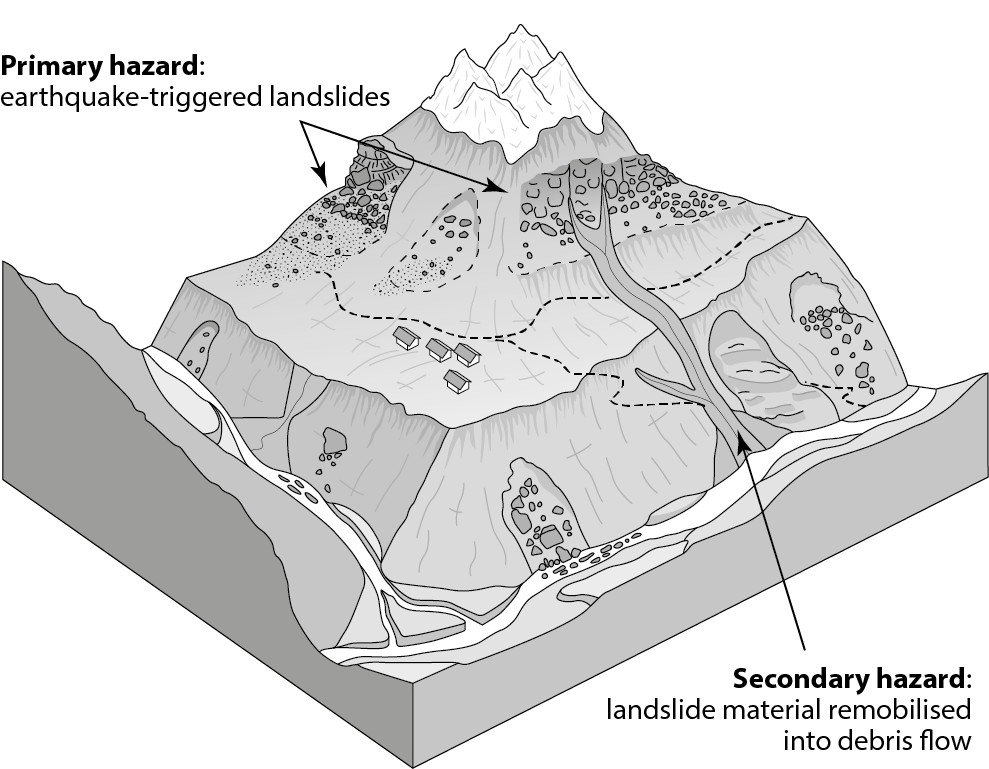 Fig 1. Schematic view of landslide hazards in earthquake-affected mountain districts of Nepal after the 2015 Gorkha earthquake. Landslides triggered by the earthquake (primary hazard) are focused high on hillslopes (typically above most settlements) and along valley floors. Landslide material is then remobilised into debris flows (secondary hazard) that travel down along existing channels or gullies and affect valley floors.

These different types of hazards have very different impacts and require different mitigation measures. Both forms of hazard, however, increasingly have major impacts on the densely populated, valley bottom settlements, adjacent to major transport corridors. Whilst it is effectively impossible to predict the exact locations of the primary hazard, simple rules of thumb can be used to identify the most risky locations:

Observations from the earthquake affected districts, along with direct comparative experiences from the 1999 Chi-Chi, 2005 Kashmir, and 2008 Wenchuan earthquakes, shows that landslides and debris flows will occur at higher-than-normal rates in the earthquake-affected area for the next years to decades. The districts shaken by the earthquake still have many areas of cracked ground (Fig 2), which may develop into landslides during the monsoon, as seen during the 2015 monsoon from the analysis of repeat satellite images (Fig 3 – 4). Monitoring of these districts and analysis of how landslides are changing since the earthquake is, to date, inconclusive about the future risk. It is not currently possible to be more precise about the duration of this enhanced landslide activity, and it is likely to vary with both location and monsoon strength. 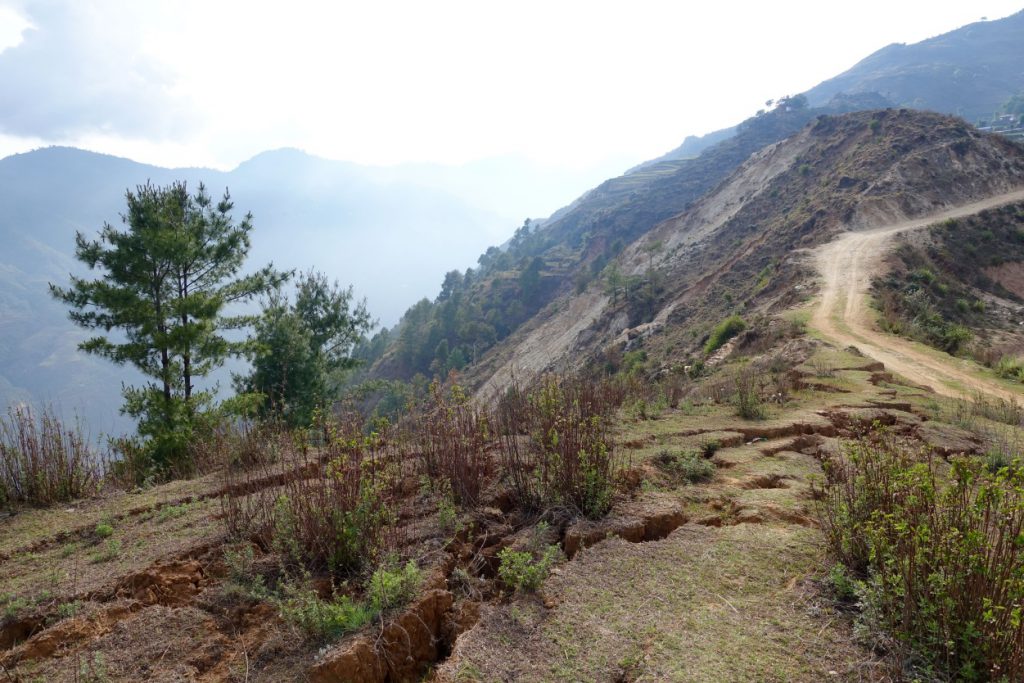 Importantly, it should not be assumed that the hazards described above are ‘finished’ and are no longer an issue in 2016 or later. Indeed, areas which have previously experienced a landslide are highly likely to experience further landslides. Quiescence during the dry season is not an indication of future stability during the monsoon. The nature of landslide hazard will evolve, and there is no precedent for how this will play out, so monitoring how this evolves is important to assess risk. 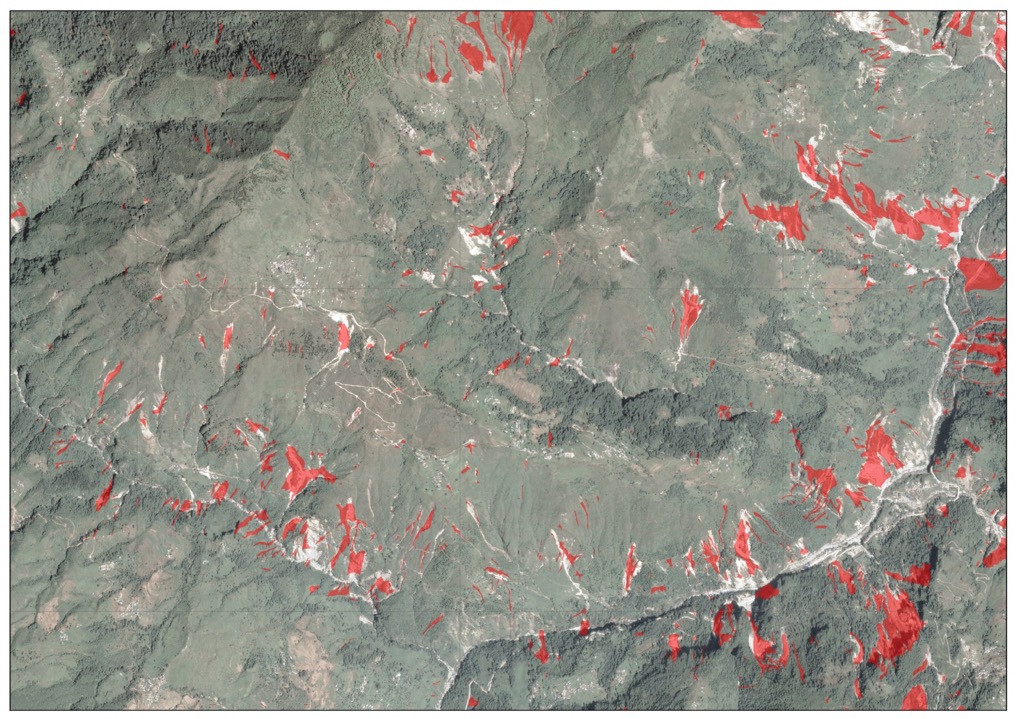 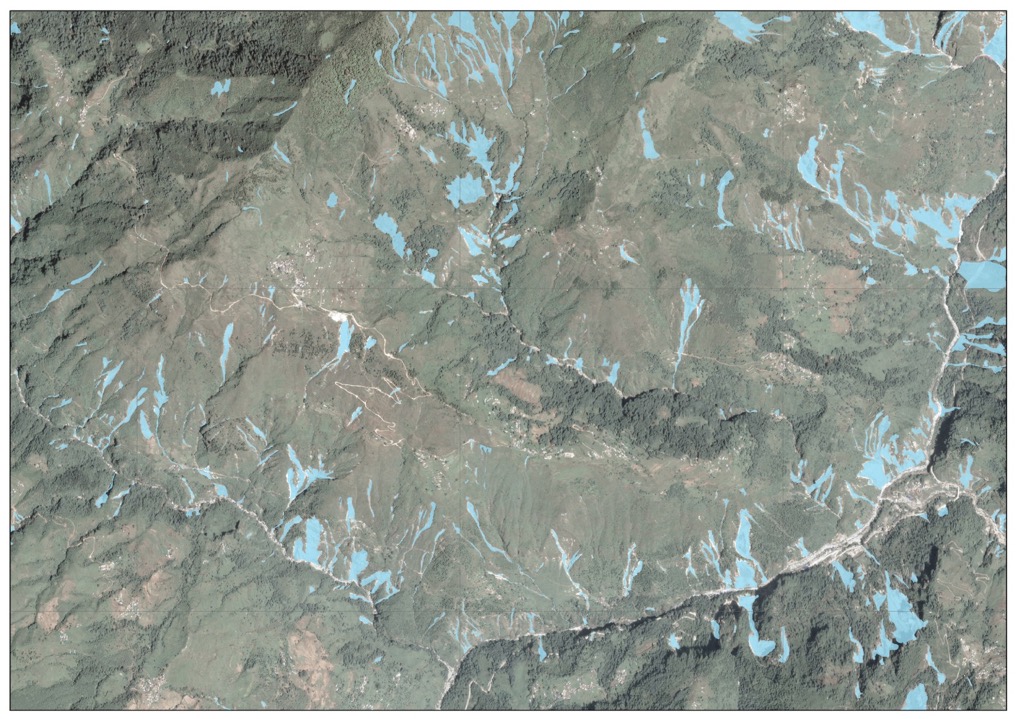 Fig 4. The extent of landslides after the 2015 monsoon, showing an increased occurrence of landsliding reaching the valley bottoms. Area shown is Listi VDC, Sindupalchok. Image width is c. 6 km.

The World Meteorological Organisation publishes the consensus outlook for the South Asian Summer Monsoon in April[1]. In summary, El Niño conditions have weakened, and are predicted to continue to weaken over the summer, with La Niña conditions developing later in the season. Comparison with historical records suggests that such conditions are coincident with normal and above-normal rainfall over the South Asia region. In Nepal, it is predicted that the 2016 monsoon will generate near-normal rainfall over the majority of the country, including the earthquake-affected districts, with above normal in the far south west and below normal in the east. If La Niña conditions to develop later in the season, increased levels of rainfall may be expected.

From the perspective of landslide risk, this forecast suggests a stronger monsoon than 2015, and so a heightened risk from rainfall-triggered landslides in 2016. Landslide risk relates to both: (i) a long-term build-up of moisture in the ground through the monsoon period, and (ii) extreme intensity short-duration rainfall. Both conditions can generate hazardous landsliding. The monsoon onset in Nepal is normally expected on 10th June with the cessation on 23rd September. Whilst intense pre-monsoon rainfall in early May has already triggered several fatal landslides in Nepal (e.g. Kotwada VDC, Kalikot, 20th May) and led to some road blockages (e.g. the Arniko Highway on 20 and 24 May), the 2016 monsoon onset is widely regarded to be delayed.

Whilst it is effectively impossible to negate the risk posed by landslides in Nepal, simple measures can reduce exposure: