Field work on the Dzhungarian Fault in Kazakhstan

The Tien Shan in Central Asia is one of the largest mountain belts on Earth, stretching for more than 1500 km. Its ongoing deformation is driven by the collision of India with Eurasia. Some of the strongest intracontinental earthquakes that we know about have hit the region around one hundred years ago and large thrust faults take up much of the active shortening.

Several major strike-slip faults are known in the Tien Shan as well. Among them is the Dzhungarian Fault, a NW-SE striking right-lateral structure that forms one side of the famous Dzhungarian Gate. The fault reaches from Eastern Kazakhstan into China and has a length of several hundreds of kilometres. There are no reports of historical earthquakes on this fault, although there is some debate whether or not the Chinese part ruptured in an earthquake in 1944. Recently, Campbell et al. (2013) studied the Dzhungarian Fault, measured a Late Quaternary slip rate, and found clear morphological hints for Holocene movement. Now an EwF team conducted further field work to continue the investigations on the earthquake history and the slip rate of this impressive feature.

Before we started the 2015 campaign we analysed high-resolution satellite images and identified the most promising sites for field work. We concentrated on sites where the fault offsets geological markers like terrace risers, alluvial fans, ridges, and streams. In some parts we found relatively recent fault scarps. These sites would hopefully allow us to date the occurrence of the last earthquake and to get an idea of the magnitude. At other sites we looked for larger offsets across the fault in order to estimate a long-term slip-rate.

River terraces are offset both horizontally and vertically by the fault.

We started our work in Usharal near the northwestern termination of the fault and ran a reconnaissance trip to verify field work sites. The area near the Kazakh-Chinese border seemed to be promising and so we set up our camp at a river near the border town of Druzhba in the southeast. It’s quite important to find a good camp site with fresh water in this semi-arid area, as this is the only way to have a (very cold) shower after a long day of field work… 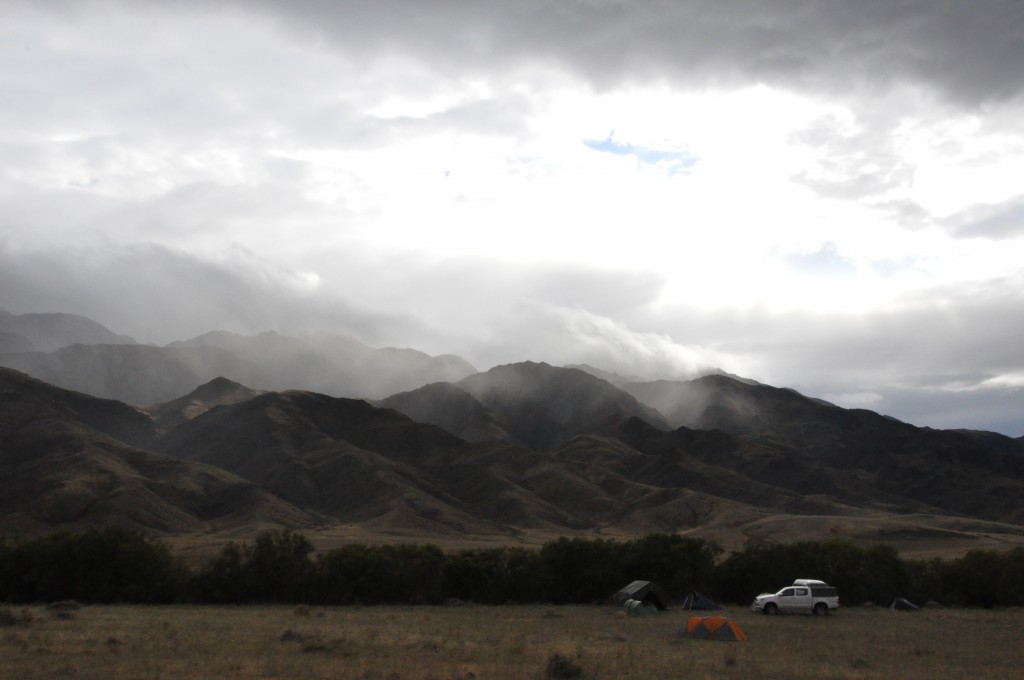 One of our camp sites at the fault.

In the field we mapped the fault trace and measured the offset of morphological markers with differential GPS. For producing detailed digital elevation models (DEMs) of the most interesting targets we used our helium balloon and collected aerial imagery. (Unfortunately, our quadcopter drone had crashed earlier and so we could not make use of this more flexible UAV.) A photogrammetry technique called Structure-from-Motion allows us to compute DEMs from aerial imagery with a fantastic resolution in the centimetre range. 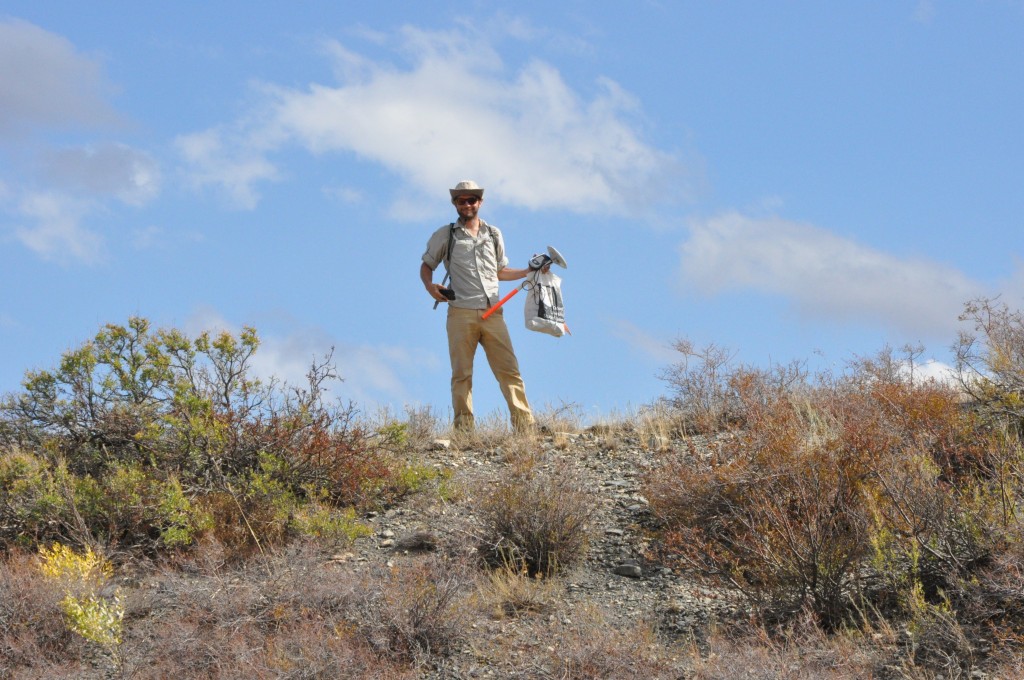 We encountered impressive strike-slip morphology along the fault. Often there are several parallel traces that show hints for recent movements and the fault nicely offsets entire mountain ridges. Small pull-apart basins and ponds formed along the fault, springs mark the fault trace, and push-up ridges can be seen. Alluvial fans are offset from their source streams and recent incision testifies to rather young tectonic movement. 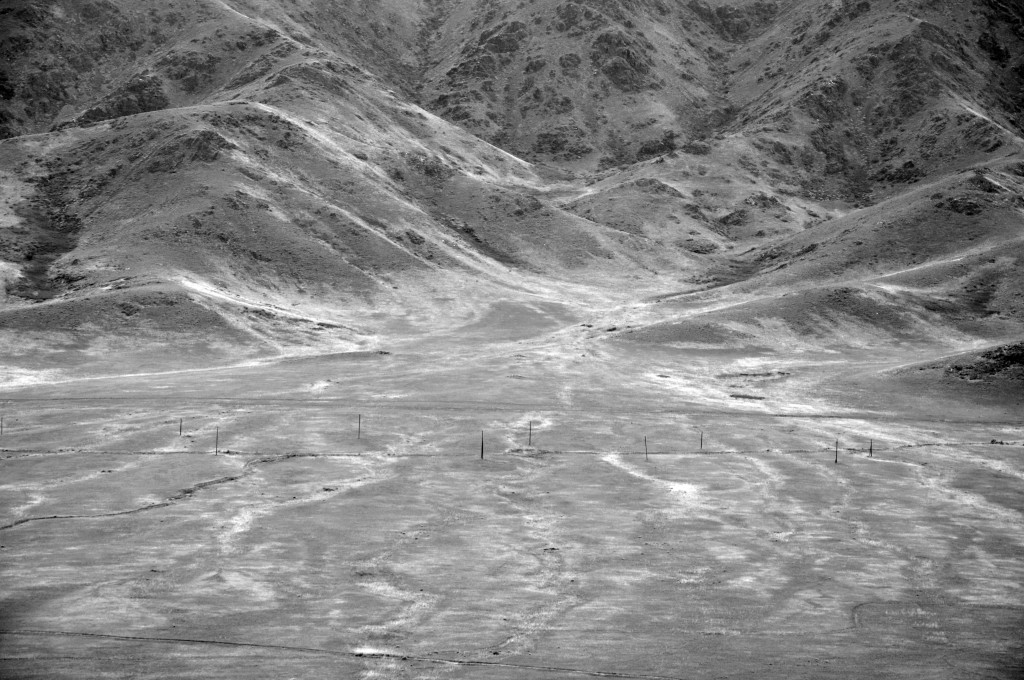 The fault scarp is visible in the alluvial fans. 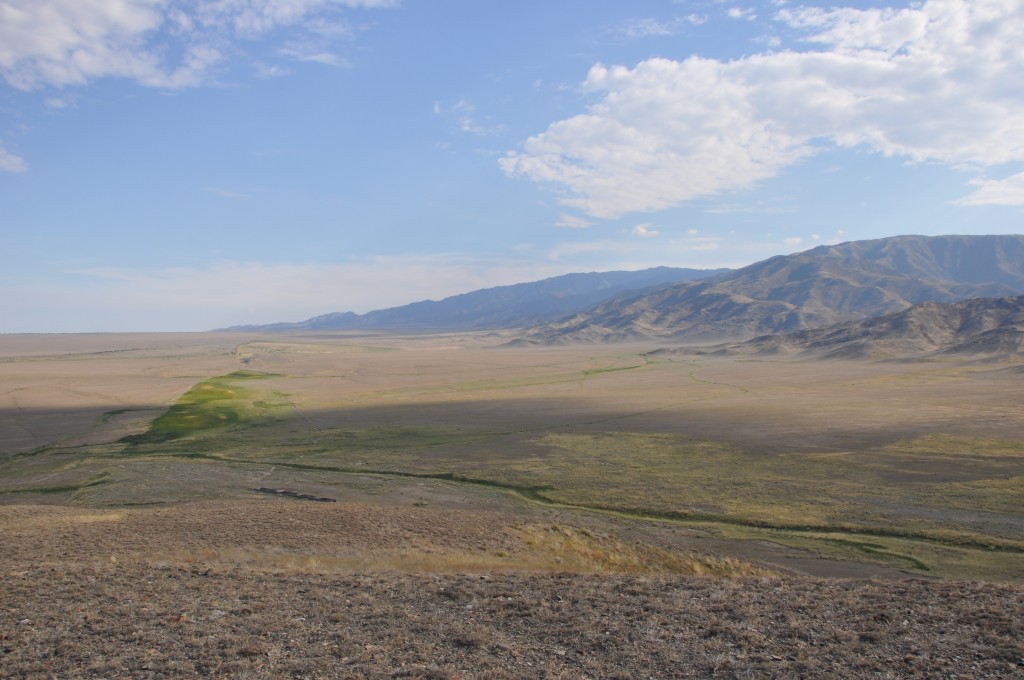 The fault trace is marked by springs and scarps. 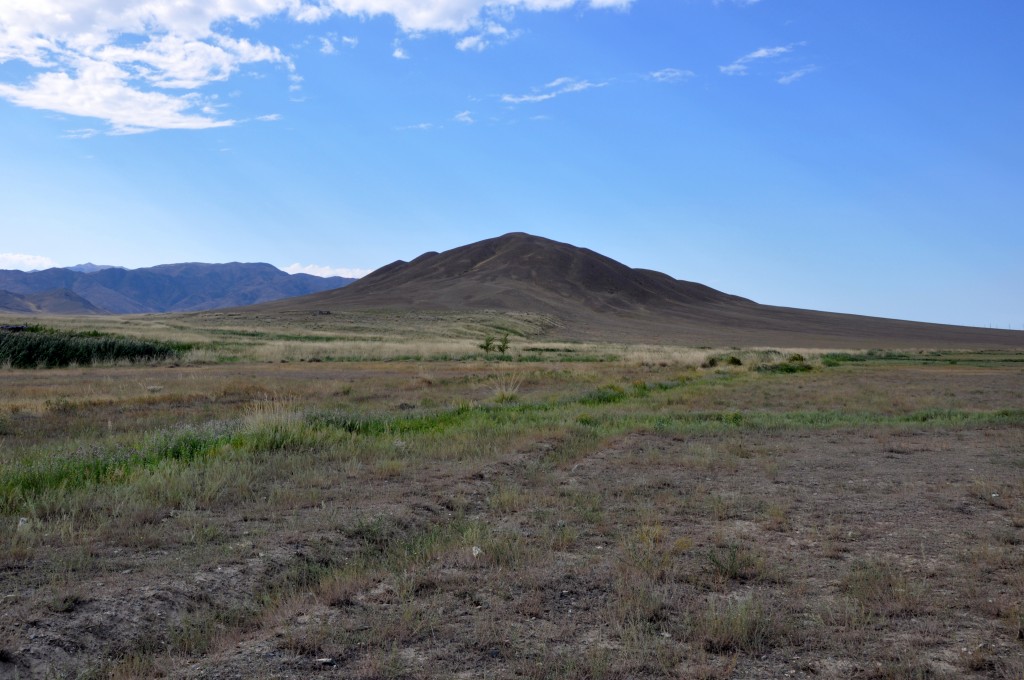 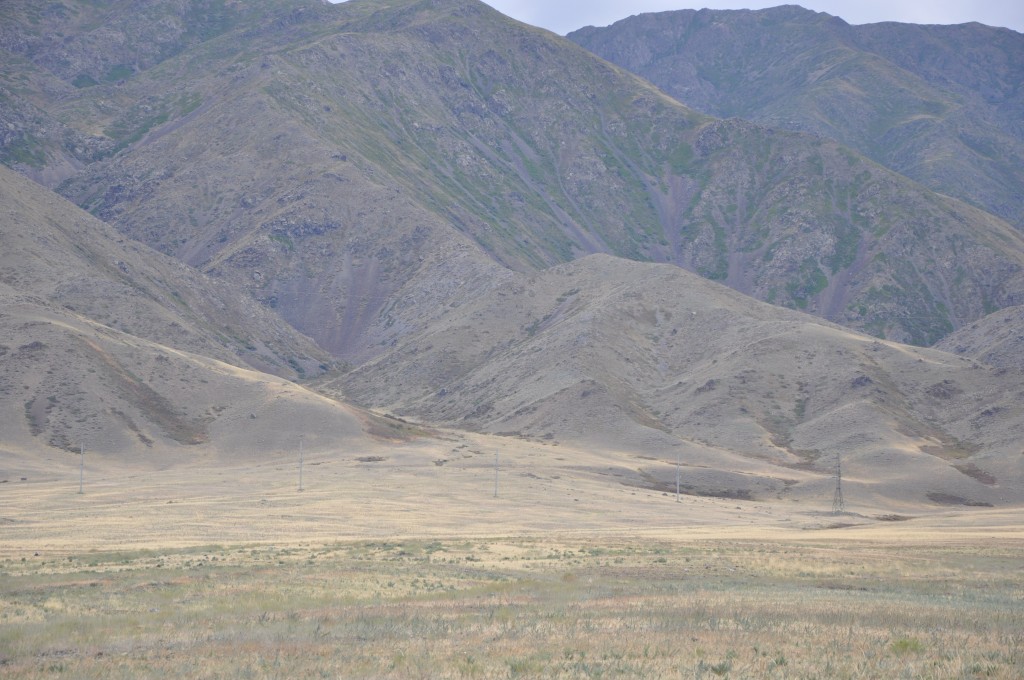 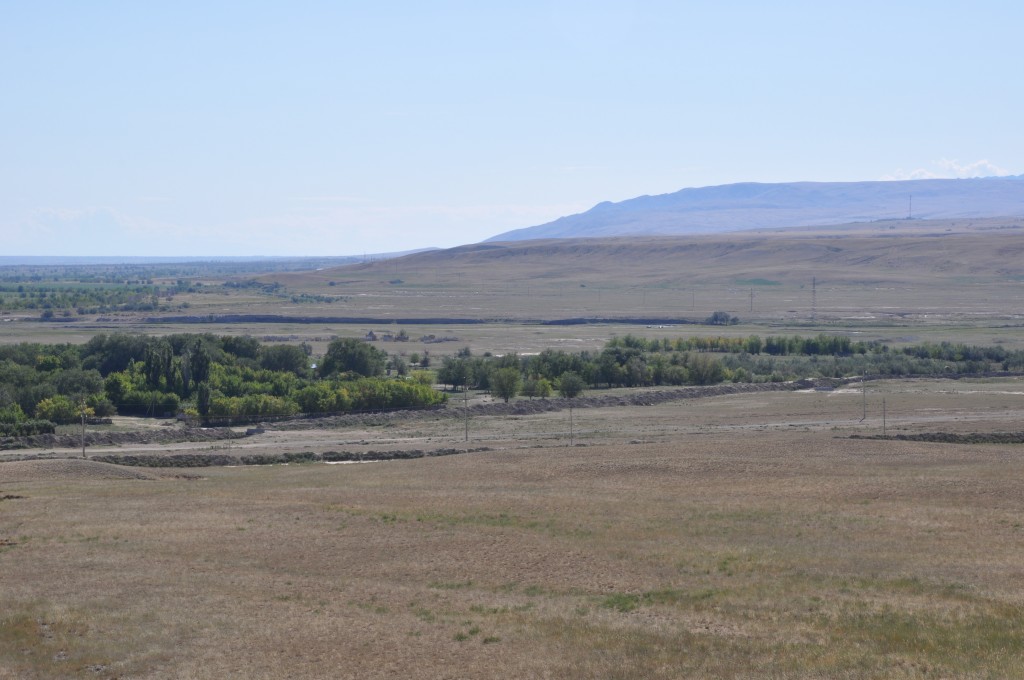 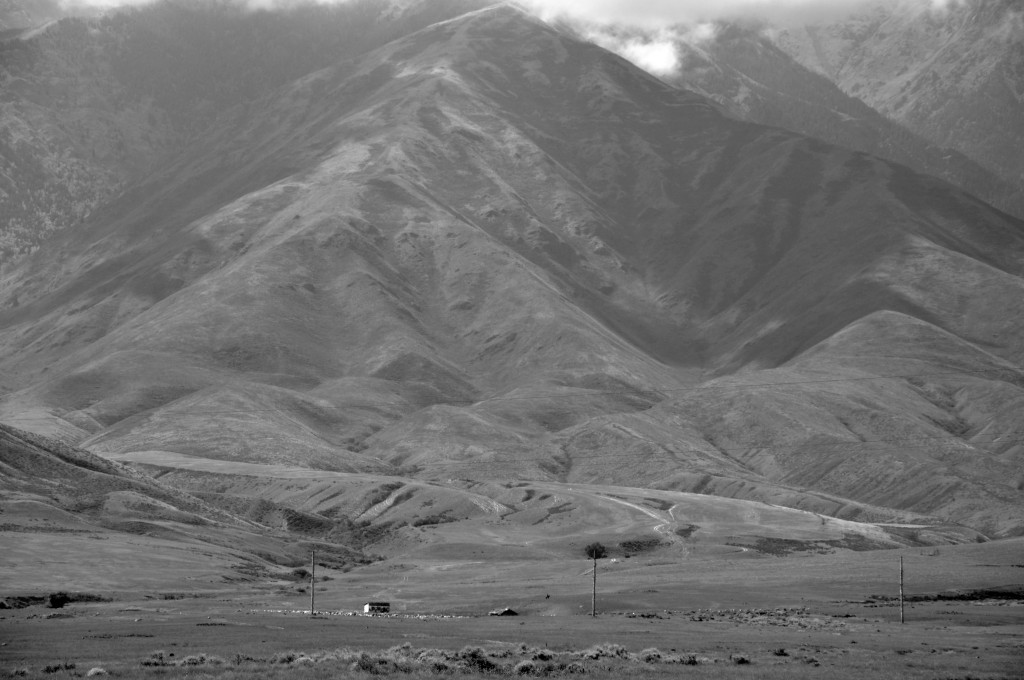 The offset landforms must be dated in order to calculate slip rates along the fault. For this reason we dug pits into abandoned river terraces and alluvial fans to find out when they became inactive. We found some material suitable for 14C dating, but often we had to sample fine-grained material for optical stimulated luminescense (OSL) dating. 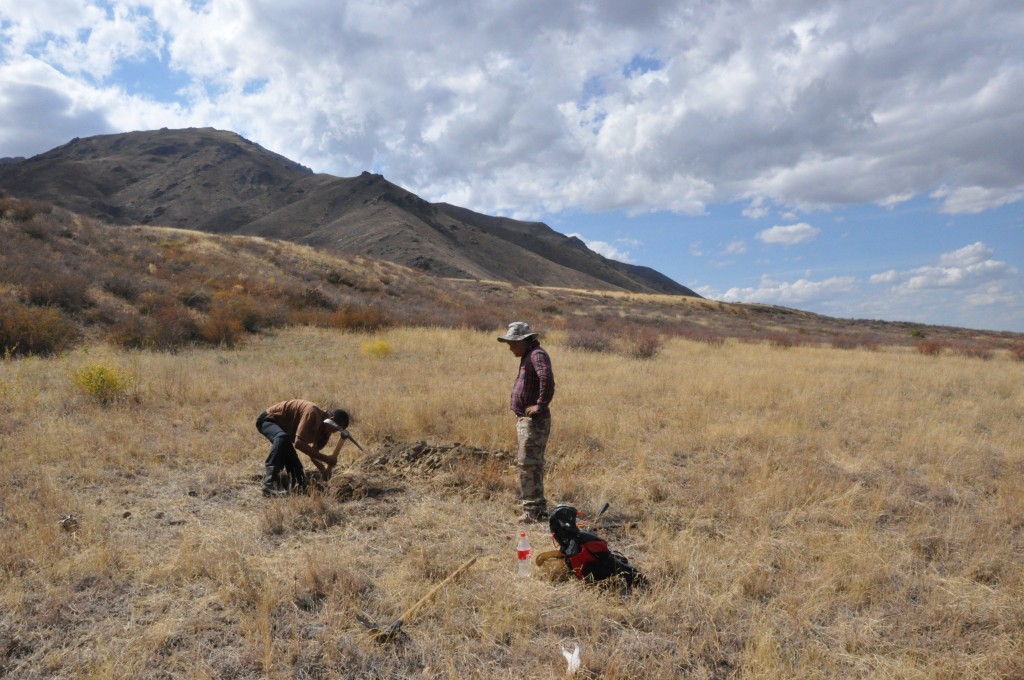 Digging into an abandoned terrace surface in order to get datable material. 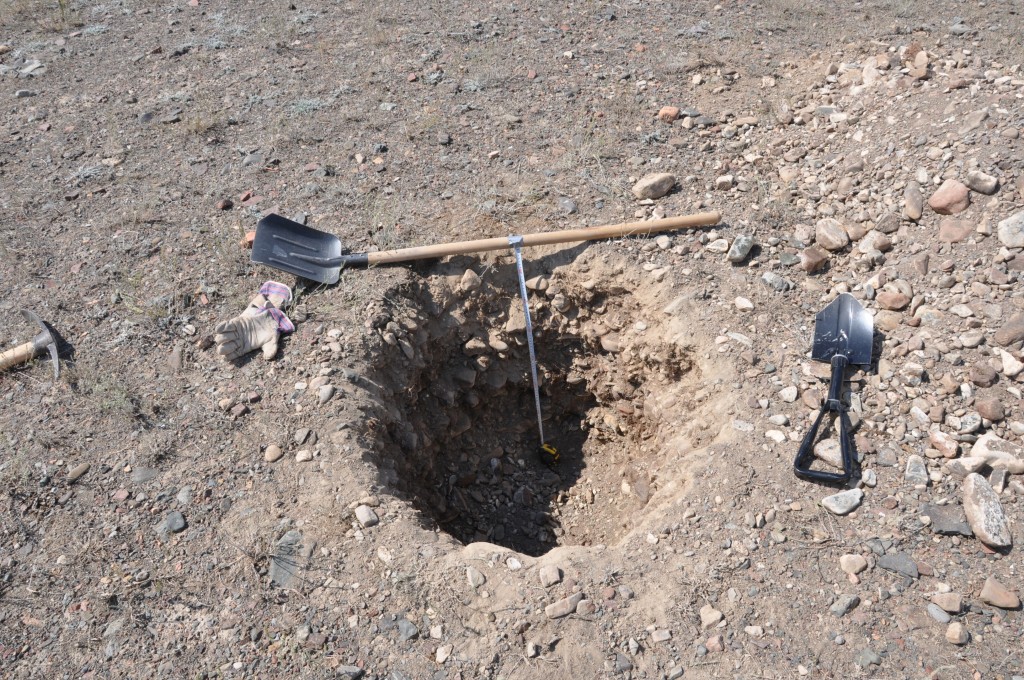 We worked our way back towards the northwest and changed camp several times. The landscape is wide and the roads are challenging, so it is necessary to set up camp close to the field work site. One of the most interesting sections of the fault was unfortunately inaccessible – a tank shooting range was established right on a fresh-looking fault scarp… 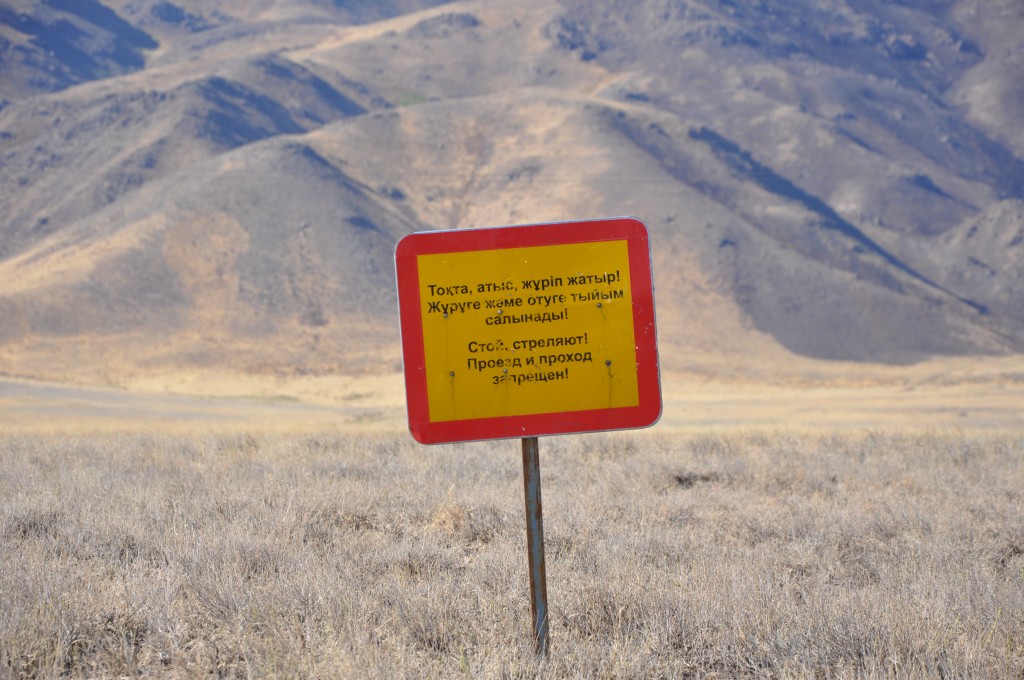 Go away. This is a tank shooting range.

After many days of great field geology we drove back to Bishkek and organized the shipping of the samples. They already arrived safely in the UK where they are being analysed. Currently we are producing the DEMs and we process the DGPS data.

We’d like to thank Kanatbek Abdrakhmatov, Aidyn Mukambayev, our drivers, and the cook who made this field trip a great success. 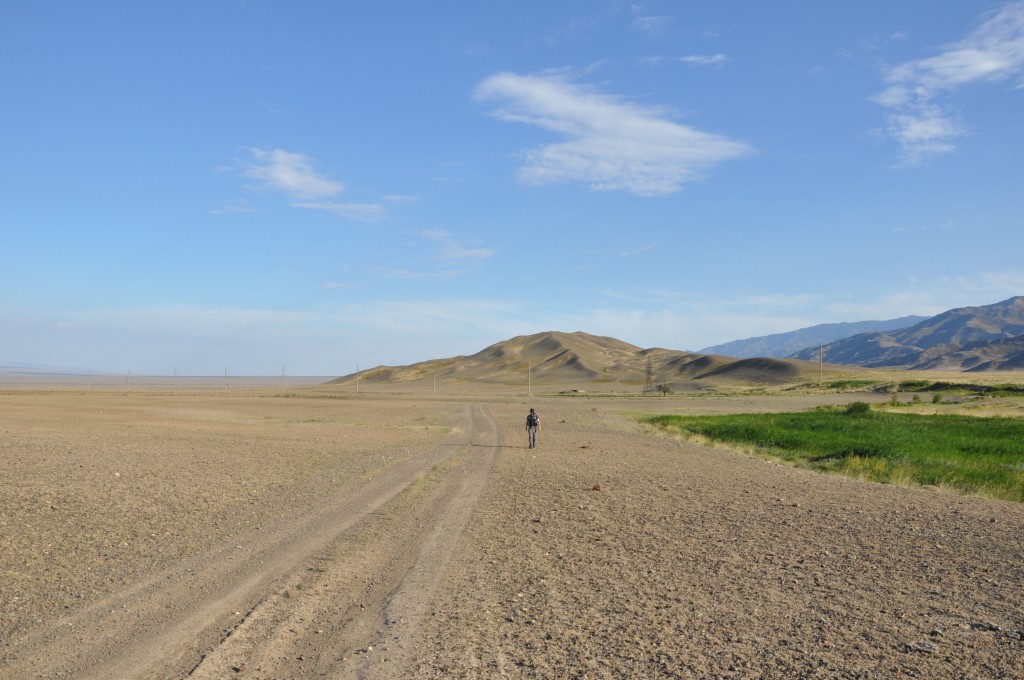