Field work in the epicentral area of the 1889 Chilik Earthquake, Kazakhstan

A series of great earthquakes struck the northern Tien Shan around one century ago. In 1887, an earthquake (M>7) flattened the city of Verny, today’s Almaty. One of the strongest continental quakes that we know about hit two years later. With a magnitude of ~M8.3 the 1889 Chilik earthquake occurred in between Lake Issyk Kul and the Ili Basin. Finally, in 1911 the Chon-Kemin Earthquake struck north of Issyk Kul. This event is also estimated to have exceeded M8.

A few months ago, an EwF team conducted field work in the epicentral area of the 1889 Chilik earthquake. We aimed to investigate potential surface ruptures associated with this event and to measure the slip rate of the causative fault. 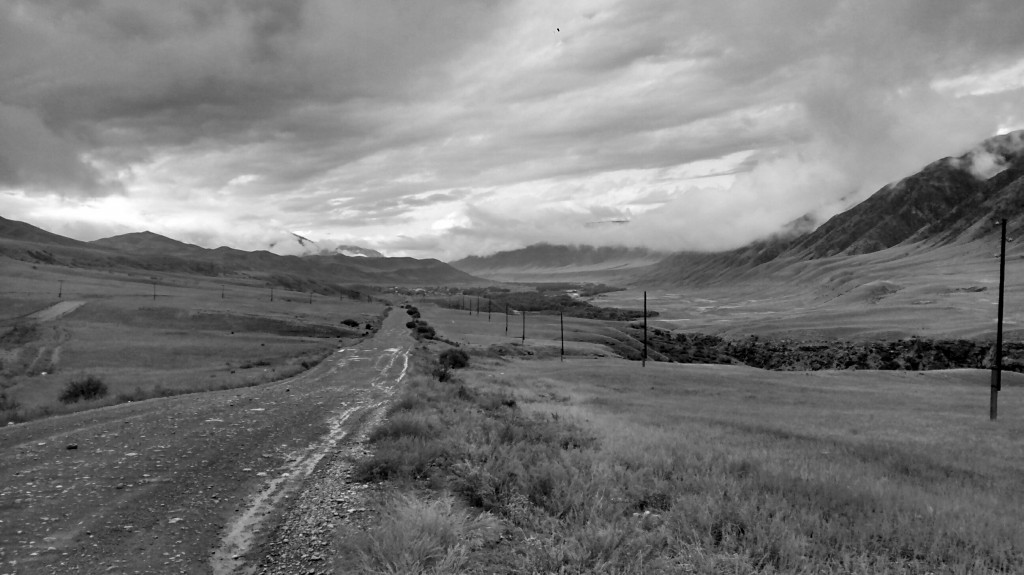 We focussed our research on the area of Saty, which is located at the Chilik (Чилик) River in Kazakhstan, close to the border with Kyrgyzstan. Here, fresh surface ruptures were found in the past and a paleoseismological trench was excavated south of Saty. On the northern side of the river, however, the trace of a fault is visible along the mountain front, and virtually nothing is yet known about it. 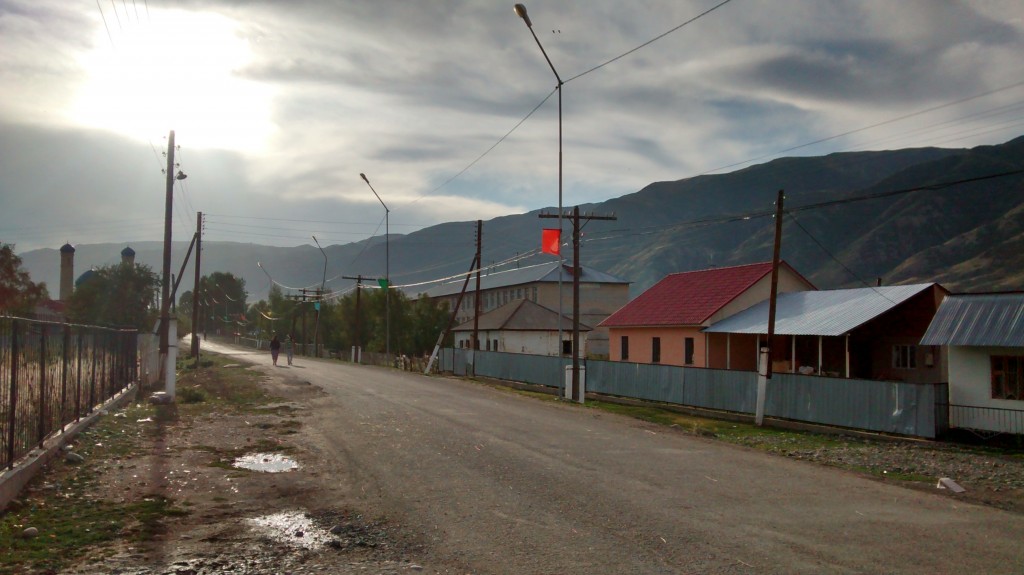 Saty and the Chilik River. Surface ruptures, most likely from the 1889 earthquake, were found right next to the town.

We used a helium balloon to take aerial images of the fault. With overlapping images, we can run Structure-from-Motion (SFM), a photogrammetry technique that allows producing a high-resolution digital elevation model of the fault zone. 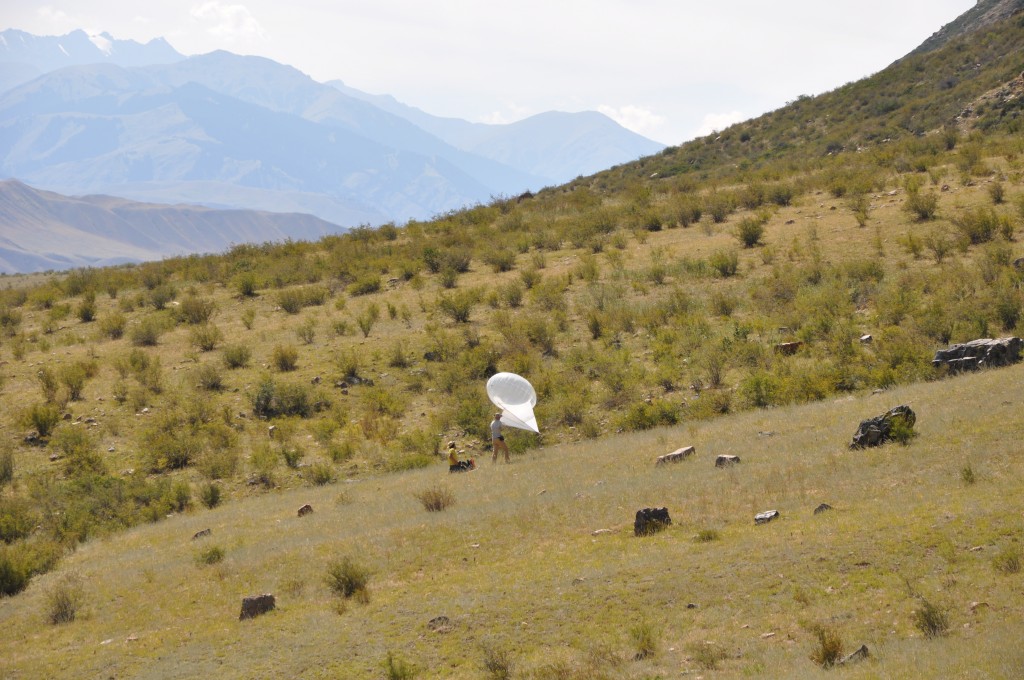 We found that the fault is expressed by both horizontal and vertical offsets of geomorphic markers. A spectacular example is a deeply-incised stream with clear left-lateral displacement. We covered the stream with a drone survey and we dug a pit into the fan next to it. The fan is covered with loess, overlying alluvial gravels. The loess must have been deposited after the stream had incised. We took samples from the base of the loess for optical stimulated luminescense (OSL) dating. This allows determining the timing of the incision and therefore, estimating the horizontal slip rate.

Saty on the south bank of the Chilik river, the offset stream is in the foreground to the left.

Vertically offset alluvial fans were found further to the East. We measured the vertical throw and dug another two sampling pits into the alluvial material. Buried snail shells and charcoal samples will be used for radiocarbon dating of the fan surface – again allowing us to determine the slip rate. 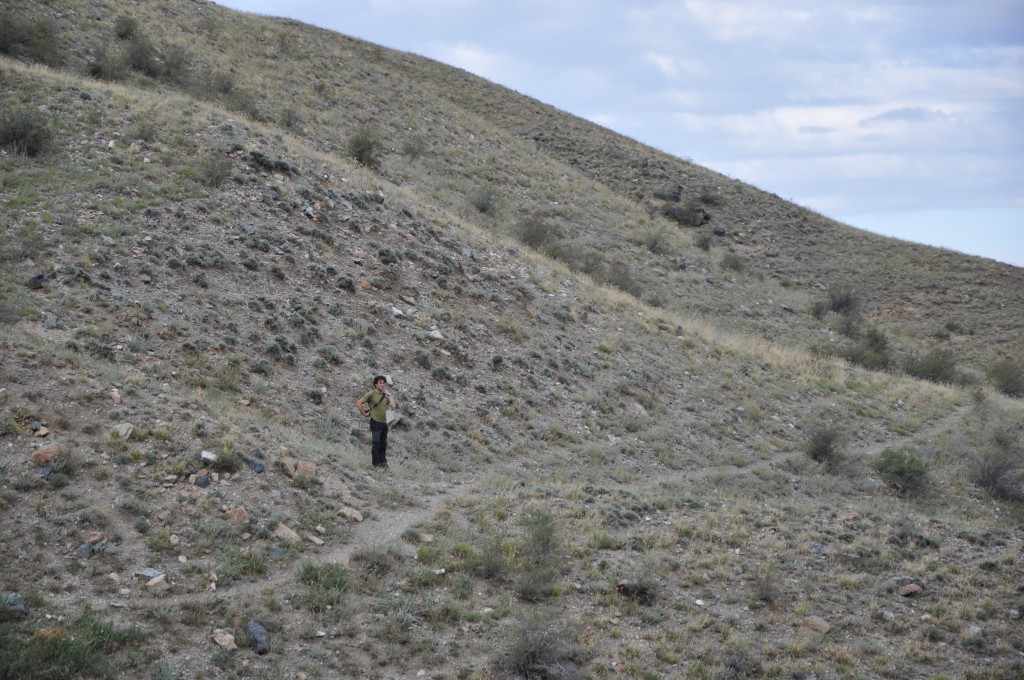 David Mackenzie in front of the fault scarp. 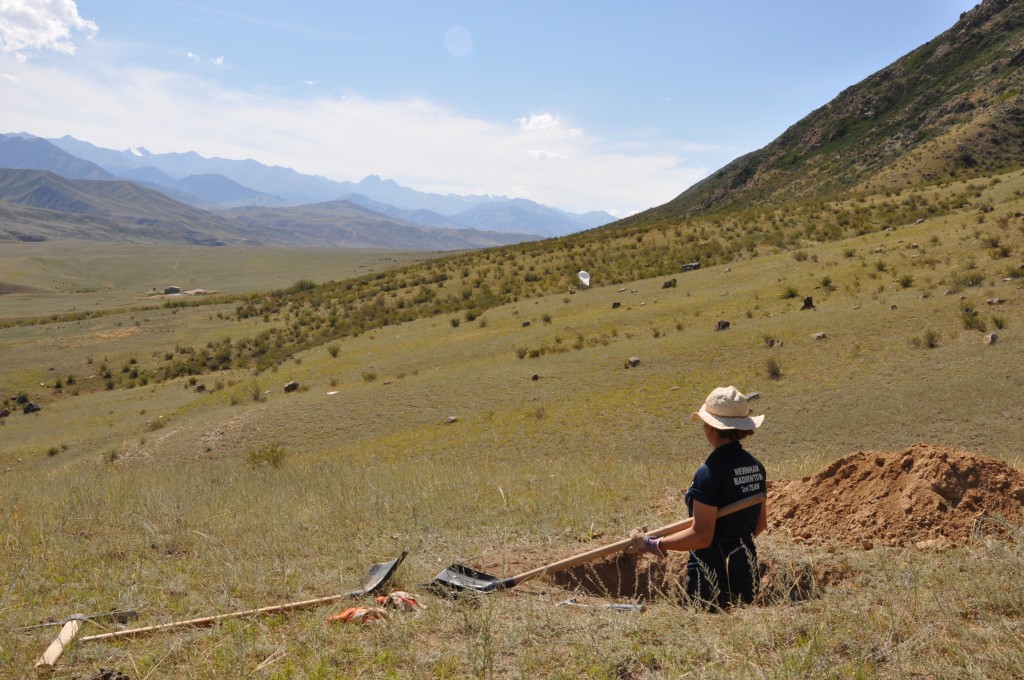 The fault extends beyond the Saty valley and crosses a hill on which sackungen can be observed – small graben-like features that can form during strong ground motions. 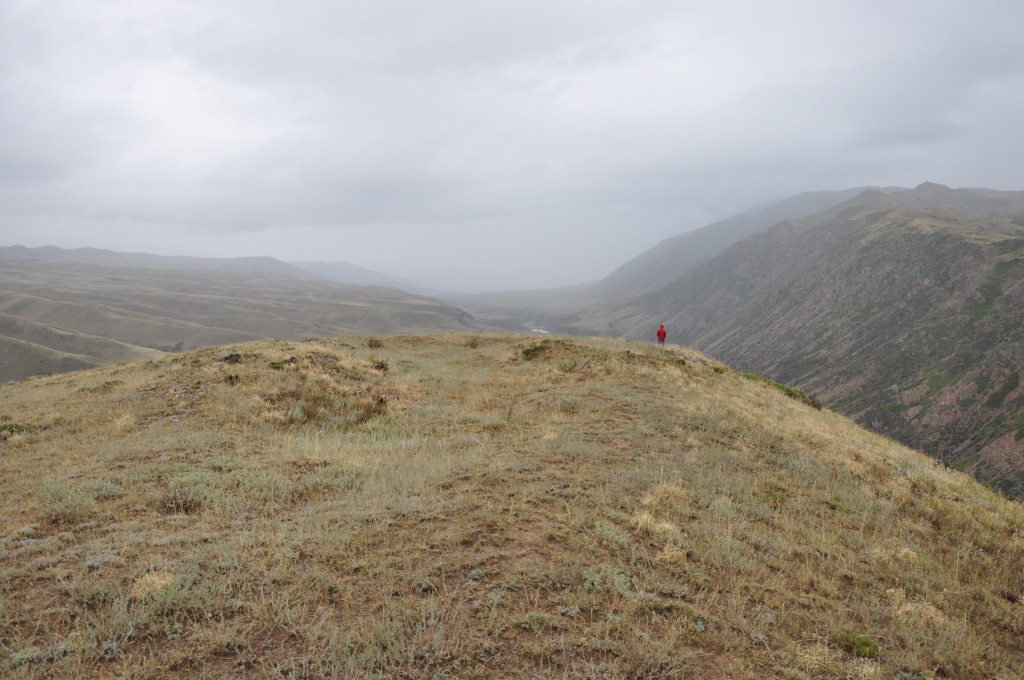 Sackungen on top of a hill at the eastern end of the valley.

View from the top of the hill towards the South.

Finally, we visited Lake Kaiyndy. This lake was created after a large slope failure had blocked the valley. The trees on the valley floor drowned and were preserved in the water. Now the river cuts down into the landslide dam and consequently the lake level drops and the trees become exposed. One can clearly distinguish different paleo-lake levels from the state of preservation of the trees. This means that the lake level doesn’t drop constantly, but episodically, and probably accompanied by flooding events. The landslide that blocked the river is said to have been caused by a strong earthquake around 100 years ago, but this remains to be proven… 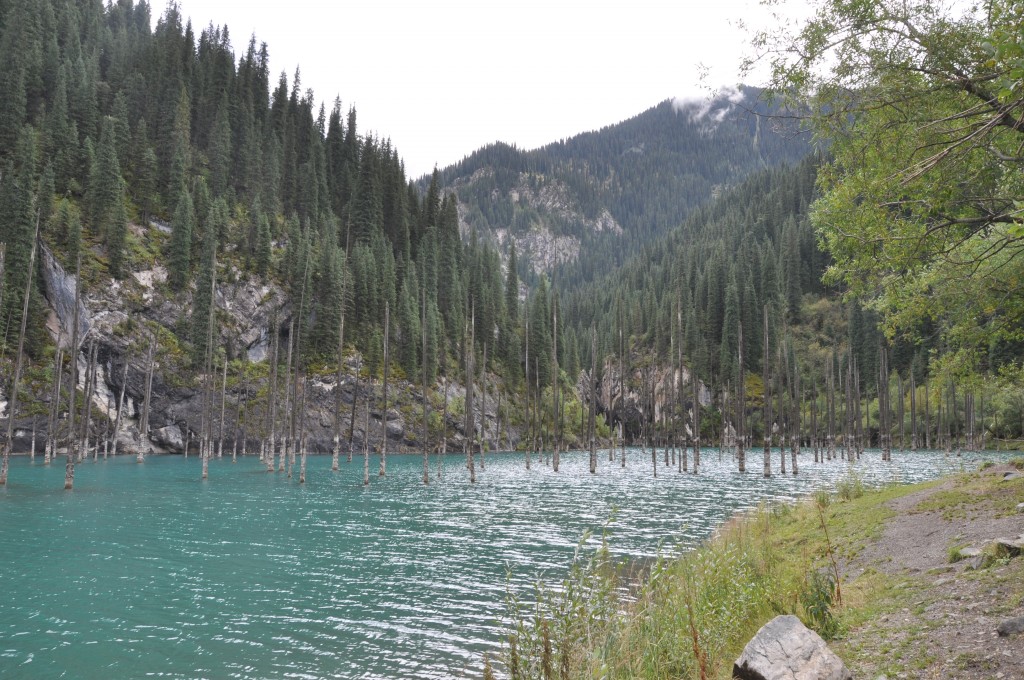 Kaiyndy lake with the drowned forest. 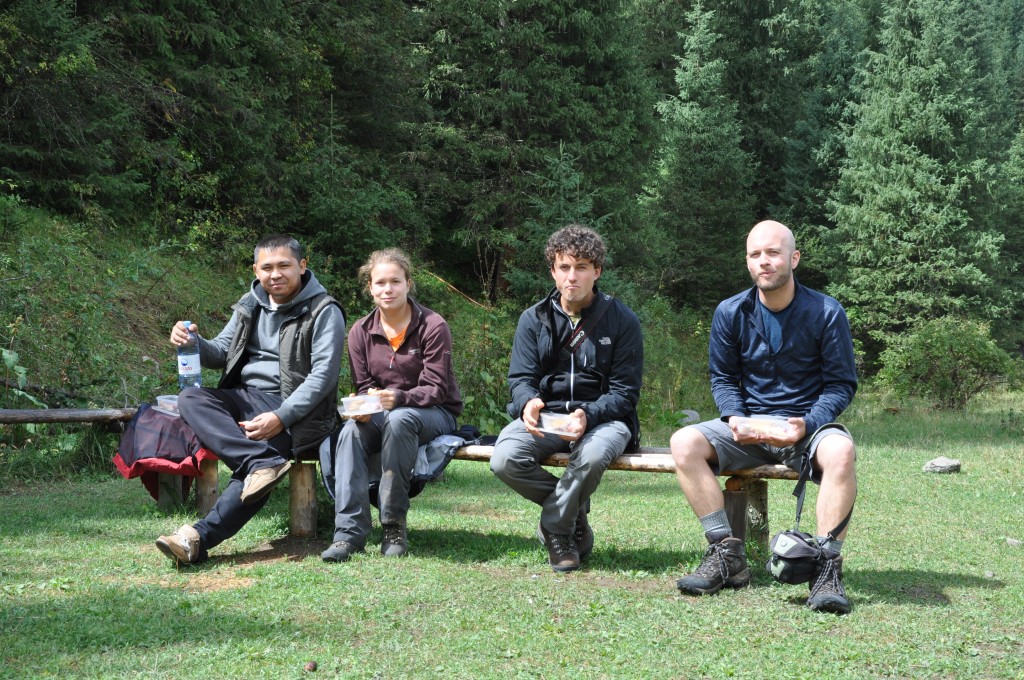 The field work team without Christoph Grützner who took the photo.

We’d like to thank our collaborators Kanatbek Abdrakhmatov from Bishkek and Aidyn Mukambayev from Almaty. The field was successful not least because of Sagyn, our great driver, and Aynagul, who did cook the most delicious meals in our camp. 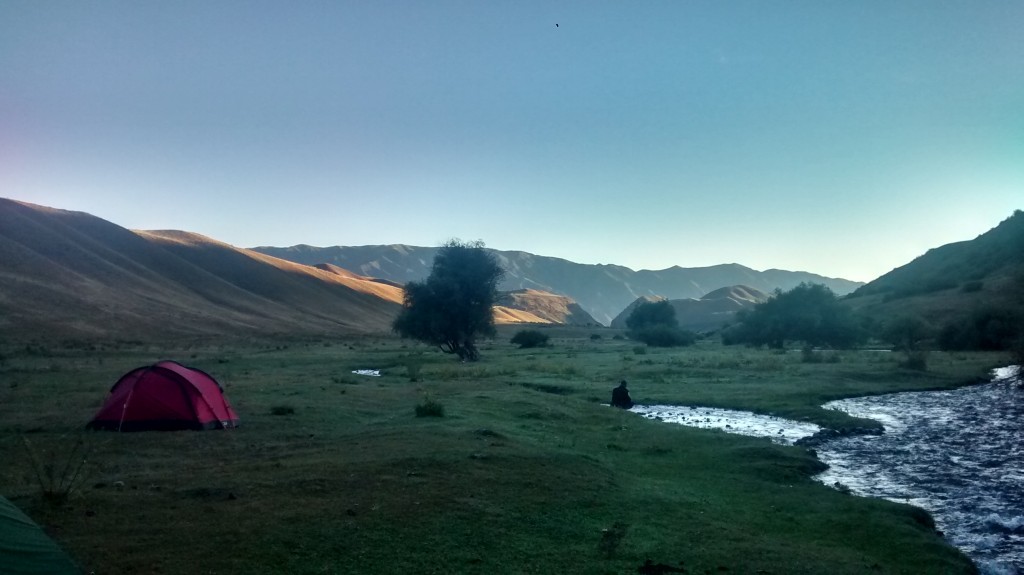