By John Elliott (University of Oxford)

Recently published work shows that there is significant remaining seismic hazard at the city of Van resulting from the relatively deep rupture of the previous earthquake from 2011.

In October 2011 a magnitude 7.1 earthquake struck the cities of Van & Ecriş in Eastern Turkey killing over 600 people. Using satellite radar measurements, we were able to precisely map the fault segments that ruptured in this event.. These observations were critical in showing that the slip in the earthquake remained buried between 8 and 20 km underground. However, this leaves a large shallow portion of the fault nearer the surface that has not broken, and field observations show that this fault is capable of rupturing in earthquakes, posing a continuing hazard to this city of a million people.

Earthquakes continue to surprise in their location and size, such as the 2010-2011 Christchurch earthquakes in New Zealand, which occurred on unknown faults. The Van earthquake also occurred on previously unmapped faults, highlighting the need to undertake basic mapping of active fault structures, as well as measure regions building up strain that might rupture in the future. 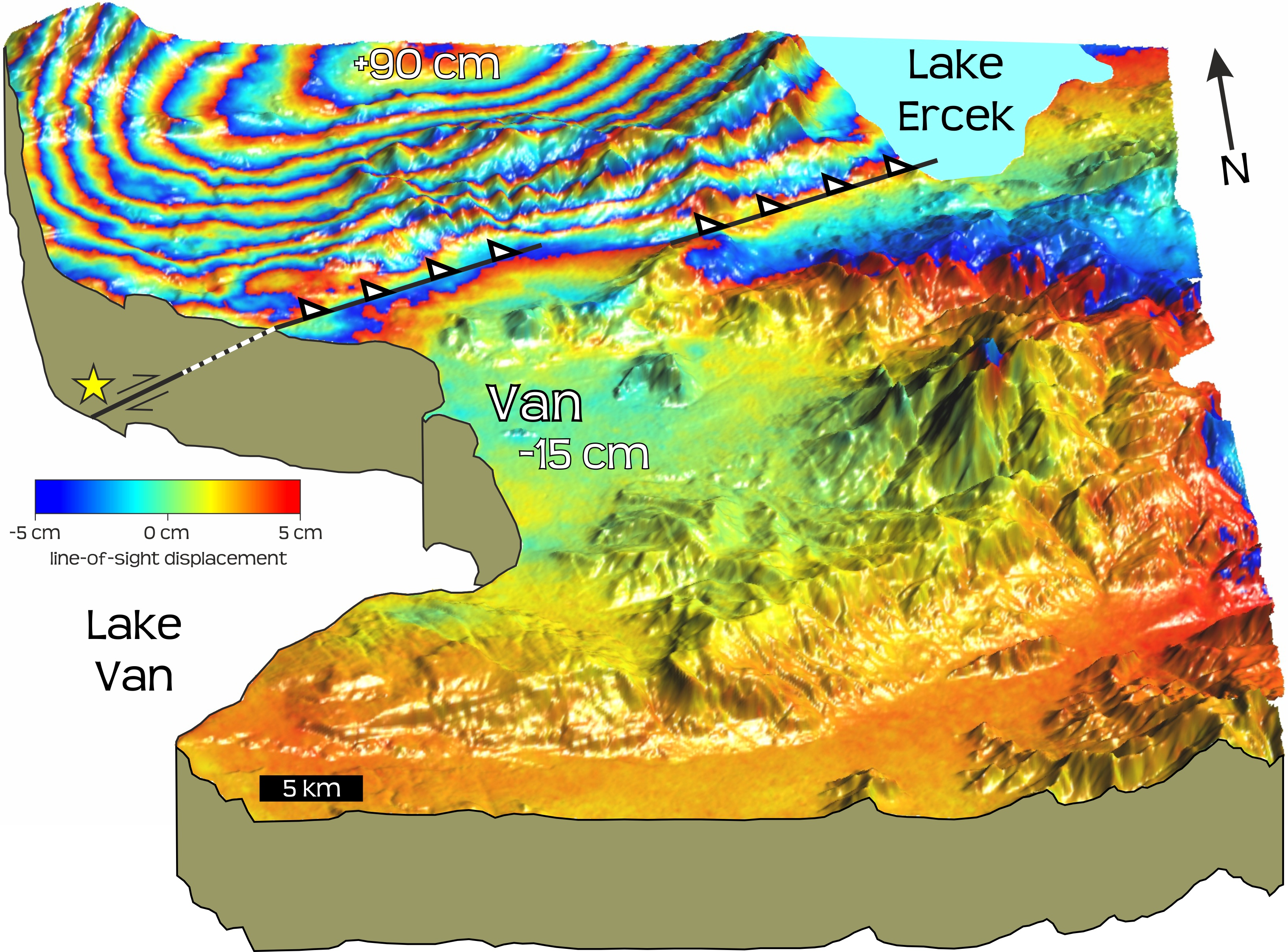 Figure 1: Perspective view of the ground deformation due to the October 2011 magnitude 7.1 earthquake which struck the city of Van in Eastern Turkey. The rainbow colours show 10 cm contours of ground motion (up to 90 cm uplift in the mountains north of Van and 15 cm of subsidence under the city itself). This deformation is measured using the Italian X-band radar satellite COSMO-SkyMed. With this high resolution data, the precise location of the faults (black lines and white triangles) on which the earthquake occurred (yellow star at 15 km depth) can be found. This highlights which portions of the fault ruptured in the quake, and more importantly for examining future seismic hazard, which portions did not break – in this case the shallow sections of the fault (dashed line), nearer the city of Van.

The InSAR data presented here (Figure 1) permit us to determine an accurate location and the depth extent of faulting for the 23 October Mw 7.1 earthquake as 8–20 km, along a pair of fault planes, each 14 km in length. This relatively deep earthquake leaves an unruptured upper portion of the fault in the shallow crust, which is now under greater stress from this deeper slip. 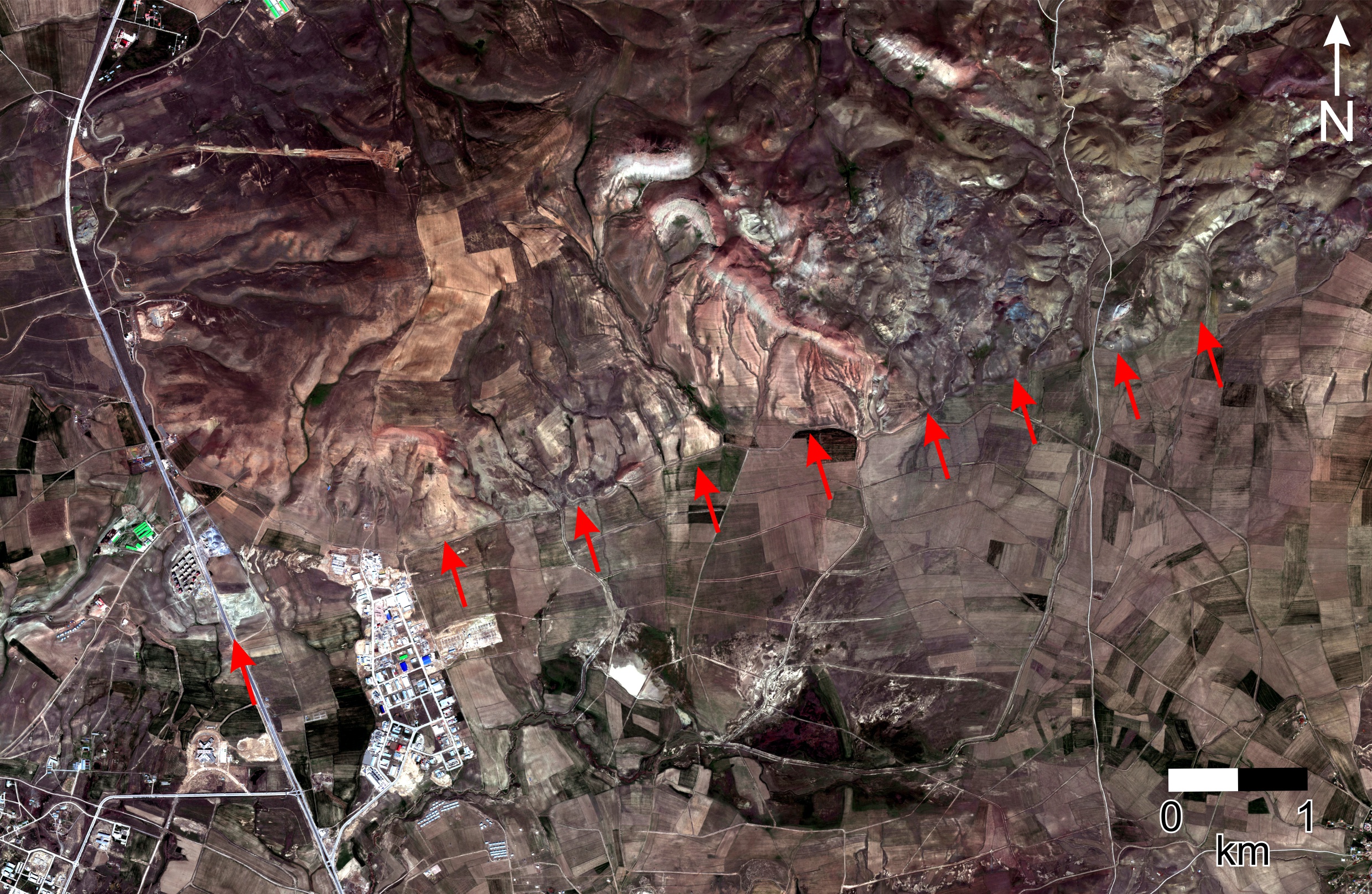 Figure 2: World-View 2 satellite imagery of the western fault segment, 10 km north of Van. The fault trace runs almost east-west (red arrows – the western most arrow is the location of figure 3). The surface geomorphology of the fault scarp is relatively clear in retrospect as there is a change in river incision moving from the south (flat agricultural fields) to the north across the fault (deeper stream and river valleys). This change in river cutting is due to the uplift of the hillside north of the fault from past earthquakes which push up the mountains. In the 2011 earthquake, the mountains to the north grew higher by almost 1 m.

The projection of these fault segments to the surface is just 10 km north of Van (Figure 2). For such a large earthquake, very little of the slip occurred at the surface (Figure 3a) – the maximum slip of 9 m occurred at 14 km depth. However, given that the surface trace of the fault is clearly visible in the geomorphology of the mountain range to the north of Van and that fault gouge was found in Quaternary sediments at the surface (Figure 3b), it is very likely that the upper portion of the crust is seismogenic, and could still break in the near future. 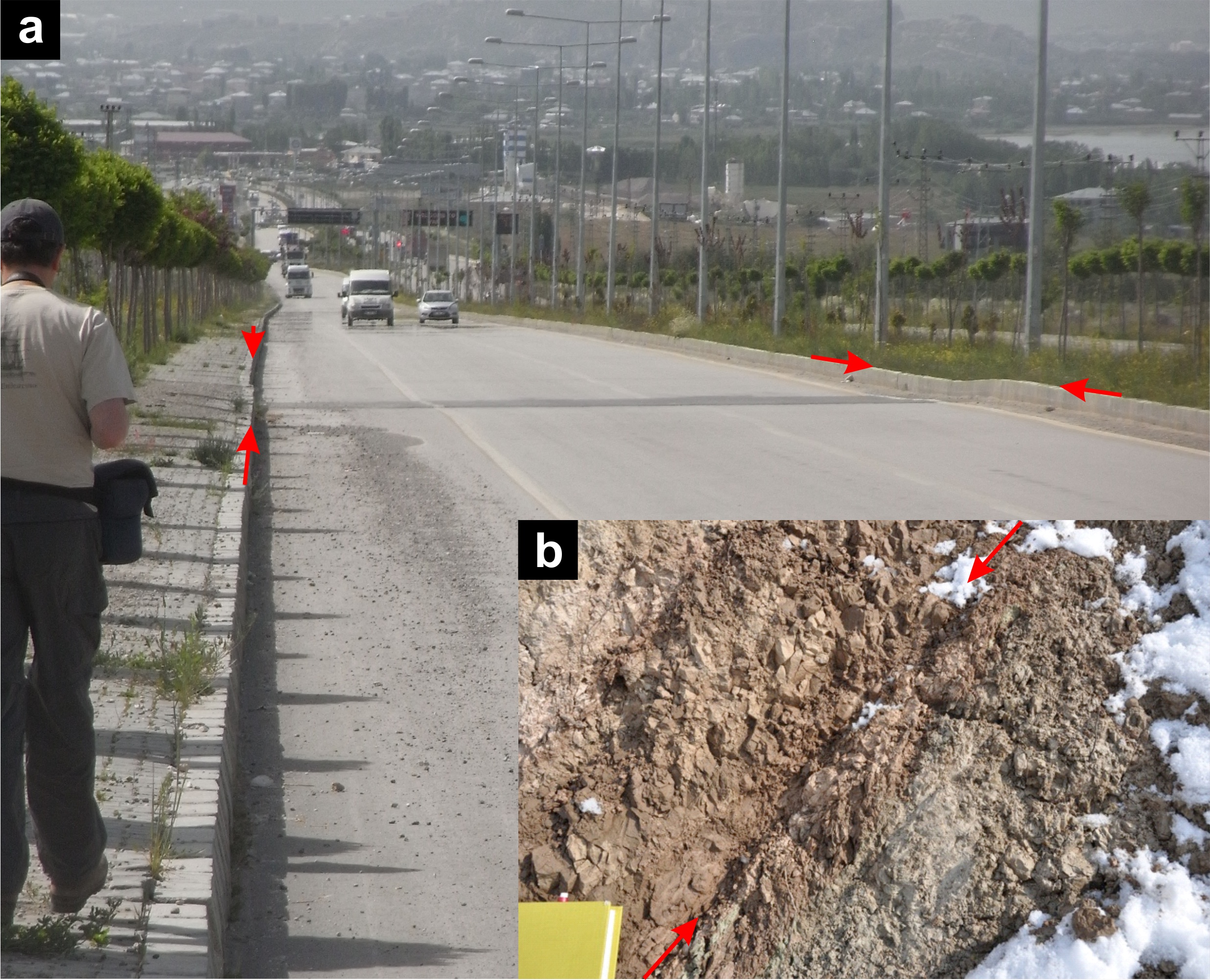 Figure 3: (a) The slip motion on this fault at the surface is very small for such a large earthquake. The previously straight kerbstone moved a few centimetres to the left and down on the south side by less than 10 cm (red arrows). The small movements of the fault at the surface indicate most of the slip in the earthquake remained deeply buried. Photo Credit: John Elliott, June 2013. (b) Image of the sediments in the road cutting where the fault crosses the road shown in (a). This shows a line (marked by red arrows) cutting though these soft sediments that has been created by past motion on this fault. This fault gouge dips to the north by about 50 degrees, matching the dip of the depper fault which slipped in the 2011 earthquake and that was found from modelling the InSAR deformation data shown in figure 1. Photo Credit: Kate Scharer, November 2011.

A hiatus of months to years in rupture between two similarly sized earthquakes is not unprecedented, as found for a pair of equal sized earthquakes in China which occurred on the same fault – the first deeper in 2008, and the second much shallower ten months later in 2009.