Kazakhstan is a final frontier in understanding Central Asian neotectonics related to the India-Eurasia collision. This vast, enigmatic country comprises many major active faults and consequently is no stranger to earthquakes, having suffered a series of catastrophic events within the last 125 years. Despite this stark earthquake hazard, there is a need and opportunity to develop an understanding of this region through integration of fieldwork with modern space-based observations from satellite imagery, Global Positioning System (GPS)  networks and Interferometric Synthetic Aperture Radar (InSAR).
Our observations of high resolution satellite imagery and in the field not only reveal many
previously unidentified major active faults (defined as those which offset late Quaternary features such as abandoned alluvial fan surfaces) but also a majority of other large faults that although are recognised structures, are not considered active. Essentially, nothing is known of the earthquake repeat times or slip rates on these faults, which due to their close proximity to towns and highly populated cities, pose a very serious and realistic seismic hazard.

.
If we hope to help increase Kazakhstan’s resilience to earthquakes and their hazardous secondary effects such as landslides, a first step must be to properly identify and characterise in detail the seismogenic faults of this country. 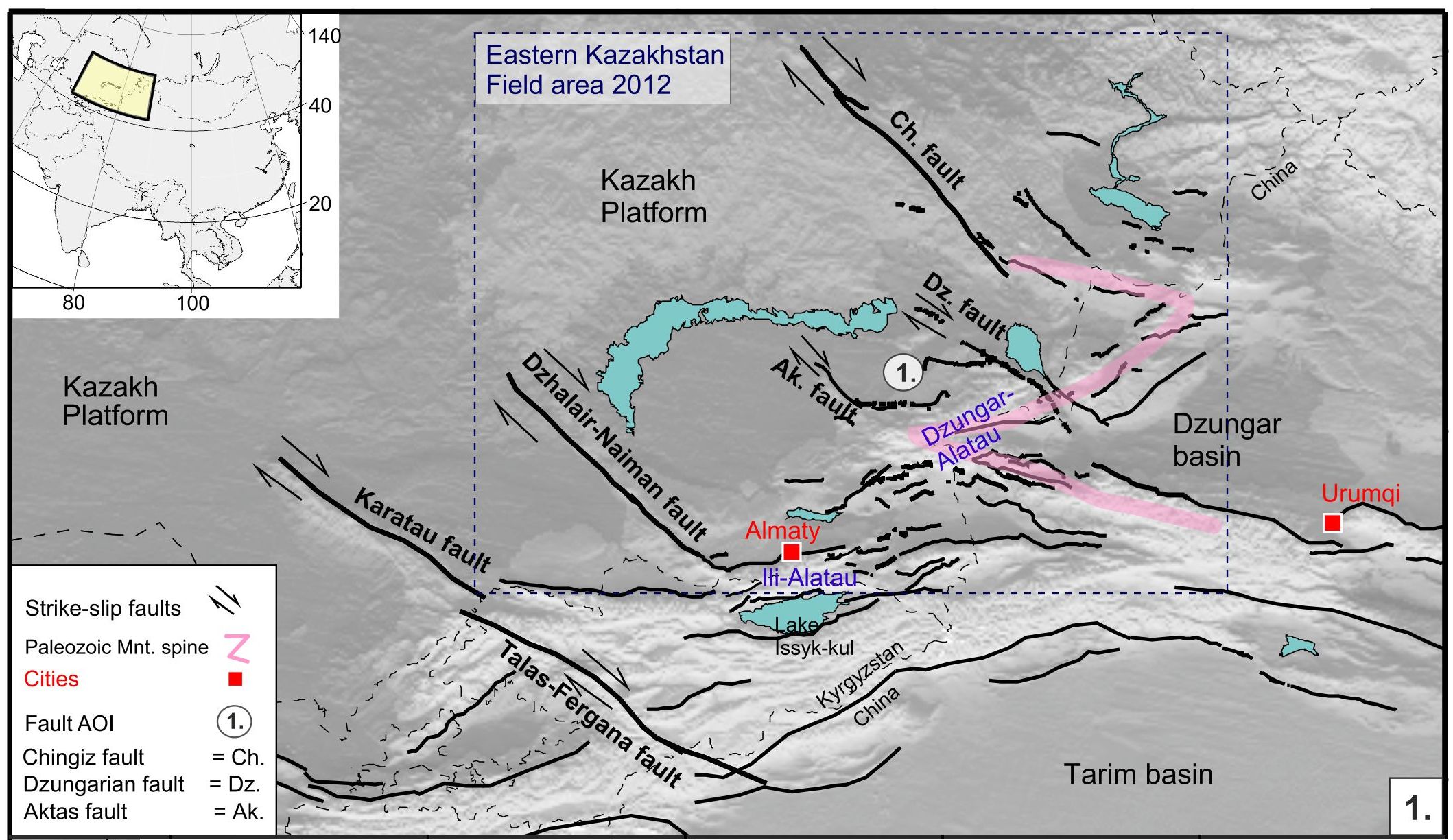 The focus of our research lies in eastern Kazakhstan (Fig. 1), a region characterised by several different mountain range orientations, which together form a Z-shaped Paleozoic mountain spine spanning over 800 km from S to N. The different ranges are interspersed amongst rolling, golden steppe-land and late Cenozoic sedimentary basins. This unusual mountain-range configuration is controlled by the active tectonics of the region. Major strike-slip faults extend for hundreds of kilometres, cutting through the high mountains and often radiating from the high mountains into the flat desert plains of the Kazakh platform (Fig. 1). We find that right-lateral faults are predominantly oriented NW-SE, and left-lateral and reverse faults are predominantly orientated E-W. Movement on these faults, particularly since the beginning of the most recent period of mountain building
activity (~25 Ma), has resulted in the stunning 4,000 m snow-capped peaks of the Ili-Alatau and Dzungar-Alatau mountain ranges. These same fault movements have also resulted in devastating earthquakes such as the 1911 Chon-Kemin event (Mw ~8.2), which destroyed Kazakhstan’s former capital city, Almaty.

.
The scientific team this September consisted of five UK researchers (Dr. Richard Walker and two first year PhD students David Mackenzie and Tim Middleton from Univ. Oxford, and Prof James Jackson and myself, from Univ. Cambridge) and Professor Kanatbek Abdrakhmatov, Director of the Institute of Seismology in the Kyrgyz Republic National Academy of Sciences, Bishkek. Also on-board was expert off-road driver (Ivan) and camp manager/cook (Inagul). The Institute of Geophysical Research, National Nuclear Centre of the Kazakhstan Republic supported our trip and hosted us in Almaty. We also had a promising first meeting with academics from the Kazakh British Technological University (KBTU), Almaty, who this year, for the first time have opened a Department of Geology.

The ~7-10 m vertical scarp cuts through Paleozoic mountain ridges in the high Dzungar-Alatau in the faults eastern extent, there is also a ~3 m right-lateral component. This overall offset has blocked drainage forming inter-ridge ponds.

A major component of our work this summer involved making a detailed investigation a major fault, which extends over 100 km E-W from the high Dzungar-Alatau mountains into the flat Kazakh platform. Along the faults length, a consistent ~7 to 10 m scarp is impeccably preserved offsetting Paleozoic mountain ridges (Fig. 2) and along the range front in its eastern extent, and as a single ~7 m vertical step within otherwise flat-lying, vegetated desert loess in its western extent (Fig. 3).  Along the length of the fault, ponds have formed where drainage is blocked by the vertical offset. In particular we were interested in a ‘ghost’ river channel which was abandoned by uplift on this fault (Fig.4).
Based on the continuity and consistency of the scarp height over the entire fault-length it is likely that this fault scarp was formed during one very large, catastrophic earthquake. To test this hypothesis, we collected sediment samples from the base of several dried-pond sites in the east and west of the fault and from the abandoned ‘ghost’ river channel. If this was indeed one event, then the ages of these samples should be the same. Using the date of this event and quantitative measurements of the amount and sense of displacement found using field-surveyed digital elevation models (DEMs) we can calculate a minimum late Quaternary slip-rate, which will provide the first ever constraint on the seismic hazard of this fault. 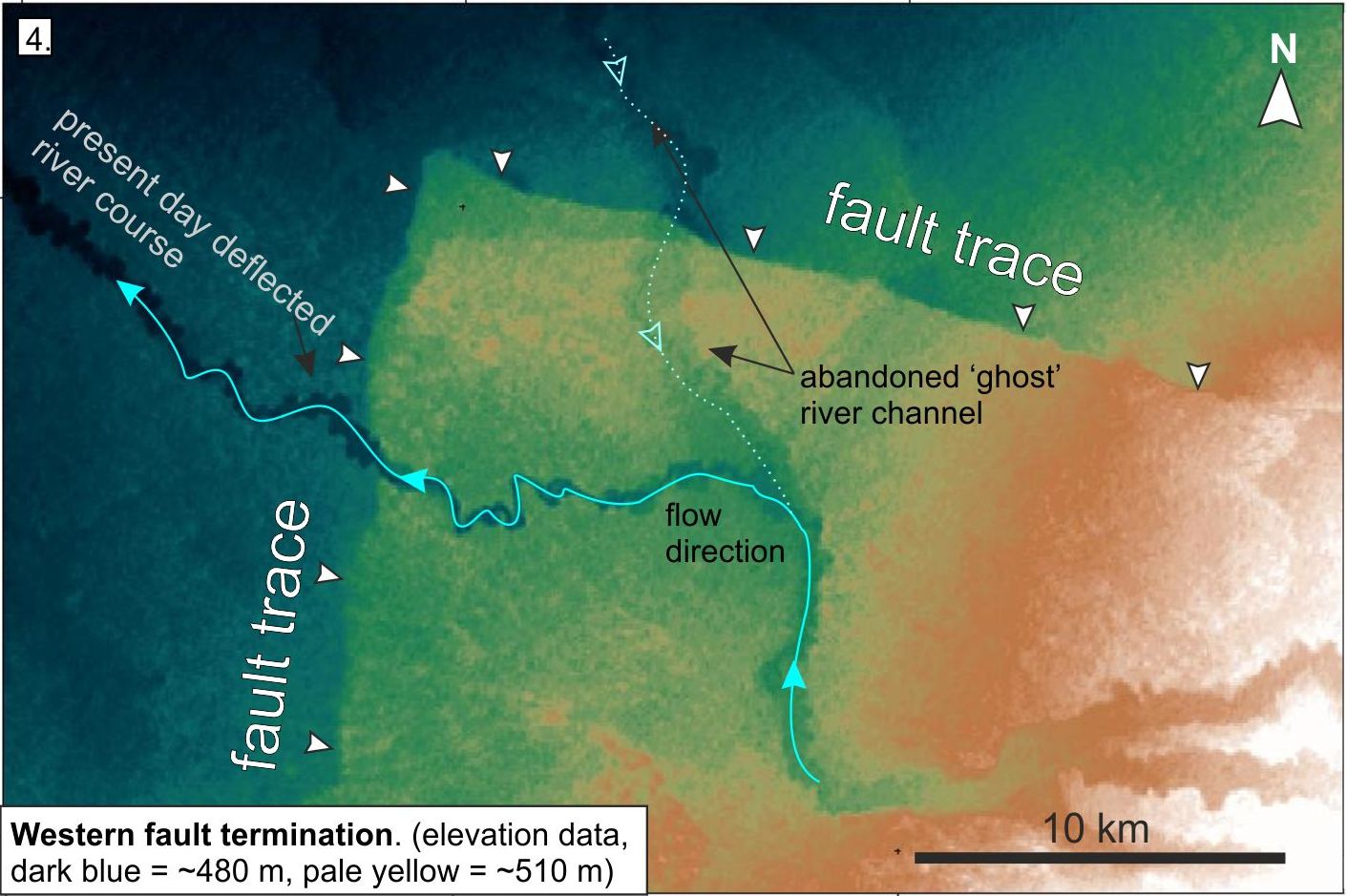 Digital elevation data highlights the ‘right angle’ fault termination in the Kazakh Platform. This fault geometry and offset has caused the abandonment of a river channel in which flow orginally ran from N to S. The offset caused by this paleo-earthquake blocked the original drainage, forming ponds against the upthrown (S) side.

Closer to Almaty, we made preliminary field observations of a major right-lateral strike-slip fault, Dzhalair-Naiman (Fig. 1), which extends over 400 km NW-SE into the Kazakh Platform, and finally we conducted several slip-rate studies along the E-W oriented Zailisky-Alatau range front (part of the Ili-Alatau mountain range) which forms the snow-capped backdrop south of Almaty. In particular, the fault scarps investigated at these final sites may be potential paleo-rupture candidates for the historic Mw ~7 to 8 earthquake which devastated Almaty (formerly Verny) in 1887.