New Zealand is a country with a high rate of tectonic activity, such that earthquakes are an ever-present hazard across much of the country.  In South Island the most important geological structure is the Alpine Fault, which runs for about 500 km along the west side of the mountain chain before splitting into a series of faults (known as the Marlborough fault system) that cross the northern part of the land mass (image from the University of Otago):

Technically, the fault is a right-lateral strike-slip fault, which allows the Pacific Plate to the east to slip past the Indo-Australian plate to the west.  However, the fault also accommodates substantial convergence, meaning that there is a thrusting component that is responsible for the uplift of the Southern Alps.  The average rate of slip along the fault is about 30 mm per year, which is relatively quick for such a system.

The fault is often difficult to observe directly as the rate of erosion and deposition in New Zealand means that it is often buried.  However, at Hare Mare creek, not far from Franz Josef, the fault is exposed on the side of the valley: 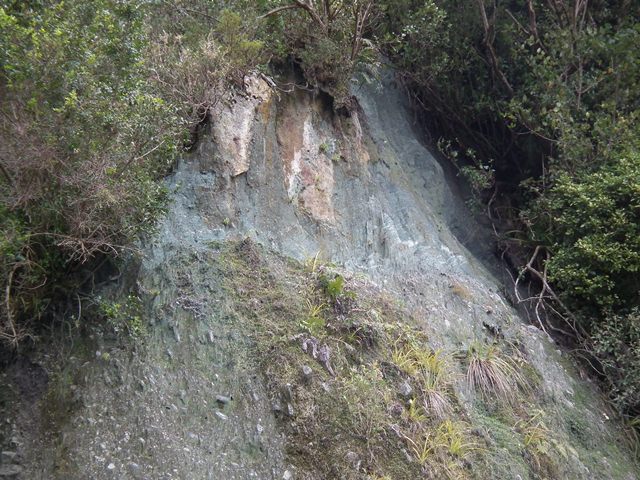 At this location, bedrock (consisting of a hydrothermally altered basal cataclasite overlain by a sequence of fractured mylonites) can be seen thrust over young river gravels.