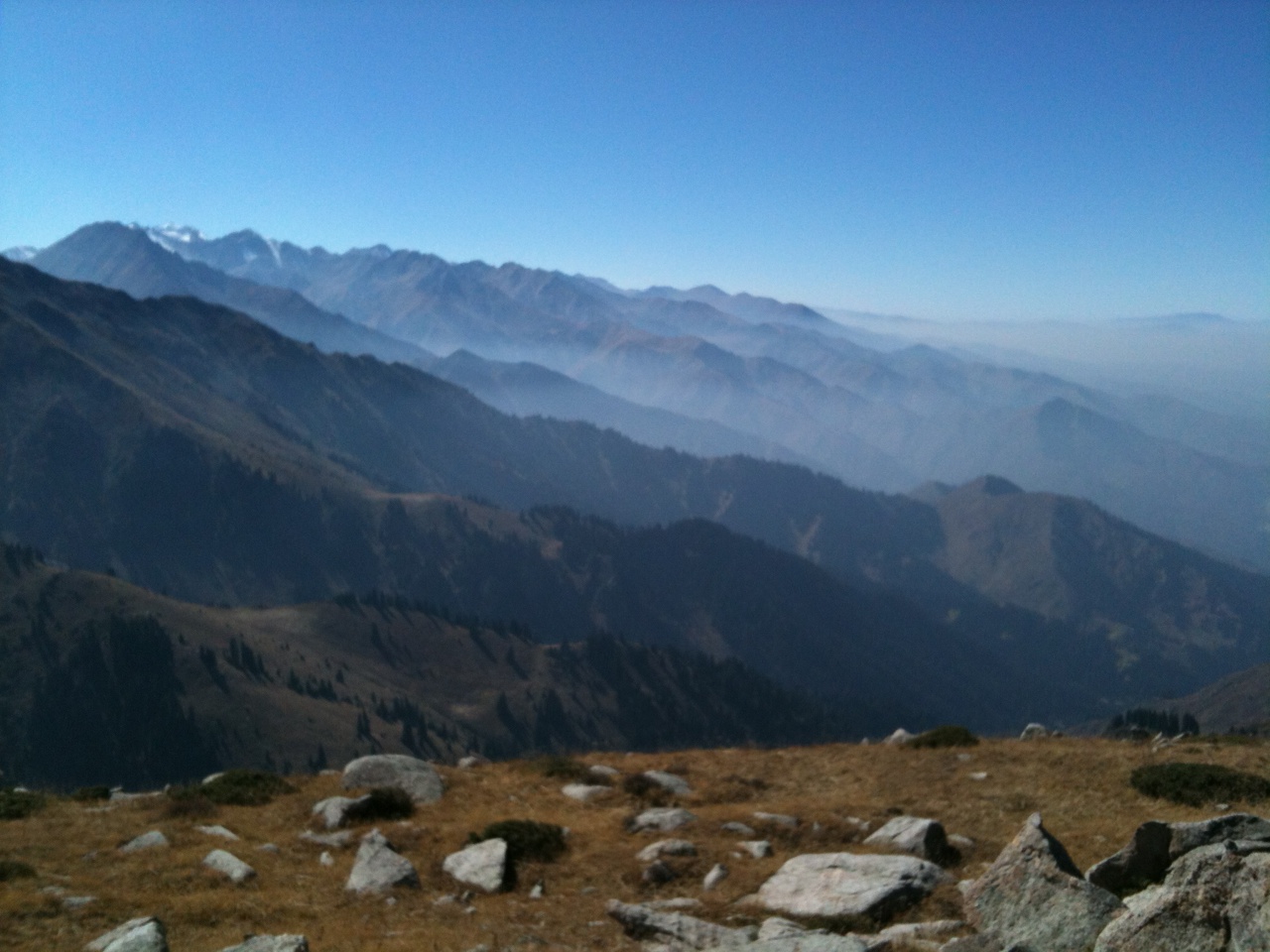 View to the west of the Zailisky Alatau range, from the 4000+ m peaks near the range crest on the left to the hazy lowlands on the right. The city of Almaty is out of view to the right.

It is hard to miss the mountains in Almaty, Kazakhstan. If you look south between the trees and the tall buildings rising all around the city, you can catch a glimpse of the snowy peaks of the Zailisky Alatau from nearly everywhere in the city. They rise to nearly 5000 m, and President Nursultan Nazarbayev climbed to the top of one of the highest in 1995. But although the mountains give Almaty a pleasing set of views, a nearby ski resort, and plenty of opportunities to escape the city for the cool alpine air, they are the direct evidence of one of the biggest threats facing the city: earthquakes.

The Zailisky Alatau reach such picturesque elevations because of the presence of one (or more) active thrust faults along the base of the range. These faults, which have not been mapped in detail but which must lie close to the city’s affluent southern suburbs, have gradually built up the range through repeated earthquakes. Almaty was destroyed or damaged by earthquakes three times in the last 125 years, most recently in 1911, and while the precise sizes and locations of these events are not known, it is inevitable that future damaging earthquakes will occur. This fact is not lost on the city’s population – conversations over the last few days have shown a sophisticated understanding that earthquakes are a major hazard. Indeed, the threat of natural disasters is one oft-cited reason for the 1997 decision to move the Kazakh capital to Astana, far to the north in a geologically-uneventful location on the steppe. 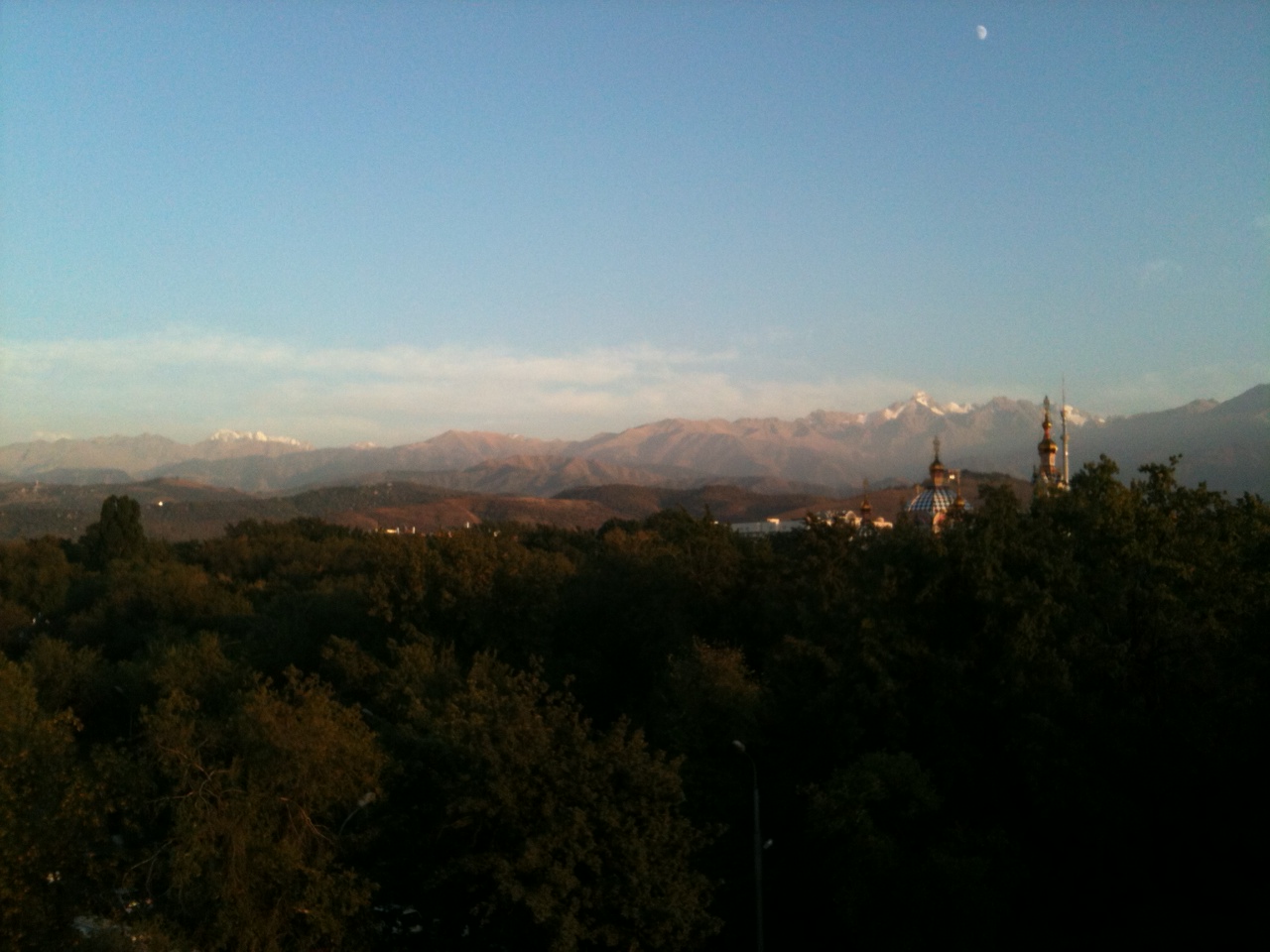 View of the Zailisky Alatau from Almaty city. The snow-capped mountain on the left is Talgar Peak, while that on the right is Nursultan Peak. In the foreground is Panfilov Park and the towers of The Zenkov Cathedral.

Worryingly, the city may be becoming less resilient to future earthquakes as it grows. Work commissioned by GeoHazards International in the 1990s showed that at least some Soviet-era apartment buildings were actually fairly resistant to damage in large earthquakes, and more importantly were designed to be relatively insensitive to variations in construction quality (a full report is available here). The centralised nature of Soviet planning also ensured that adequate space was left between residential blocks, a key factor in ensuring quick access by emergency services in the aftermath of a disaster. In contrast, the rapid post-independence development of Almaty as a regional business hub has meant that such rigorous controls have been relaxed. While planning and seismic safety codes remain on the books, some residents feel that older Soviet-era buildings are more likely to be earthquake-resistant — although they may also be seen as less desirable or prestigious places to live. The rise of a middle class in Almaty, and increasing demand for newly-built detached family homes, mark an important opportunity to ensure that earthquake resilience is on the agenda of both citizens and government agencies.

Kazakhstan is positioning itself as a regional leader in a number of areas, not least in disaster risk reduction. As one of the first two countries involved in the Central Asian Centre for Disaster Response and Risk Reduction, as a net donor to disaster response activities, and as the strongest economy in the region, it clearly has a critical role to play. One of our tasks within the EwF project will be to explore the ways in which that role can best be fulfilled.